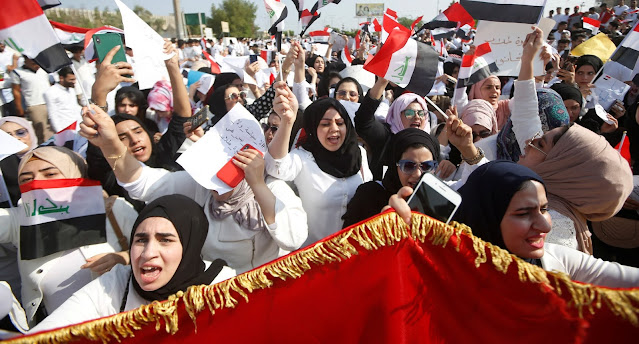 The assassination of activist Ihab al-Wazni who was a leader of demonstrations in Karbala has led to several of the new protest parties to withdraw from this year’s election and calls for a general boycott of the vote.

Wazni was killed at the start of May outside of his house in Karbala. Immediately protest groups in Dhi Qar and Baghdad said they would not vote in the October elections as a result. The next day at least three parties that were formed out of the demonstrations announced they were withdrawing from the vote along with the Iraqi Communist Party. There has been a debate amongst activists about whether to participate or not in this year’s balloting. After the death of Wazni it appears that most will not vote as another stance against the ruling parties that have not made a single serious concession and the government who hasn’t stopped any of these assassinations from happening nor prosecuted those responsible. The last parliamentary elections had the lowest voter turnout since 2005. This year’s may be even worse as the political system continues to lose legitimacy in the eyes of the youth who are the majority of the population.

Al Aalem, “The assassination of a prominent activist in Karbala, Ihab Al-Wazni, with a bullet in the head,” 5/9/21

Al Hurra, “The assassination of activist Wazani … Anger in Iraq and the momentum for boycotting the elections,” 5/9/21

- “Sadrist pressure and al-Hakim frustrate efforts to from a coalition of new parties,” 5/3/21