Review Baghdad at Sunrise, A Brigade Commander’s War in Iraq 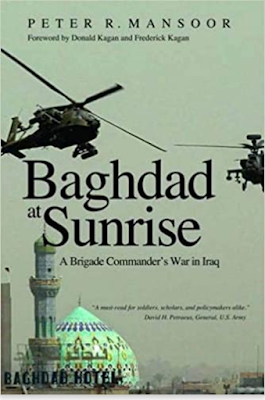 Peter Mansoor was the commander of the American 1st Brigade, 1st Armored Division which was stationed in Baghdad from 2003-2004. He wrote about his experiences in Baghdad at Sunrise, A Brigade Commander’s War in Iraq. It covers his day to day work from setting up patrols, carrying out security sweeps, meeting with local councils, etc. to his thoughts about the overall situation in the country which he was unhappy with. The lesson from the book was that early on the U.S. was winning some battles but losing the war to shape the new Iraq.

Mansoor starts off with the strategic mistakes the U.S. was committing right at the start of the occupation of Iraq. It is a very long list. For one, the U.S. lacked the troops and rules of engagement to establish law and order. The 1st Brigade for instance was given the task of securing the Rusafa and Adhamiya districts in central and northern Baghdad that covered hundreds of thousands of people. That meant the U.S. had to pick which basic duties they could carry out and neglect many others and were spread over too many sites they were told to protect. Second, the Coalition Provisional Authority (CPA) disbanded the Baath Party and the military and failed to fill the vacuum that created. The two decisions made thousands of Iraqis angry and fueled the insurgency and militias who were against to the U.S. presence. Both moves and the push to create a democracy also alienated Sunnis who’d ruled Iraq since its creation in the 1920s. They were a minority so they were never going to have real power again and were therefore opposed to the new Iraq. The CPA never came up with a way to bring them into the new country being built. Third, the only way to effectively counter a guerrilla war is to have intelligence and the Americans were sorely lacking. U.S. intelligence agencies were focused upon high tech surveillance through satellites for example that had no real impact upon Iraq. The Americans had to convince Iraqis to provide them with information and effectively interrogate the ones that were detained. The U.S. struggled with both. Mansoor wrote that the Bush administration didn’t understand that toppling Saddam wasn’t the same as stabilizing Iraq. It had no real plans for the postwar situation as a result and did everything on an ad hoc basis which was lacking in “insight and imagination.” Overall, the book points out that the U.S. occupation fostered armed resistance, political opposition and failed to secure the country in just the first months.

The other major issue included in Baghdad at Sunrise was Mansoor’s suggestions for how to get Iraq right. His main idea was to do the opposite of what the CPA was doing, namely work from the bottom up in Iraqi society. That included starting with the creation of local councils and moving up from there instead of pushing national elections. Second was to make reconstruction projects in neighborhoods and districts instead of the huge long term development programs the CPA engaged in that gave contracts to major American corporations and would not be felt by the public for years. Last was to secure the population in a counterinsurgency campaign. The U.S. had learned and then purposely forgotten this lesson after Vietnam and focused upon conventional warfare with the Soviet Union or China. These all needed to be folded together in a comprehensive program of intelligence, civilian expertise, local building projects, etc. Mansoor called this a revolution in thinking by the U.S. military which would need to be institutionalized because the next war would likely be similar to Iraq. Mansoor had the rare opportunity to practice what he preached when he became the main aide to General David Petraeus during the 2007 Surge in Iraq. Unfortunately the American military is trying to once again forget this war and wants to focus upon getting the latest aircraft carrier and stealth fighter to take on a great power.

Baghdad at Sunrise is an interesting read. There are many books that cover the political failures the U.S. faced in Iraq during the occupation but not as many that look at the military side of things. Mansoor had a front row seat to what was going on as he was a commander in Baghdad during the first year the U.S. was in Iraq. Much of his writing is about the seemingly mundane responsibilities of an officer. He has to go to meetings with Iraqis, confer with his superiors, orders operations, etc. Within that however Mansoor made some keen observations about the many things the U.S. was doing wrong in the country and his ideas on how to reverse the situation. It took years for the Americans to change their approach to the great detriment of both countries and some issues like the rebuilding they never really solved. The author covers many of the original sins that led to this predicament.