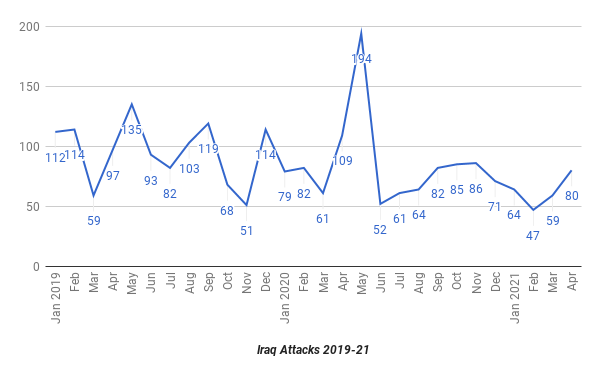 April ended five months of relative quiet in Iraq. Starting in November 2020 the Islamic State went into hibernation during the winter with most weeks only have single digit attacks. In April Ramadan occurred and that began the annual insurgent offensive. At the same time pro-Iran groups have been picking up their operations against American targets.

There were a total of 107 security incidents recorded in Iraq in April 2021. That was up from 79 in March and the most since September 2020.

Those led to 54 deaths and 132 wounded. 1 Turkish Soldier, 2 Hashd al-Shaabi, 19 civilians and 32 Iraqi Security Forces (ISF) were killed and 14 Hashd, 52 civilians and 66 ISF were injured. Diyala had the most casualties with 62. 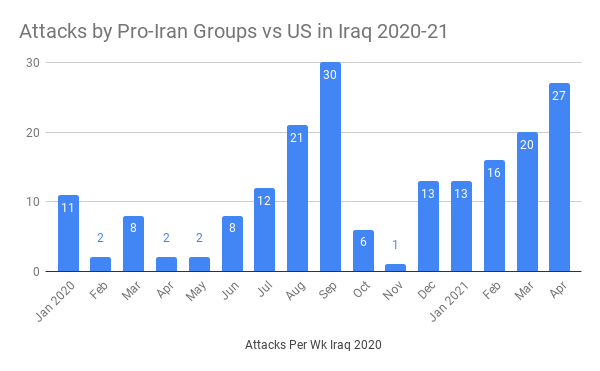 27 incidents were by pro-Iran groups. That was up from 20 in March and the most since 30 in September which was the highest monthly total since these factions began carrying out attacks. 20 convoys carrying supplies for the U.S. were hit by IEDs across Anbar (5), Babil (5), Baghdad (2), Dhi Qar (3), Diwaniya (3), Muthanna (1), and Salahaddin (1). Additionally rockets were fired at Camp Victory in Baghdad, Balad Air Base in Salahaddin twice, one of which left 3 soldiers and two civilians injured, a Turkish army base in Dohuk that killed a Turkish soldier and wounded a civilian, plus there was a drone attack upon Irbil Airport and rockets were discovered for a potential strike upon the Ain Al-Asad Air Base in Anbar. Additionally, these groups were blamed for an attack upon a checkpoint on Saudi border. These incidents showed that the groups had expanded out of southern Iraq where they used to be focused to places like Anbar, Salahaddin and Kurdistan. The Turks were a new target but some pro-Iran leaders have been complaining about the Turkish presence in Kurdistan for some time. It’s not confirmed if they were responsible for the Saudi border event but it’s a possibility as they have attacked the Gulf States before as they are rivals to Tehran. 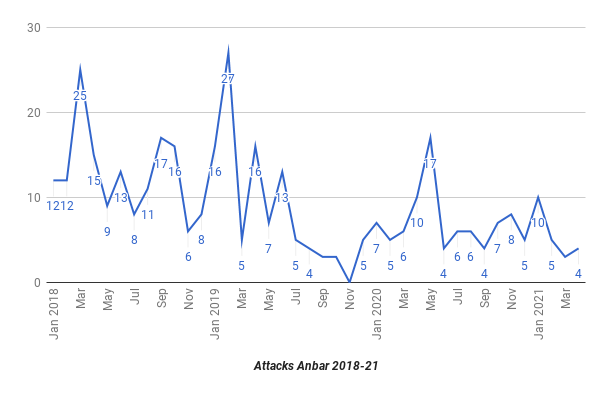 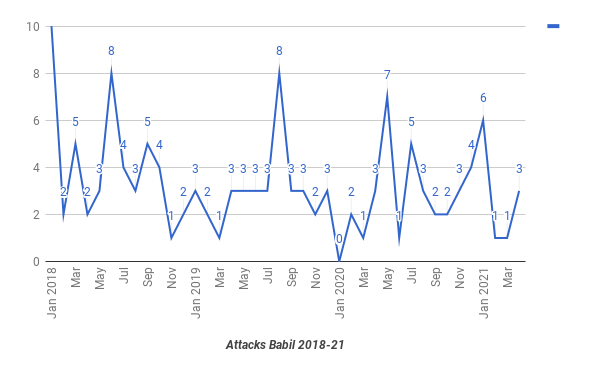 The irony of April was that pro-Tehran groups carried out more attacks in Anbar and Babil than the Islamic State. In Anbar there were just 4 incidents by the insurgents versus 7 by the pro-Tehran factions. Likewise, in Babil there were 5 incidents by pro-Iran groups and 3 by IS. The biggest insurgent events in Anbar were a car bomb which was discovered in Rutba and an army base hit by mortars. The vehicle bomb was likely headed for another part of the country. In Babil there was a gun fight, a bus was shot up, and an IED. Both provinces have some of the lowest number of attacks each month. Anbar is mostly used for logistics while the militants only infiltrate into northern Babil about once a week or so usually to hit the Hashd that are based there. 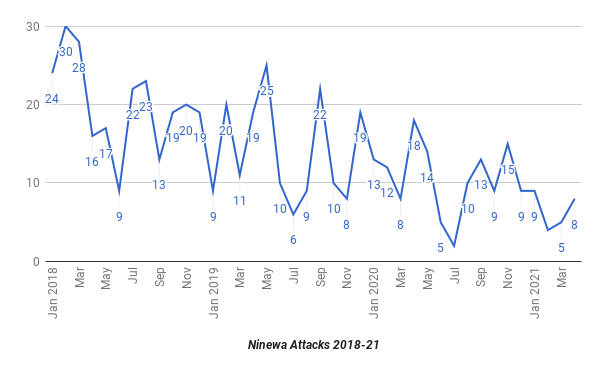 Ninewa is like Anbar with very few incidents because it’s mostly used as a transit point with Syria. Attacks did go up from 5 in March to 8 in April but they were mostly IEDs including two electricity towers being blown up. 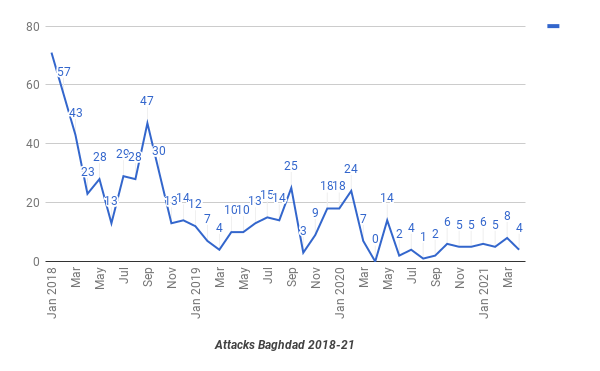 The Islamic State marked their Ramadan offensive by setting off a car bomb in Sadr City, Baghdad. The last vehicle bomb was in September 2020 and the last such attack in the capital was back in October 2017. Besides that Baghdad remains a side show for the insurgency with its emphasis upon Diyala. 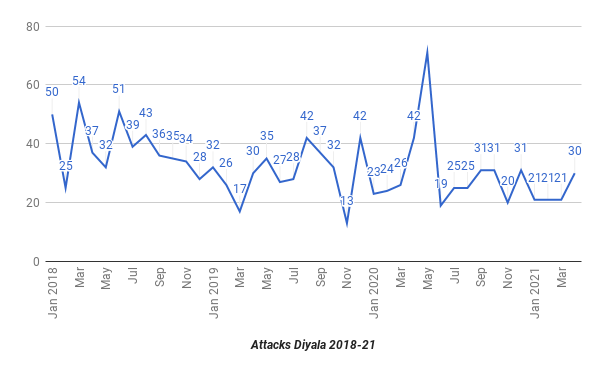 As usual Diyala was the most violent governorate in the country with 30 attacks. That included two towns being attacked with another four hit by mortars, four assaults on checkpoints, and three gun battles. 14 of those incidents were in the Muqdadiya district in the center and 11 in the Khanaqin district in the northeast. That’s where the Islamic State is based in Iraq. It has de facto control of many of the rural areas in those places, has driven out populations, and set up camps to rebuild. 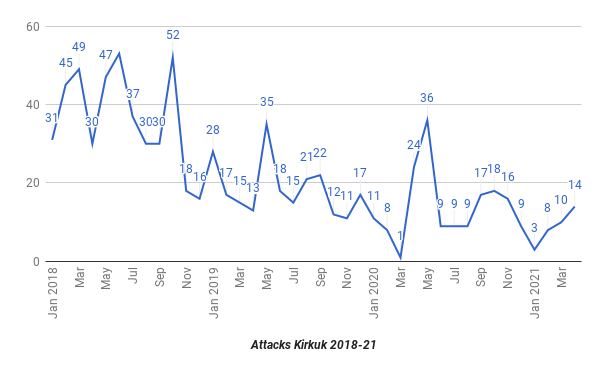 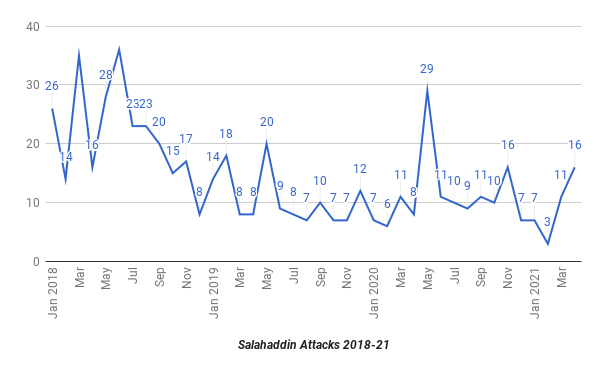 Kirkuk and Salahaddin saw the biggest uptick in attacks over the last few months. There were just 3 incidents in Kirkuk in January. That then went up to 8 in February, 10 in March, and 14 in April. A town was attacked, two checkpoints were hit and there were three gun fights last month. The Bai Hassan oil field was also bombed. There were 3 incidents in Salahaddin in February, 11 in March, and 16 in April marked by 6 shoot outs. The militants were never expelled from south Kirkuk where most of the violence takes place. There are also bases in the Hamrin Mountains that stretch from Salahaddin to Diyala.

Finally rockets were fired into southern Sulaymaniya. IS has occasionally hit Kurdistan looking for targets of opportunity. For a while they were striking Irbil for instance earlier in the year.

Al Aalem, "Sources: An armed faction was behind the attack on a police station near the Saudi border .. What is the reason?" 4/29/2921

NINA, "A Bus Carrying Members Of The PMF Comes Under Attack In Babylon," 4/10/21

- "Security media: A vehicle carrying missiles was found that was targeting Ain Al-Asad base," 4/8/21

- "Two members of the Popular Mobilization Forces were wounded north of Hilla," 4/6/21

- "Targeting an American base near Baghdad airport with Katyusha rockets," 4/22/21