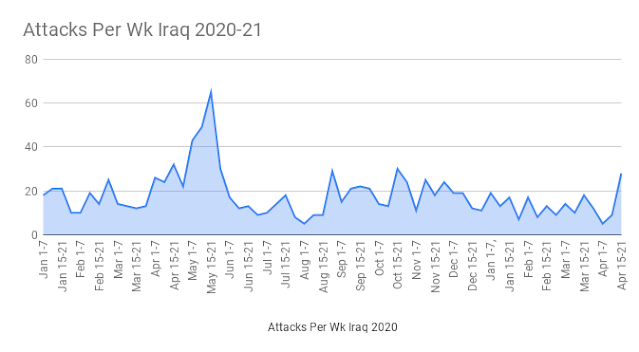 The Islamic State’s annual Ramadan/Spring offensive took off the third week of April. That was topped off by a car bomb in Baghdad a very rare event these days. Pro-Iran groups also continued their steady pace of attacks upon American targets. They also hit the Turks for the first time.

There were a total of 32 security incidents recorded in Iraq from April 15-21. That was the most since the third week of September 2020. Four were by pro-Iran groups and the other 28 by the Islamic State.

The increase in attacks led to a jump in casualties with 19 deaths and 44 wounded during the week. 1 Turkish soldier, 8 civilians and 10 members of the Iraqi Security Forces (ISF) were killed and another 3 Hashd al-Shaabi, 13 ISF, and 28 civilians were injured. Baghdad had the most casualties with 27 as a result of the vehicle bomb. 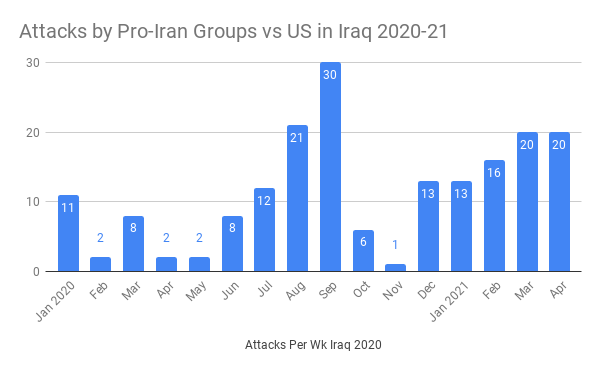 4 incidents were by factions working with Iran. Two convoys carrying supplies for the U.S. were bombed in Anbar and Dhi Qar. Rockets were also fired at the Balad Air Base in Salahaddin that houses American contractors that wounded five including three Iraqi soldiers. A Turkish army base in Dohuk was also hit by rocket fire which killed a Turkish soldier and wounded an Iraqi civilian. The missiles were believed to have been fired from Ninewa in an area controlled by the Hashd. This was the first time these factions attacked the Turks. They had been complaining about Istanbul’s occupation of northern Iraq since it has had several bases in Kurdistan since the 1990s aimed at fighting the PKK. In total there have been 20 incidents by these groups so far in April the same as all of March.

In Anbar a car bomb was discovered and dismantled in Rutba which is in the West towards Jordan. It was likely meant to be shipped somewhere else in the country. An army base was also hit by mortars in the Hit district in the eastern part of the province by Ramadi. The governorate rarely has attacks because it’s mostly used to bring in men and material from Syria. The attack on the army camp therefore was unusual and a sign that the insurgents were carrying out more sophisticated attacks during their Ramadan offensive.

That offensive was kicked off by a car bomb in Sadr City that left 5 dead and 21 wounded at the start of the week. The last such bombing was on September 1, 2020 in Ramadi. The last vehicle bomb in the capitol was on October 4, 2017. On top of that IS hasn’t carried out an attack within the city proper for months now all making this a very rare event. In addition a police colonel was gunned down in the west.

There were seven incidents in Diyala during the week. There was one gun battle that left a soldier wounded, three villages were assaulted that included the burning of homes and another hit by mortars. Two army patrols were struck by IEDs leaving a total of 2 soldiers dead and 5 wounded. Some electrical transformers and generators were also destroyed by the militants. One incident occurred in Azim in the north, one in Muqdadiya district in the center and the rest in Khanaqin in the northeast. The latter is the main base for the Islamic State in Iraq.

There was an IED, a sheikh was kidnapped, two oil wells at the Bai Hassan field in Kirkuk were bombed and there was a large confrontation between insurgents and the army that left 1 soldier dead and 2 civilians and 2 soldiers injured that started with IS firing mortars upon an army position followed by gunfire. Most of these attacks occurred in the south where IS was never expelled during the war. This province had seen one of the largest drops in violence since October but IS was back this week.

IS also went after infrastructure in Ninewa where two electricity towers were blown up that also wounded two. A Hashd checkpoint was hit by RPGs and there was a bombing. Like Anbar this governorate rarely sees violence because it’s mostly a logistics hub.

Finally, Salahaddin saw the most incidents during the week with 9. That included two home invasions, three IEDs one of which killed a town’s mukhtar, and four confrontations with the security forces. This was a change because Diyala regularly sees the most incidents and Salahaddin had been rather quiet since October.

Finally, the insurgents fired some rockets at the Kifri area of southern Sulaymaniya. This is another unusual event since the province hadn’t been struck since the second week of January. It was another sign that IS is picking up its operations during its new campaign.

Iraq Newspaper, "The terrorists ISIS announces in a statement the burning of 40 generators and electrical transformers in the village of Al-Hitawein in Azim Diyala," 4/21/21

- "A Convoy Of Logistical Support For The Int'l Coalition Targeted With An IED In Dhi Qar," 4/17/21

- "The death of a child in the explosion of a bomb of ISIS remnants northwest of Kirkuk," 4/21/21

- "Four soldiers were killed and wounded when an explosive device exploded in Diyala," 4/21/21

- "ISIS attacks an agricultural village in the countryside of Jalawla, in Diyala Governorate," 4/21/21

Shafaaq News, "ISIS storms the home of a security associate and executes him south of Samarra," 4/19/21

- "Mukhtar was killed in an explosion inside his home in Salahaddin," 4/18/21