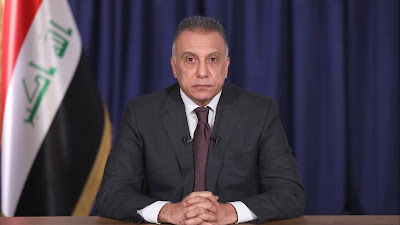 (Hawar News Agency)
Iraq’s Prime Minister Mustafa al-Kazemi continues to declare that reforms he has not enacted are reversing the country’s economic woes. On April 12 he claimed that the nation’s foreign reserves were up by $8 billion due to steps taken against corruption and the Central Bank of Iraq dollar auctions. The month before Kazemi said that the economic collapse was over due to the government’s White Paper that suggested a number of changes. The fact that the White Paper was never implemented, there were no changes to the auctions, and corruption is as bad as ever put a lie to the premier’s comments.

Recent articles highlighted that little has changed. On March 24 Al Mada reported that twelve influential figures accused of assassinations and currency smuggling were not arrested because the Shiite parties got Kazemi to hold off on corruption cases before this year’s election fearing clashes with the authorities. Likewise on February 25 there was an article in Al Maalomah that parliament’s integrity committee found 90% of the money smuggled out of Iraq was done by politicians and government officials. Iraq remains one of the most corrupt countries in the world because there is no commitment by the elite to tackle the issue. The ruling parties use graft, etc. to not only enrich themselves but to pay off their friends and followers to maintain their power. Kazemi has done nothing to change this situation.

Finally, in March parliament passed the 2021 budget. It is the largest in history and has a record deficit as well. That’s because there is no real economic reform included in the document and instead greatly increases spending all of which are in exact contradiction to the White Paper which Kazemi touted. Instead oil prices have increased which is the government’s main source of revenue. When the energy market rises so does the budget and the reserves. Again, it’s not the White Paper which the government largely ignored but petroleum that accounts for the increased dollars.

Iraq has only carried out economic reform once in its history which was after the 1958 coup. Instead, the ruling class only talks about change which is what PM Kazemi has been doing the last few weeks. Like fighting corruption that’s because the ruling parties are not interested in change because they benefit from the status quo.

AIN, “Al-Kazemi: We succeeded in stopping the collapse of the country, economically and financially,” 3/2/21

Al Mada, “Influential Shiite blocs request that the Anti-Corruption Committee be restricted after it was close to arresting prominent leaders in the factions,” 3/24/21