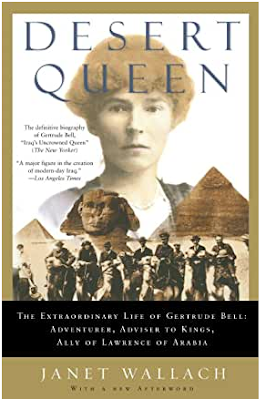 Desert Queen is one of the better biographies of Gertrude Bell. The author Janet Wallach had a real literary flair to her writing so it doesn’t read like your typical story of a historical figure. The book emphasizes three main aspects which the author believed shaped Bell’s life. Those were love of her family especially her father, her love of men which was always frustrated, and her of Iraq which she helped create after World War I.

Family always came first for Bell. Her father was a rich industrialist in northern England who she was enamored with. She constantly wrote to him throughout her entire life. He was also an intellectual who was interested in the world, science, politics, and education. That opened up a unique opportunity for her. Rather than being tutored at home and then shown off to be married she was sent to school at a young age and then to Oxford where she was the first women to get a History degree from the university. Bell was always grateful for what her dad did for her and how he was always supportive. Wallach drives this home by constantly referring to the correspondence between the two where she spilled out her life to him.

Another issue Wallach touched on was how Bell was always unlucky with men. Her dad thought the first man she was interested in was below her social status. The next one was not only married but died in World War I. Bell was also snobby and looked down on many people for not being her intellectual equal which made her difficult to get along with, and unattractive to many for being a woman with a brain and an opinion. Again the author relies upon Bell’s letters to explain her love life as she constantly wrote about her yearning and frustrations with the opposite sex.

The second half of the book focuses upon Bell working for the British government during World War I which eventually led to the creation of Iraq. Wallach presents a different take on Bell’s opinion about that country from most historians. The conventional wisdom is that she and T.E. Lawrence “of Arabia” were the only British officials who pushed for self-government in Iraq against the dominant opinion that the new nation should be directly ruled as a colony. In fact, that was Bell’s original view as well as she didn’t believe Arabs were capable of running their own affairs. It wasn’t until after World War I that she changed her mind and advocated for an Arab government but under British tutelage in Iraq. That would become official policy and allowed her to help push Faisal Hussein to be the first king of the country as well. Desert Queen goes into great detail about all the micro-managing Bell did to help the fledging nation. Wallach also adds a lot of nuance to the development of Bell’s ideas.

Desert Queen is a joy to read because of Wallach’s writing style. It covers all aspects of Gertrude Bell’s life not just her political career which made her famous. It’s by far one of the best biographies about her. It also goes into more detail about her vision for Iraq than many histories as well.

I have this book and I don't trust it on facts because, for example, Bell apparently travelled to North Wales by catching a train from "Victoria Cross Station" in London.

1) the Victoria Cross is the highest British decoration for battlefield heroism.
2) there is no railway station called that.
3) there's one called Victoria.
4) there's one called Charing Cross and another called King's Cross.
5) trains have never left any of them to go to North Wales; that would be either Paddington or Euston.
6) so what else in the book is this grossly wrong?
7) and is Wallach just such a big shot that the publisher didn't bother editing?

Books don't have editors that check for content. It's just spelling, grammar, etc. On the other hand I'm not tripping about a station name.