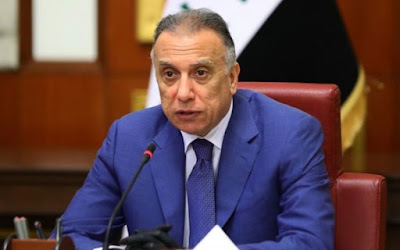 (Shia News Association)
Al Mada reported that Prime Minister Mustafa Kazemi wants to end the displacement (IDP) crisis in Iraq before the October elections. Starting in the fall of 2020 he ordered the closing of all IDP camps in the country forcing people out. That plan has now run into serious problems.

The first is that there are populations that can’t go back to their homes no matter what. For instance, there is a camp Anbar and another in Ninewa that mostly contain families associated with the Islamic State that fear that they will be attacked and killed if they returned. The authorities tried to close down the camp in Anbar but the residents refused to leave. There is a third camp in Anbar that houses 3,000 families from Jurf al-Sakhr in northern Babil that were expelled by the Hashd and not let back because the area has been turned into a large Kataib Hezbollah base. The government always knew about these people but ignored their plight. Now they can’t because they are interfering with Kazemi’s plans.

Second, the Displacement Ministry announced in March that the new 2021 budget has cut its funding. The Undersecretary of Displacement said that means it doesn’t have the funds to provide aid to displaced families that return. Even before that aid groups were saying that IDPs never received any money from Baghdad. The ministry has also claimed that it was running a vast program of reconstruction projects, aid for female headed households and services. Yet IDPs have told the International Organization for Migration the paramount group working on displacement that the main reason they do not return is the lack of jobs, services, and their homes are destroyed. The reality is the government has no rebuilding effort.

Last, most of the remaining IDP camps are in Kurdistan but the regional government is refusing to follow Baghdad’s orders to close them. The Kurdistan Interior Ministry said there needed to be a comprehensive security strategy before people could go home. Again, security is another issue that the central government has not followed through with. For instance there are Hashd units and tribes that have refused to allow people back plus many rural areas of Diyala, Kirkuk and Salahaddin are still threatened by the Islamic State.

Kazemi like his predecessors in the office wants to end the displacement crisis without seriously addressing the problem. He closed camps and forced people out. He promised a comprehensive plan to assist the IDPs but many of their needs are not being met. Instead it appears he just wants to shutter the camps and and claim success.

Al Mada, “The plan to evacuate ISIS families’ camps fails, and the authorities are keeping track of the Jurf al-Sakhr IDPs,” 4/21/21