Review Airpower in the War Against ISIS 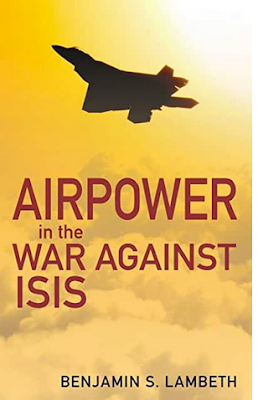 Airpower in the War Against ISIS by Benjamin Lambeth is an uneven book. Its strength is its argument against how the Obama administration conducted its war against the Islamic State. Lambeth believes the White House and the military misconstrued the threat the Islamic State posed, was reluctant to use its power to destroy it, and thus created the wrong strategy. The author believes that dragged out the war longer than it should have. The issues start with Lambeth getting lost in the weeds repeating the same points over and over about what went wrong. He also had problems with his sources, his analysis of Iraq, and never considered the effects of the air campaign he advocated for. It’s still worth reading but has its limits.

The most convincing part of the book is its critique of how the Obama administration conducted Operation Inherent Resolve against the Islamic State (IS). First, the White House didn’t take the threat seriously with the president claiming the group was like a jayvee basketball team. When Obama authorized airstrikes against the group it had no strategy to defeat it. The U.S. was simply reacting to events on the ground. When a plan was finally created it mistook IS as an insurgency rather than the quasi state it had become. The U.S. army was also put in charge of the campaign which focused upon supporting the Iraqi forces with the air force providing tactical strikes. The administration ordered no civilian casualties and micromanaged airstrikes meaning very few were actually made for the first two years. There were only an average of seven airstrikes per day during the first five weeks. By the next year that had only grown to 20 strikes per day. The result was that its leadership, one of its main sources of funding oil, its transportation, etc. were all untouched for a long period of time. Lambeth believes this was an ineffective plan that dragged out the war longer than it should have. The book has plenty of quotes from generals and Air Force pilots involved in the campaign as well as military analysts who level these criticisms. Even administration officials admitted they had no real strategy initially.

The problems with Airpower in the War Against ISIS are many. The first was that Lambeth repeated the same points over and over. For instance he starts with what went wrong with the war, then the second to last chapter goes over all those points again, and then they are repeated a third time in the conclusion. There are also problems with the sources Lambeth used. He quotes people that were not Islamic State or Iraq experts which leads to bad claims like the Islamic State was defeated in 2009. By 2010 violence was picking back up in the country. Lambeth writes that Obama supported Prime Minister Nouri al-Maliki after the 2010 election to allow for America to withdraw from Iraq which is also wrong. The White House backed Maliki because it didn’t see any alternative to him. The author also quotes Wall Street Journal editorials many times for critiques of the Obama administration. The paper has a very conservative editorial board so repeatedly using it gives the book a partisan tint. Not only that but editorials are not based upon research, scholarship or reporting they are opinion pieces and not something usually used in a military history. Finally, the author ignores the consequences of the type of air campaign he advocated for. He brings up the Gulf War as an instance of large scale precision airstrikes that crippled an enemy. He never mentions that the U.S. led coalition went after Iraq’s infrastructure like power plants which according to a U.N. report put the country back into the “pre-industrial age”. Likewise he commends the Trump administration for finally getting rid of the Obama administration’s restrictions and greatly increasing bombings. One result was the total destruction of West Mosul which is still in ruins to this day. Targeting Islamic State leaders, forces, oil tankers, etc. should have all been done at the start. Destroying cities in place like Iraq and Syria however that have neither the will nor resources to rebuild them is another.

If Lambeth had an editor that went over content his book would be much better. He makes a sound point that President Obama did not have a real plan to take on the Islamic State initially and the one his administration finally formulated was too restrictive. Lambeth’s problems are he repeats the same points over and over and he used some questionable sources which distracted from his main point. He also focused solely on the destruction of the enemy and not on the impact that would have upon Iraq and Syria. His faults end up outweighing his argument.