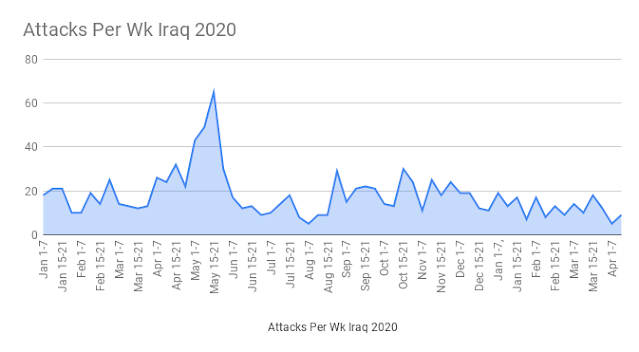 The Islamic State continued to operate at a low level during the second week of April while pro-Iran groups maintained a steady pace of operations against American targets in Iraq.

There were a total of 15 security incidents reported from April 8-14. 6 of those were by pro-Tehran factions and 9 by the Islamic State. 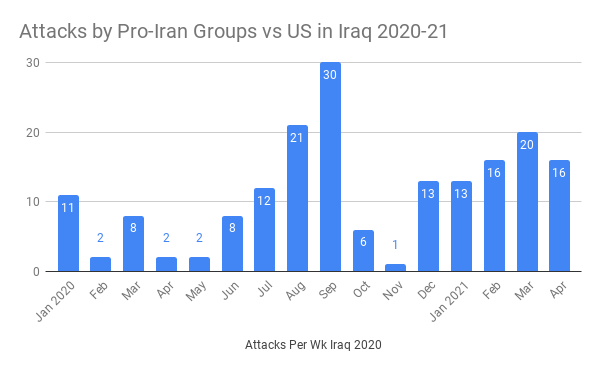 Convoys carrying supplies for the U.S. were hit by IEDs in Babil twice, Dhi Qar, Muthanna, and Salahaddin. Rockets were also found outside the Ain Al-Asad base in Anbar and a drone fired missiles at the Irbil airport. There have been a total of 16 attacks by factions aligned with Iran in April. They have been picking up their targeting of the Americans since December.

There were nine incidents by the Islamic State. Those took place in Anbar (1), Babil (1), Baghdad (2), Diyala (2), Ninewa (1), and Salahaddin (2). They led to 6 deaths and 18 wounded. 3 members of the Iraqi Security Forces (ISF) and 3 civilians were killed along with 8 civilians and 10 ISF being injured.

2 people were killed by an IED in the Fallujah district. Anbar has very few attacks because the insurgency mostly uses it to bring in men and material from Syria.

A bus was shot at in Babil carrying members of the Hashd but there were no casualties. IS routinely attacks Hashd targets in the province about once a week.

There were two incidents in Baghdad. A checkpoint was shot at wounding two soldiers and an IED killed a person. The shooting took place in Tarmiya in the north and the bombing was in Besmaya in the southeast. These outer regions of the capital province are usually where attacks take place.

There were two IEDs in Diyala. One was in the Hamrin Basin during a security sweep there that left three soldiers dead and two wounded. The other was in the Abu Saida sub-district in the center of the province.

There was another IED in southern Ninewa that left three wounded. The governorate is another logistics hub that rarely sees violence.

A bomb went off in Amerli in Salahaddin that wounded 5. There were no incidents in Kirkuk. These two areas have seen the greatest drop off in attacks since November when incidents declined across Iraq. Overall, IS remains largely dormant in the country carrying out operations only in the teens to single digits.

Al Hurra, "Two workers were killed when a bomb of ISIS remnants exploded in Fallujah, Iraq," 4/11/21

- "Five farmers were injured when an explosive device exploded east of Salah Al-Din," 4/8/21

- "Security media: A vehicle carrying missiles was found that was targeting Ain Al-Asad base," 4/8/21

- "An explosion targets an international coalition convoy in southern Iraq," 4/14/21

- "A new explosion targets an international coalition convoy near Babil," 4/8/21

- "Two wounded, one of them an officer, in an attack on an army post and a massive fire devoured a popular market in Baghdad," 4/9/21

Al Sumaria, "A person was killed when an explosive device exploded southeast of Baghdad," 4/10/21