Review A Pretext for War, 9/11, Iraq, and the Abuse of America’s Intelligence Agencies 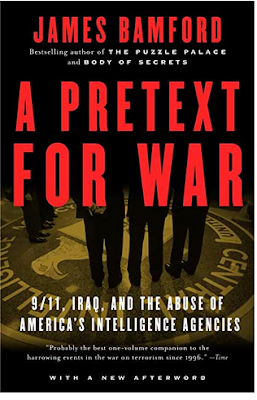 A Pretext for War, 9/11, Iraq and the Abuse of America’s Intelligence Agencies by James Bamford is a very flawed book. The first problem is the author loves telling stories which takes him off on extended tangents. Second, the last third of the book covers the causes and lead up to the Iraq War and is completely wrong blaming Saddam’s attempt on the life former President George Bush and neoconservatives for the invasion. The best part is its coverage of 9/11 but that can be read in other books that don’t have so many issues.

The first few chapters of A Pretext for War cover the events of 9/11 from several American perspectives. There’s air traffic controllers, people inside the World Trade Center, Air Force pilots, journalists and more. It’s a tale of total chaos as the various government agencies had no idea what was happening initially and when one organization found out it took a long time to boil up to the top. The accounts of people inside the twin towers are harrowing and heartbreaking. They present the trauma of the terrorist attack. After this great start however the book just digs itself into one hole after another which makes it largely something to avoid rather than enjoy.

Bamford’s ability to tell stories goes from an asset to a liability in the rest of A Pretext for War. He can’t help but go into long winded explanations of various people and organizations. He wrote a whole book about the National Security Agency (NSA) so he decides to give an entire history of the group that goes from its origins to its success in the Cold War to its problems with adjusting to its aftermath. Rather than describing how that complicated the war on terror after 9/11 or intelligence on Iraq that’s saved for later pointing to another shortcoming. His stories are often not connected to his larger point about confronting Al Qaeda and the invasion of Iraq or they are related much further along in the book. Another time he gives an extended biography of CIA Director George Tenet where he divulges important details such as the fact that Tenet once lobbied for Greek-American businesses. How does that relate to the point of the book? It doesn’t but Bamford includes that and more because he just can’t seem to help himself. This constitutes much of the middle third of the book and often gets very annoying because there’s no payoff after reading the stories.

The last third of the book is on the run up to the Iraq War and gets almost all its facts wrong. The author starts off by claiming that President Bush hated Saddam Hussein because he tried to assassinate his father in 1993. The president’s motivations for the invasion are hotly debated but this is just a bad assumption. Next Bamford believes that a small group of neoconservatives within the administration successfully pushed their anti-Iraq agenda. He singles out Richard Perle who was head of the Defense Policy Board, Douglas Feith who was Undersecretary of Defense for Policy and David Wurmser who worked for Vice President Dick Cheney. None of these officials had senior positions and more importantly none of them had regular access to the president. Secretary of Defense Donald Rumsfeld was a much more influential figure who also wanted to get rid of Saddam Hussein but actively opposed some of the neoconservatives core beliefs such as transforming the Middle East through invading Iraq. Ultimately Bush decided on the war on his own and actually rejected the push by neoconservative Deputy Defense Secretary Paul Wolfowitz to put Iraq at the center of the war on terror immediately after 9/11. The author has several other problems with the pre-invasion events as well, but these two are the most glaring.

In the end, A Pretext for War is not worth the time to read. James Bamford goes off on too many seemingly pointless stories that add nothing to the overall theme. His interpretation of what caused the Iraq War is wrong and so are many of facts surrounding the events that led to it. These plethora of faults mean you can gain little from the book.