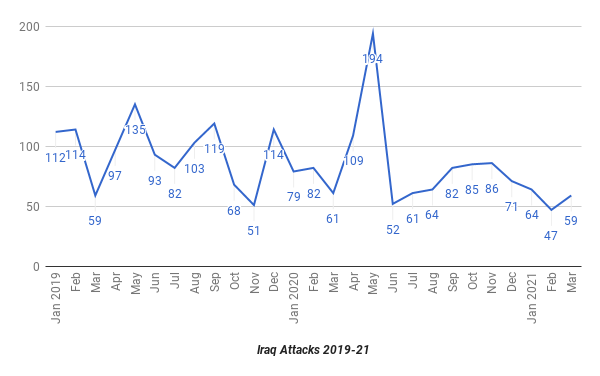 Attacks by both the Islamic State and pro-Iran groups picked up in March 2021. There were a total of 79 incidents. 59 were by the insurgency, up from 47 in February. IS incidents have been declining since November. This was the first time they’d gone up in four months. There were also 20 incidents by factions aligned with Iran the most since September 2020. 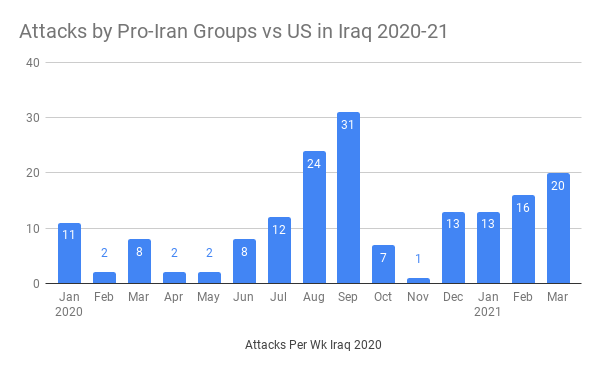 In November 2020 pro-Iran groups announced a ceasefire and there was only one incident that month. That ended in December as the anniversary of the deaths of Iranian Revolutionary Guards Quds Force commander General Qasim Suleimani and Hashd leader Abu Muhandis approached resulting in 13 incidents, another 13 in January, 16 in February and 20 in March. In that last month there were rocket attacks upon air bases in Anbar and Salahaddin, there were 17 IEDs upon convoys carrying supplies for the U.S. and a bomb was also dismantled along a highway used by these trucks in Diwaniya. The bombings have expanded out to Anbar and Salahaddin showing that the pro-Iran factions can hit U.S. targets anywhere in the country. These attacks are meant to oppose the U.S. presence in Iraq. Al Mada also reported that these groups may be trying to pressure the shipping companies to hire them as security. They have carried out similar extortion rackets.

The 59 IS incidents took place across Babil (1), Anbar (3), Ninewa (5), Baghdad (8), Kirkuk (10), Salahaddin (11), Diyala (21). They caused 39 deaths and 44 wounded. 9 Hashd al-Shaabi, 14 members of the Iraqi Security Forces (ISF), and 16 civilians lost their lives. Another 8 Hashd, 14 civilians and 22 ISF were injured. In the spring the militants announced a war of attrition against the security forces. That’s the reason why 53 of the 83 casualties in March were from the government’s forces. 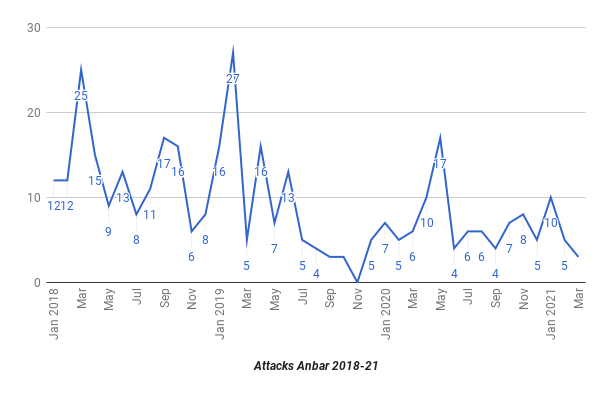 Anbar was the only province that saw a decline in incidents in March. There were 5 in February vs 3 in March. The governorate is mostly used for logistics by IS which accounts for the low number of attacks. 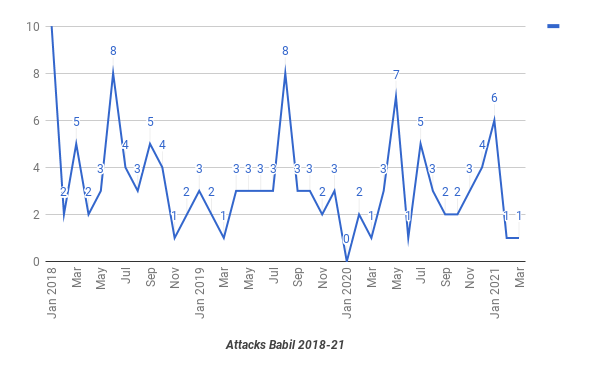 Babil had more attacks by pro-Iran groups than the insurgency. There was only 1 incident by the latter when a Hashd commander was killed at the start of the month. (1) Officers have been a main target of IS’s war of attrition. 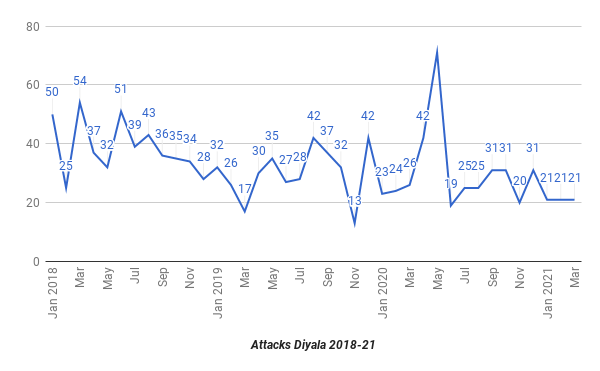 Violence has remained stable in Diayla, the Islamic State’s main base in Iraq. There have been 21 incidents from January to March. There was one gun battle, one attack upon a checkpoint, 2 electricity towers were blown up, and four people were kidnapped. Most of these attacks occurred in Muqdadiya in the center and Khanaqin in the northeast where IS has de facto control of many rural areas. 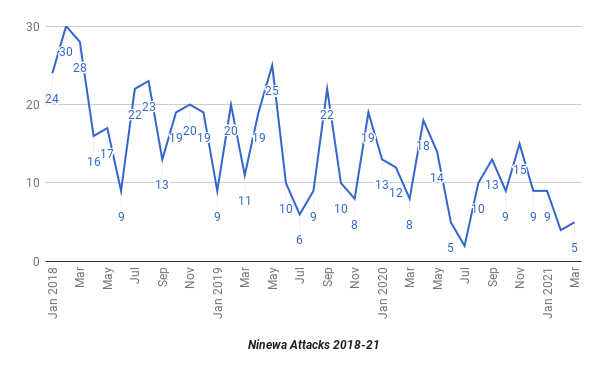 The same was true in Ninewa where there were 4 incidents in February and 5 in March. Like Anbar, this governorate is also mostly used to move in men and material from Syria into Iraq and therefore is no longer a major target for IS.

Baghdad, Kirkuk and Salahaddin all saw increases in incidents. In the capital province there were 5 attacks in February up to 8 in March. That included one gun fight, a motorcycle bomb, and a sheikh’s house that was bombed. Tarmiya a town in the north has been a prime target as it still has an IS cell operating there. In Kirkuk incidents went from 8 in February to 10 in March including two gun battles and two checkpoints shot at. All of these happened in the south where IS was never expelled. This is the second most important area for the insurgency. Finally, in Salahaddin attacks went from 3 in February to 11 in March. Insurgents attacked an army camp, invaded a home dressed as ISF and executed 7 people and killed a policeman as well, and three men were kidnapped. A Hashd commander was also killed in a gun fight. Kirkuk and Salahaddin have seen the biggest drop off in violence since November 2020 when attacks across the country began a steady decline. It’s yet to be seen whether March’s increase in violence is just part of the ebb and flow of attacks or whether IS is becoming more active.

1. Kohlmann, Evan, "Iraqi Shiite militia Kataib Hezbollah has announced the "martyrdom" of 3 of its fighters in clashes with ISIS militants in the Jurf al-Sakhar area south of Baghdad, the site of repeated fighting between KH and ISIS. Casualties included " Twitter, 3/10/21

Azzaman, "Losses to the crowd and Federal Police in an ISIS attack near Kirkuk," 3/18/21

Kohlmann, Evan, "Iraqi Shiite militia Kataib Hezbollah has announced the "martyrdom" of 3 of its fighters in clashes with ISIS militants in the Jurf al-Sakhar area south of Baghdad, the site of repeated fighting between KH and ISIS. Casualties included " Twitter, 3/10/21

- "One Iraqi Soldier Killed, Another Wounded In Armed Attack In Kirkuk's Daquq," 3/12/21

- "A tribal leader survived an assassination attempt north of Baghdad," 3/27/21

Al Sumaria, "Dismantling an explosive device prepared to target a convoy on the Diwaniya-Babil road," 3/31/21