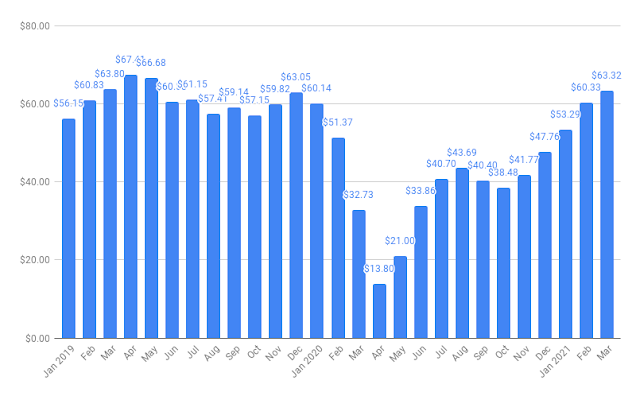 Iraq’s oil exports dipped slightly in March 2021, but prices continued to rise which meant revenues were up for the fifth month. This is important for the most petroleum dependent country in the world whose economy rises and falls with the energy market.

In March, Iraq averaged 2.945 million barrels a day in petroleum exports. This was slightly down from February’s 2.96 million. This was despite the Oil Ministry boosting its production in February by around 100,000 barrels a day according to Iraq Oil Report.

That didn’t matter as oil prices went up again. In March a barrel of Iraqi crude went for $63.32 compared to $60.33 in February, and $53.29 in January. In fact, this was the fifth month of increases. Likewise revenues went from $4.765 billion in January to $5.013 billion in February, and $5.782 billion in March. This is good news for Baghdad that just passed the largest budget in its history. It likewise has a massive projected deficit. The nation needs to average $60 per barrel for its oil for the duration of 2021 to pay for this massive amount of spending. The idea of fiscal responsibility and economic reform has gone out the window with the recovery in the energy market. This has been the pattern since Iraq regained its sovereignty in 2005. When oil prices are up the elite greatly expands the already bloated state to maintain its patronage networks and steal money. When petroleum goes down the country goes into a meltdown until the trend reverses itself.