The first week of April was a first. That was because there were more attacks by pro-Iran groups in Iraq than by the Islamic State. There were a total of 16 security incidents reported with 11 by factions connected to Tehran. The insurgency on the other hand continues to sputter since the winter with just five attacks. 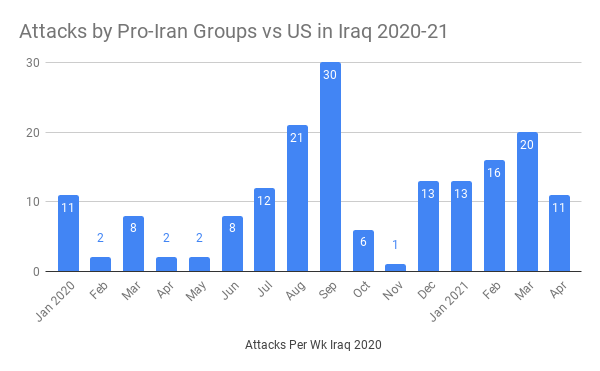 Pro-Tehran groups continued to attack convoys carrying supplies for the U.S. Ten of their eleven attacks were aimed at these targets across Anbar, three in Babil, two in Baghdad, two in Diwaniya, and one in Salahaddin. The Balad Air Base in Salahaddin which houses Americans was also hit by rockets. Originally almost all of these attacks were in the south but now these factions are spreading out to places like Anbar and Salahaddin to show that they can hit the U.S. anywhere in the country.

Those attacks left 3 dead and 5 wounded. 3 civilians lost their lives, 2 Hashd al-Shaabi were injured along with 3 civilians.

In Babil 2 Hashd were wounded by an IED in Jurf al-Sakhr. This district in the northeast is a major Kataib Hezbollah base which is routinely targeted by IS.

There was a shootout with the security forces and an IED in Diyala that left two injured. The first occurred in Khanaqin and the second in Muqdadiya. These are the two main areas the militants operate in. They have de facto control of many rural areas in those two districts.

There was a kidnapping in the Rashad district of southern Kirkuk. These have been happening lately. Usually it’s to extort money out of people.

One person was killed and another was wounded by a roadside bomb in Hamam al-Alil south of Mosul. There are few attacks in Ninewa as it is mostly used for logistics.

There was another kidnapping in the Tuz Kharmato district in eastern Salahaddin. Four men were taken with two of their bodies later found. There was a gun battle as well in between insurgents and tribal fighters in Tikrit. This is a rare event because IS is almost exclusively rural. They hardly ever venture into urban areas these days.

NINA, "A convoy of logistical support to the International Coalition forces targeted south of Baghdad," 4/5/21

- "A Convoy Of Logistical Support For The Int'l Coalition Forces Targeted In Diwaniyah," 4/4/21

- "A Convoy Of Logistical Support For The Int'l Coalition Targeted With An IED explosive device Near Babylon," 4/7/21

- "The PMF Announces ISIS Losses After Thwarting Its Exposure North Of Khanaqin," 4/2/21

- "Two civilians were wounded by an ISIS explosive device in Diyala," 4/7/21

- "Two members of the Popular Mobilization Forces were wounded north of Hilla," 4/6/21

Shafaaq News, "The fourth of its kind within hours … an explosion targets a convoy of support for the international coalition in Iraq," 4/7/21