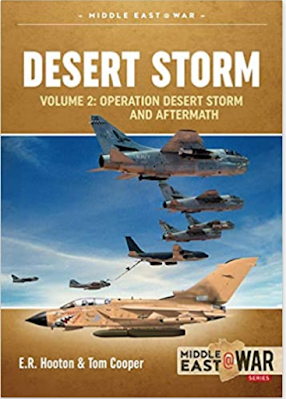 Desert Storm, Volume 2: Operation Desert Storm and the Coalition Liberation of Kuwait 1991 by E.R. Hooton and Tom Cooper completes the series on Iraq’s invasion and expulsion from Kuwait. Like the first volume the book can get lost in the weeds and needs more maps but provides some good insights into the war that are not often talked about.

The problems with Volume 2 stand out immediately. The first is there are just too many details. Just like Volume 1 Hooton and Cooper go over every piece of U.S. and Coalition equipment that landed in Saudi Arabia such as x amount of this plane and that landed on this date. Then there are all the military abbreviations. There’s a glossary at the start but it takes constant flipping back and forth to be useful. Finally, there needed to be more maps. There are some general ones about the alignment of forces and the direction of the Coalition attack during the invasion but then in the text there are all kinds of locations that are not noted. The book would have been better if they could have detailed those to tell exactly where they’re talking about. There were all apparent in the first book in the series. These are minor annoyances however and don’t distract from the overall text.

The book is divided into three broad sections. The first is the air campaign launched by the Coalition. The second is the planning for the Gulf War and finally the ground campaign to liberate Kuwait. Like most military histories there is a lot of details but it only covers the major units and there’s no blow by blow commentary about major engagements. Along the way there are several insightful observations about problems with the war which are actually the best part of Desert Storm, Volume 2. For example the U.S. Air Force was focused upon destroying Iraq’s air defense, command and control and infrastructure like power plants and bridges more than taking out the Iraqi ground forces. The U.S. Army and General Norman Schwarzkopf constantly told the Air Force to revise its plans to commit more resources to hitting Iraq’s army. Another time the authors note that Schwarzkopf was not that good of a general. He was not a strategist or tactician and only gave general ideas about what he wanted and left it to his subordinates to come up with the details and often got angry that they didn’t do what he wanted. He also micromanaged the war and scared some of his subordinates with his temper. When the war started the U.S. got intelligence that the Iraqis were breaking and retreating back into their country. Schwarzkopf then demanded changes in the orders to his units which made an already over complicated attack plan even worse. He was also disconnected from some of his commanders looking at maps and unaware of the circumstances on the ground. This stands in stark contrast to the war hero image Schwarzkopf received in the press afterward. Last, Hooton and Cooper discuss how incompetent Saddam was as a leader. He gave confusing orders and his command to have his forces withdraw from Kuwait contributed to a route. These points about the overall war were the best parts of the book. It showed some analysis  in the midst of all the details.

The strengths of Desert Storm 2 outweigh its shortcomings. It provides a lot of points about the planning for the Gulf War and problems the Coalition and Iraqis ran into during actual combat. Some of the later provide interesting insights. That being said the book would be difficult to read for a lay person unfamiliar with military history.