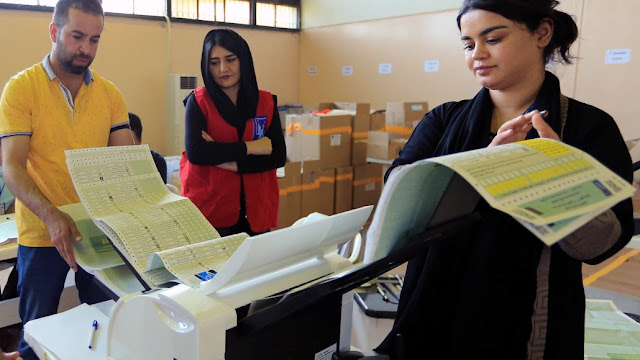 Iraq’s political parties are gearing up for the October 2021 elections. That’s seen by a slew of announcements of new coalitions recently.

A former Patriotic Union of Kurdistan (PUK) member told Al Mada that the Kurds will run on 4-5 lists this year. A Kurdistan Democratic Party (KDP) official said that it will run on its own in Baghdad, Ninewa, Anbar, Wasit, Karbala, Sulaymaniya, Irbil and Dohuk. In Sulaymaniya which is a PUK stronghold the party will run mostly women hoping to exploit the women’s quota for seats in parliament. New Generation will also go it alone and will compete in the three Kurdish provinces and Kirkuk. The PUK and Change however made an alliance. Change originally broke away from the PUK as an opposition party protesting against the status quo. In recent years it has tried to move into the mainstream and this is the latest example. Finally, the KDP, PUK and the Kurdistan Socialist Democratic Party will host one list in Diyala in the Khanaqin district a Kurdish area. The KDP and PUK still dominate Kurdish politics and used to have a power sharing agreement. That has fallen apart in recent years with the KDP emerging as the dominant force. That’s the reason for the separate lists because it feels it can dominate elections on its own.

The same fracturing of the Shiite forces has occurred. Iran’s Foreign Minister Jawad Zarif was pushing for the Shiites to unite but that failed. Fatah made up of pro-Iran groups like Badr and Asaib Ahl Al-Haq announced it would run on its own. Muqtada al-Sadr has not announced any deals with others either. Ammar Hakim’s Hikma however will run with former prime minister Haidar Abadi’s Nasr. It’s expected that Fatah and Sadr with their popular bases and ability to get out voters will win the most seats in parliament this year. Because of the divisions however amongst these leaders forming a ruling coalition will likely be a drawn out affair as it has always been with parties jockeying for positions and ministries.

Finally, there will be four major Sunnis lists this year. Speaker of Parliament Mohammed al-Halbusi who is the leading Sunni figure will one coalition. He’s challenged by financier Khamis al-Khanjar, former speaker Salim al-Jabouri, Jamal Karbouli and his al-Hal, Mohammed Karbouli, and former Defense Minister Khalid al-Obeidi. Khanjar and Jamal Karbouli have been Halbusi’s greatest rivals but failed to make any real inroads against him. Former speaker Osama al-Nujafi and Jamal al-Dhari are also expected to field candidates. Halbusi is likely to garner the biggest vote tally. Sunni parties have always been split which has been to their great detriment. After the war with the Islamic State they lost even more standing as many of their home areas are now under the control of various Hashd factions and many have aligned with Shiite forces as very junior partners in an attempt to hold onto their patronage.

Iraq News Network, “Al-Fatah Alliance: We will enter the elections on our own,” 5/1/21

Al Mada, “Kurdish blocs enter elections with single lists and leave alliances to the nature of the results,” 4/28/21

- “Shiite forces turn the page on the National Alliance: Eyes Walker and Fatah over more than 118 electoral districts,” 4/29/21

- “Sunni forces make up their minds: 4 alliances are participating in the early elections,” 4/27/21