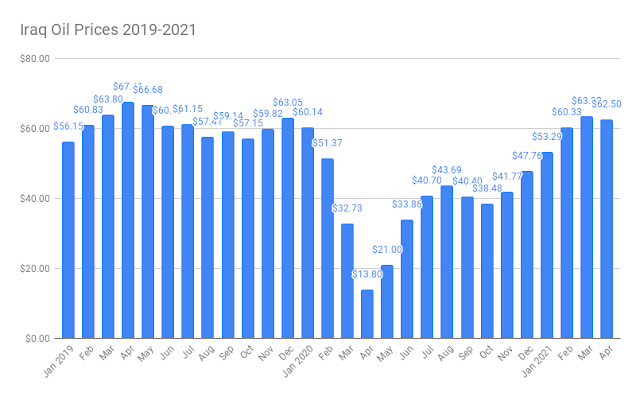 Oil prices and revenues declined slightly for Iraq in April 2021. Its crude was still selling for over $60 per barrel however which was most important in order to fund its budget.

Iraq exported an average of 2.947 million barrels a day in April which was just a tad bit above March’s 2.945 million barrels. 2.851 million barrels a day were shipped out of Basra with 95,447 barrels a day going through Turkey. April’s production figures were not released but it’s believed that Iraq was still violating its OPEC+ quota as it always has because it has been cash strapped since petroleum prices collapsed last year.

Despite the slight increase in exports revenues were down. Iraq earned $5.52 billion in April down from $5.782 billion in March. That was because the price of Iraqi crude went from $63.32 per barrel in March to $62.50 in April. Still, this was good news for Baghdad which needs at least $60 per barrel for all of 2021 to meet its budget obligations.