Review The Devil You Don’t Know, Going Back to Iraq

Al-Jezairy, Zuhair, The Devil You Don’t Know, Going Back to Iraq, Beirut: SAQI, 2009 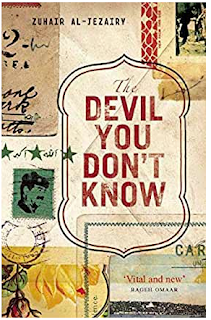 The Devil You Don’t Know, Going Back to Iraq contains the musings of Iraqi author and journalist Zuhair al-Jezairy on his country after he returned from exile in 2003. Zuhair left in 1969 because of the Baath Party. He went to Jordan but left there in 1970 due to the government’s crackdown upon the Palestine Liberation Organization on Black Sunday. He ended up in Lebanon that then exploded in civil war. During the Iran-Iraq War he returned to Iraq fighting with the Kurds against Saddam Hussein. He eventually settled in London until he decided to go back to Iraq after the U.S. invasion. He went on to help found two newspapers Al-Mada and Aswat al-Iraq. His book is full of insights into the dramatic changes that occurred in his homeland.

One example of Al-Jezairy’s writing was when he went looking for what he called “the beauty of Iraqi women.” When he was a young man there was a lively courting between the two sexes. Things began to change during the Iran-Iraq War when women were encouraged to stay home and  bear children to make up for the losses on the battlefront. Afterward Saddam co-opted Islam which led to a reversal of the personal status laws that helped women. Militias like the Fedayeen Saddam were also being formed at the time who intimidated women. The end result was that by 2003 most women wore Islamic dress that covered their bodies and were harassed at universities and high schools with men yelling at them that they should stay at home. This was one of many changes he lamented upon. Obviously his criticism was based upon a sense of nostalgia, but he also felt like there had been a major step backwards for Iraqi society from one that was liberal in the 1960s and 70s to one dominated by religion and conservatism. It was now a country where women could be physically attacked simply for not wearing the right kind of clothes and he objected to that saying women were being denied their humanity.

Another time Al-Jezairy talks about why he thought his country had become so violent. He believed that three generations of Iraqis grew up seeing violence as a form of protest and self-expression. Then during the 1990s sanctions reduced the middle class and created a generation of young people without a real education or opportunities. They grew up on the street and were more likely to commit crimes and violence. After 2003 violence became a way to show freedom in a country that had been without it for decades. Men and boys could now walk the streets with weapons and shoot and kill people often with very few consequences. This was how they showed their newfound power that came from a barrel of a gun. The author thought that this was an attack upon modernity as civil society and a sense of law and order and security disappeared. The fall of Saddam hadn’t created this new culture but unleashed what had been building up for decades.

Despite all the problems the author saw after his return he never gave up. He helped found and became the editor of Al Mada. He said that he pushed his staff to always ask about public opinion rather than simply reporting on the widespread violence so that issues would be presented as a war of words and ideas. He later created Aswat al-Iraq and tried to train a new generation of journalists to ask questions and do actual reporting on the issues rather than just repeating what the government said which he saw as very similar to what happened under the Baath. He felt that informing the public was one of the most important things in creating a new society and hoped that it would help break down the sectarianism that had taken over the country. He portrayed it as a constant battle to stay sane because there was so much death and destruction going on around him. It was a struggle not to be beaten down by events.

The Devil You Don’t Know is one of the best books by an Iraqi civilian about the events post-U.S. invasion. Zuhair al-Jezairy was always a thinker and writer so he could philosophize about things and go into much more depth than just writing a memoir about what he saw and felt. He provides plenty of memorable moments as a result. Not everything is negative either as his work in journalism showed. Despite all the chaos that consumed the country he still felt like he could make a difference; that the pen could be mightier than the sword in the end. That also meant he didn’t want Iraq to go back to like it was before he left. He actually wrote about how Iraqis were obsessed about the past which led them to ignore the future. He wanted to contribute to something new.