New Wave of Protests In Iraq Over Executions Of Activists 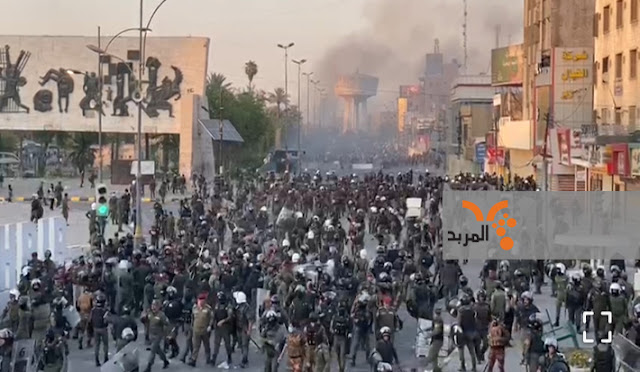 (Al Mirbad)
On May 25 thousands of Iraqis came out across eight provinces to protest the continued murder of activists. This was sparked by the assassination of Ihab Jawad al-Wazni a leader of the Karbala demonstrations on May 8. In Baghdad the riot police broke up the gathering and killed two.

The death of Wazni set off a new wave of protests and reflection by activists. The day after he was killed people came out in Diwaniya and Baghdad. In Karbala they set fire to the front of the Iranian consulate. State of Law’s offices were burned in Babil on May 10. Then on May 11 another activist Hussein Abdul Al-Waeli was killed in front of his house in Dhi Qar. There were more demonstrations in southern Iraq in the following days. There were also announcements that demonstrators along with the Iraqi Communist Party would boycott the 2021 election. There was a meeting in Karbala on May 16 on just that issue. Activists were split over whether to participate in the upcoming vote or not but they did decide to restart national demonstrations on May 25. A few days after that conference an activist in Dhi Qar was wounded by a stick bomb placed under his car. In 2019 when protests re-started in Iraq organizers, journalists and bloggers faced a constant series of threats, intimidation, and assassinations. Iraq’s Human Rights Commission noted 89 attempts on activists’ lives. Groups aligned with Iran in the Hashd were the main suspects of these attacks. They accused the demonstrations of being aligned with the United States and were angered by anti-Tehran slogans that were popular at demonstrations.

On May 25 there were marches in Baghdad, Dhi Qar, Babil, Karbala, Najaf, Maysan, Wasit and Basra. The riot police broke up the demonstration in the capital using tear gas and live bullets which led to the death of two people. Prime Minister Mustafa al-Kazemi has repeatedly said that he has banned the use of live ammunition against protests and yet shootings continue to happen. It appears the riot police are unresponsive to the country’s leadership about procedures.

It’s yet to be seen whether this will spark another summer of activism or not. Protests over political reforms have ended because of the repression. It will likely lead to very low voter turnout in October. Iraqis have become more and more cynical about the political system. That resulted in the lowest participation rate in the last vote. The lack of legitimacy for the government has only grown since then. That’s because the elite are unresponsive to the public despite Iraq being a democracy. Because they control the country’s oil wealth they believe voters should follow them because they give out jobs and services instead of the other way around. This has been the system since the 1930s and is unlikely to change anytime soon.

Al Aalem, “He crawled to Baghdad to prevent the elections .. What happened at the Karbala meeting?” 5/17/21

Buratha News, “Karbala demonstrators block all streets leading to the courtyard of education directorate to protest the assassination of Ihab al-Wazni,” 5/9/21

Al Hurra, “The assassination of activist Wazani … Anger in Iraq and the momentum for boycotting the elections,” 5/9/21

Iraq Newspaper, “The execution of the activist Hussein Abdul-Al Al-Waeli in front of his house in Al-Shuyoukh market in Dhi Qar,” 5/11/21

Al Mada, “The dead and wounded dispersed the demonstrations in Baghdad … and the center and south are escalating,” 5/25/21

Al Mirbad, “Diwaniya … Ramzi funeral of the activist Ihab al-Wazni … and demands for the protection of activists and demonstrators,” 5/9/21

NINA, “Dozens of demonstrators gather in Tahrir Square to condemn the assassination of Al-Wazni,” 5/9/21

Sotaliraq, “Basra demonstrators rally in front of the local government building: We will not leave until the demands are met,” 5/25/21

Al Sumaria, “A civilian activist was killed in armed attack in Karbala,” 5/8/21