Review Task Force Black, The Explosive True Story Of The SAS And The Secret War In Iraq

Urban, Mark, Task Force Black, The Explosive True Story Of The SAS And The Secret War In Iraq, London: Abacus, 2010 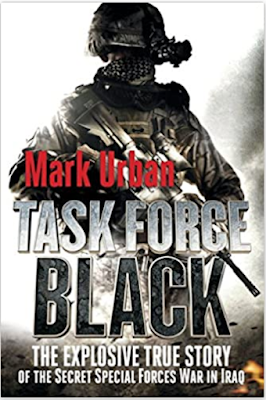 Task Force Black, The Explosive True Story Of The SAS And The Secret War In Iraq is a journalist’s account of the British Special Air Service (SAS) time in Iraq from 2003-09. It also documents London’s approach to the occupation of that country. The author Mark Urban argues that the SAS was the only successful part of England’s policy during the war.

Most of the book is about the operations the SAS and other special operatives carried out in Iraq but it also touches on how the British largely failed in Iraq. Urban believes large segments of the Foreign Office, military and the MI6 intelligence service were skeptical of the decision to invade Iraq and were upset with America’s handling of the occupation right from the start. London believed that it’s experience in Northern Ireland gave it a better perspective on how to occupy a country. The problem was the British allowed the Iraqi parties with militias to not only establish themselves in southern Iraq which was under British authority but turned to their armed wings. By 2004 they had taken over much of the south and the police as a result. By 2006 London wanted out of Iraq and announced that it would withdraw in 2008. Only one British commander ever thought the British could clear out the militias and failed because he didn’t have the backing of his government and Baghdad. That position impacted the SAS as well as it was tasked with hunting down former Baathists from 2003-04 because London didn’t want them working with the Americans. Urban repeatedly calls this a complete failure to secure the south. He calls the British occupation passive and sometimes indifferent. The Americans had largely the same view although they wouldn’t say it publicly.

Most of Task Force Black however is about the SAS when it was allowed to work with the Americans to hunt down insurgents and militias. That really started in 2005 and was thanks to the new SAS commander Richard Williams who was pro-American and believed that the SAS needed to get into the fight in Iraq. He had the SAS work with General Stanley McChrystal who was the head of the Joint Special Operations Command (JSOC). His approach was to carry out daily raids upon Al Qaeda in Iraq to collect intelligence on its networks and eliminate its leadership. This resulted in several victories such as the death of Abu Musab al-Zarqawi the head of Al Qaeda in Iraq. The SAS also helped take apart many of the group’s car bomb cells. It also arrested Qais Khazali who was the leader of Asaib Ahl Al-Haq a pro-Iran militia who was attacking American and British forces. Despite Urban’s high praise of the tactics and day to day activities of the SAS his overall assessment of it was mixed. He believed that JSOC and the SAS definitely degraded the insurgency and helped lead to the dramatic reduction of violence by 2008. On the other hand, the confrontations with militias led to retaliation by their Iranian backers which London had a hard time dealing with. For instance, Tehran helped Asaib Ahl Al-Haq kidnap five Brits and held them hostages for over two years to try to get Khazali released which the British eventually did. There was also no way to stop Iran’s interference in Iraq and Urban believes at best the SAS and Americans were able to contain it somewhat until they left.

Task Force Black is an interesting and enjoyable read. There are plenty of details about raids the British and Americans conducted, stories of how they took down insurgent cells, and more. Urban’s views about the British occupation and the U.S. approach to militants were also welcomed because it showed this wasn’t just a play by play book but would take a larger view and add some analysis as well. There are few books on these operations since they were mostly secret. Urban’s book is one of the better ones.