Iraq’s Oil Revenues Continue To Climb In May 2021 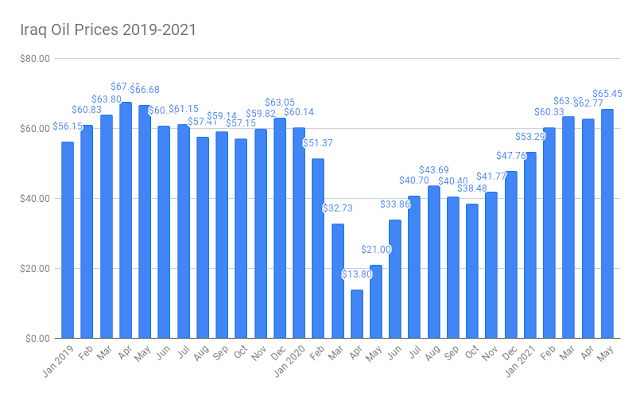 Oil prices have continued to climb into the spring providing Iraq with some much needed cash to cover the largest budget in its history. Despite its petroleum exports dropping in May 2021 its revenues were up.

In May Iraq exported an average of 2.899 million barrels a day of oil. That was down from 2.9 million barrels a day over the previous three months. Despite that its revenues reached a 16 month high of $5.882 billion. Profits have been climbing slowly since hitting a low of $1.51 billion in April 2020. That’s due to Iraq’s oil prices passing the $60 per barrel mark in February. In May its petroleum went for $65.45 per barrel up from $62.77 in April.

This is all good news for Baghdad. Its 2021 budget was the largest in history and so was its projected deficit. It was based upon $45 per barrel however. The prime minister’s financial adviser told the media the rising oil prices will now cover the deficit and will mean the government no longer has to borrow to cover its spending. The energy market always goes through ebbs and flows and is now on an upturn which greatly helps Iraq the most oil dependent country in the world.

Al Mada, “Governmental Adviser: The surplus of oil revenues will cover the deficit and cancel borrowing,” 5/25/21