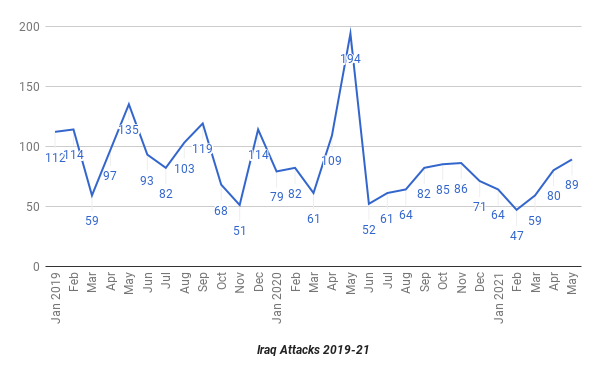 Security in Iraq went through different trends in May 2021. First, the Islamic State might have ended its annual Ramadan campaign after the second week of the month. If that proves true it will be the shortest ever by the group and another sign that it is barely holding on in the country. On the other hand, Hashd factions aligned with Iran continued their campaign against the U.S. presence.

There were a total of 113 security incidents recorded in May versus 107 in April. 24 of those were by groups aligned with Tehran and the remaining 89 by the Islamic State.

That led to 59 deaths and 100 wounded. 9 Peshermga, 11 civilians, 14 Hashd al-Shaabi, and 25 Iraqi Security Forces (ISF) lost their lives and 1 foreign contractor, 11 Peshmerga, 11 Hashd, 24 civilians and 52 ISF were injured. Kirkuk had the most casualties with 53 followed by 31 in Salahaddin and 26 in Diyala. That was a change because Diyala is usually the most violent province in Iraq. The difference this month was the Ramadan offensive which saw IS cells in Kirkuk and Salahaddin come alive after they’d been largely dormant for months. 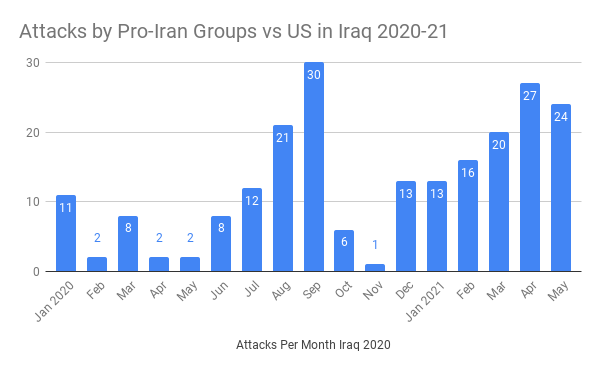 The 24 attacks by pro-Iran groups was down from 27 in April but was still the second highest monthly total of the year. As usual there was a mix of bombings of convoys providing logistics for the United States with 17 occurring across Anbar (3), Babil (2), Basra (1), Dhi Qar (3), Diwaniya (4), Muthanna (3), and Salahaddin (1), and rocket attacks. Ain Al-Asad Base in Anbar (2), Baghdad International Airport, and Balad Air Base in Salahaddin (1) were all hit and rocket launchers were also found and dismantled in Baghdad. Finally, there was a drone attack upon Ain al-Assad. Southern Iraq is where most of the IED incidents occur but now they have expanded out to Anbar and Salahaddin. Hashd units are based around the country so there is logistical support for these attacks everywhere. The stated goal of these factions is to force the United States out of the country. In the meantime they hope to impede their ability to move within the country, limit their support for the Iraqi forces and they have succeeded in grounding most of the F-16s of the Iraqi Air Force with the rocket attacks which led the American contractors that service those planes to leave. Larger picture Iran is trying to pressure Washington over sanctions and its nuclear program.

Incidents by the Islamic State have been climbing since the start of the year. There were 47 in February, 59 in March, 80 in April when the Ramadan campaign begin and 89 in May. In the middle of May however IS attacks tapered off from 26 the second week to 13 during the third and 11 during the last week. That points to the offensive coming to an end. It only lasted four weeks which would be one of the shortest since the U.S. invasion.

There is much speculation about the future of IS. The group has weapons caches across the country which are constantly found by the Iraqi forces. The U.S. said it has millions in its treasury. That begs the question if it has these resources why isn’t it using them in Iraq? Before April the insurgents were only carrying out attacks in the single digits to teens each week. When Ramadan came incidents only went up to the 20s. Perhaps IS is focusing upon rebuilding its cadres and networks which are obviously devasted. During its previous low points for example it was still able to deliver a constant flow of deadly car and suicide bombings. This year it only launched two vehicle bombs, one in April and one in May, and two suicide bombers, both in January. On the other hand, maybe the group has taken such losses it’s not capable of doing more even if it wanted to. Only time can tell which direction it’s going in. 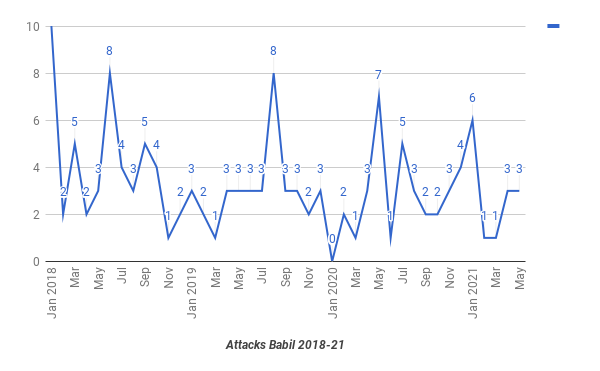 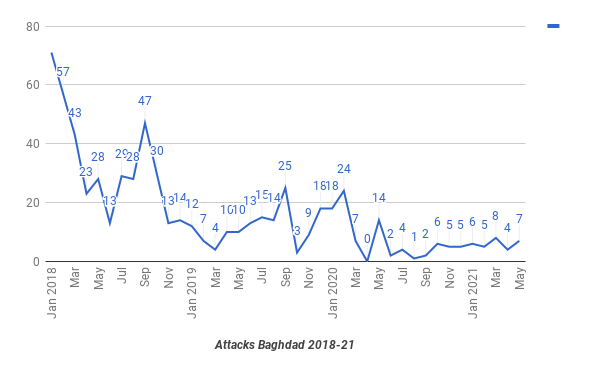 Anbar, Babil, Baghdad, and Ninewa are secondary fronts for IS. Attacks in Anbar went from 4 in April to 6 in May. It was the site of the sole car bomb during the month. Incidents remained the same in Babil with 3 in April and 3 in May. Almost all the attacks there happen in the Jurf al-Sakhr district in the northeast which is a large Kataib Hezbollah base. The militants have given up trying to infiltrate into Baghdad city but its cell in the Tarmiya district in the north carries out about one incident per week. 6 of the 7 attacks in May were in that area. 7 of the 8 incidents in Ninewa were IEDs. Anbar and Ninewa are logistics hubs for IS to move men and material back and forth from Iraq and Syria. 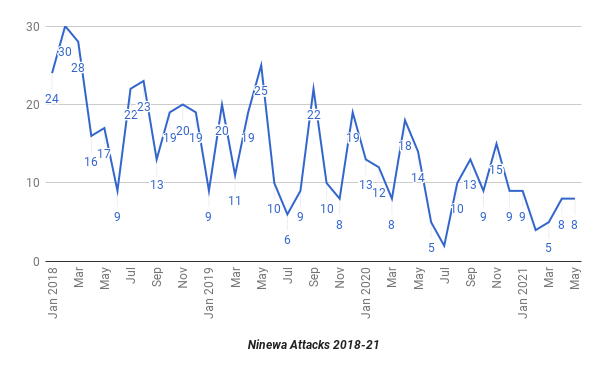 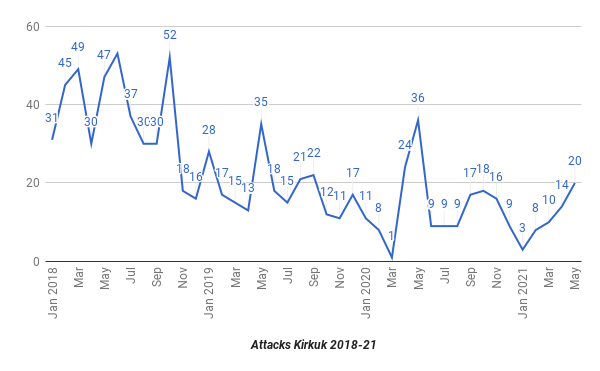 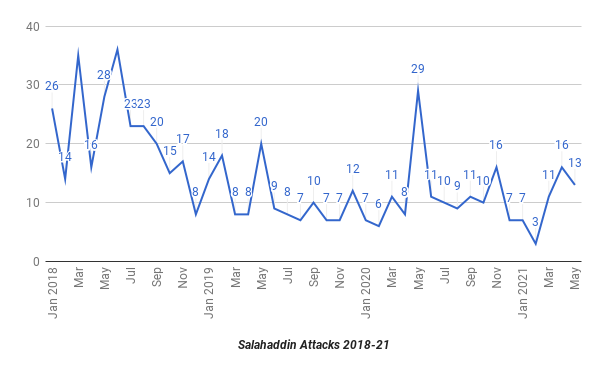 Kirkuk and Salahaddin have major bases for the insurgents but violence varies wildly there. The pattern of attacks followed the same pattern in both provinces. They dramatically dropped at the end of last year and then starting climbing in 2021. In Kirkuk incidents went from 3 in January to 8 in February, 10 in March, 14 in April and 20 in May. Likewise in Salahaddin there were 3 attacks in February to 11 in March to 16 in April and 13 in May. From April to May during the Ramadan offensive IS also went after the security forces with 2 Hashd, 7 ISF and 8 Peshmerga being killed and 2 Hashd, 10 Peshmerga and 21 ISF being injured in Kirkuk and 1 ISF and 7 Hashd dying in Salahaddin along with 5 Hashd and 14 ISF wounded versus just 7 civilian casualties overall. 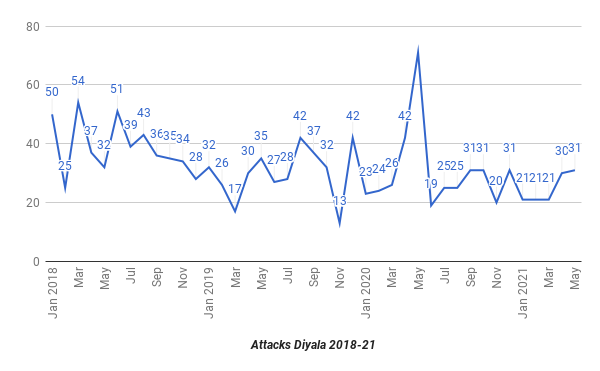 Diyala however is the center of the Islamic State in Iraq. It had the most incidents with 31 including 2 towns being assaulted, 3 gun battles, and 9 checkpoints attacked. Almost all of these were in the Khanaqin district in the northeast and Muqdadiya in the center. There the militants have driven out people and taken over their villages while exploiting the gap between the ISF and Peshmerga.

Violence By Province May 2021

NINA, "A convoy of logistical support for the international coalition forces targeted in Anbar," 5/13/21

- "Reports About Targeting A Convoy Of Logistical Support For The Int'l Coalition Forces In Anbar," 5/10/21

- "Two convoys of logistical support for the US forces targeted in Salah al-Din and Anbar," 5/6/21

Reuters, "Iraq's Ain al-Asad base, where US forces work, attacked with rocket: US Coalition," 5/24/21

Shafaaq News, "A bombing targets a logistical convoy of the International Coalition in southern Iraq," 5/27/21

- "An explosion targets a convoy carrying equipment for the International Coalition in southern Iraq," 5/14/21

- "Thwarting an attack on the international coalition in Diwaniya … and destroying ISIS targets in Diyala," 5/27/21

- "Targeting the vicinity of Baghdad airport with Katyusha rockets," 5/2/21