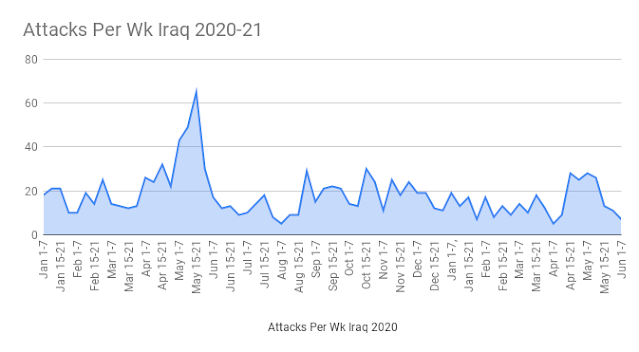 The first week of June was confirmation that the Islamic State’s annual Ramadan campaign was over in Iraq. Meanwhile pro-Iran groups have not stopped their attacks upon U.S. targets. 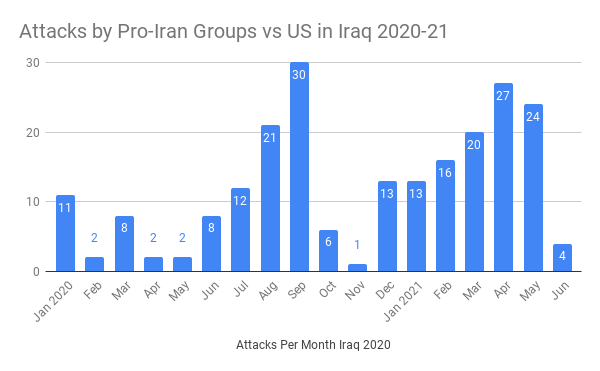 5 of those incidents were by pro-Iran groups. Two drones were shot down over the Ain Al-Asad base in Anbar, while a rocket was intercepted heading towards the Baghdad International Airport. In Basra a logistics convoy working for the U.S. was hit by an IED and five more explosive devices were found and dismantled in Dhi Qar. Finally, pro-Iran Hashd factions were suspected in the assassination of a senior intelligence official in Baghdad meant as a warning to Prime Minister Mustafa Kazemi for his arrest of a Hashd commander and his steps to limit their power. The use of drones is a new threat to U.S. personnel in Iraq. Overall, these attacks began in December 2020 to mark the anniversary of the deaths of Iranian Revolutionary Guards Quds Force commander General Qasim Soleimani and Hashd leader Abu Muhandis. They are now meant to pressure the United States to withdraw its forces from Iraq and give into Iran’s demands over sanctions and its nuclear program.

There were just 7 incidents by the Islamic State during the start of June. Those happened in Baghdad (3), Diyala (2), Ninewa (1) and Salahaddin (1). This was a sign that the group’s annual Ramadan offensive was over after just four weeks.

There were 6 deaths and 29 wounded during the week. 1 Hashd al-Shaabi, 1 member of the Iraqi Security Forces (ISF) and 4 civilians were killed and 7 Hashd and 22 civilians were injured. Baghdad had the most casualties with 28.

The Islamic State took credit for a rare attack within Baghdad city on June 3 when a bomb went off in the Khadimiya district which left 3 dead and 16 wounded. The other two incidents occurred in the Tarmiya area in the north where IS has reactivated its cell in recent months. There was a period when the insurgents were attempting to infiltrate into Baghdad itself and there were bombings about once a month. That ended around a year ago so the Khadimiya attack was a rarity.

Al Alam, "A joint force clashed with elements of ISIS south of Salahaddin," 6/3/21

Al Hurra, “A reaction and a threat to the Al-Kazemi government … Details about the assassination of the Iraqi intelligence officer,” 6/8/21

NINA, "A convoy of logistical support for the international coalition forces was targeted in Basra," 6/3/21

- "A fighter in the Popular Mobilization was wounded in an ISIS attack northeast of Baquba," 6/4/21

- "One of the Popular Mobilization Regiments was subjected to a mortar attack north of Baghdad," 6/2/21

- "Two civilians were injured by unidentified fire east of Mosul," 6/7/21

- "Within hours … the fifth bomb intended to target the coalition in southern Iraq was dismantled," 6/3/21