Review The Outlaw State, Saddam Hussein’s Quest for Power and the Gulf Crisis 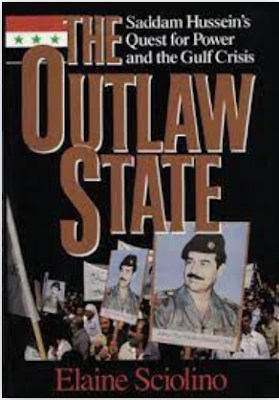 The 1990 invasion of Kuwait set off the first book boom on Iraq in the West. Many of these releases were by authors simply wishing to cash in on the fad leading to a wide range in quality. The Outlaw State, Saddam Hussein’s Quest for Power and the Gulf Crisis was one of the better books to come out during this period. The author Elaine Sciolino was a New York Times reporter who’d been to Iraq several times during the Iran-Iraq War in the 1980s and right before the start of the Gulf War. Each chapter is on a different topic from Saddam Hussein’s dictatorship to a history of Iraq to its weapons of mass destruction. Rather than just focusing upon the Kuwait crisis its main goal was to provide background to Iraq and why it went to war. Sciolino’s main thesis was that Saddam believed in using force rather than negotiations due to his background and he miscalculated the international situation.

In the immediate situation leading to the decision to invade Kuwait Sciolino argues that Saddam made four major mistakes. First, he invaded when a new international order was developing with the United States being the sole superpower. That meant he couldn’t turn to the Soviets for help. Second, he took all of Kuwait instead of just parts of it. If Iraq had just seized two islands it laid claim to for decades the situation might have been interpreted as a border dispute rather than a global issue. Third, he moved troops towards the Saudi border which was perceived as a threat. Last, he miscalculated how the world would respond believing that an Arab nation would never allow Western troops on its soil. This is a sound set of points. Sciolino and others have noted how little Saddam understood global politics having hardly ever left Iraq. His ruthless dictatorship where all his closest advisers were yes men meant he would never get a serious warning about the consequences of his actions. Ironically Saddam talked about the threat of a U.S. led unipolar world to the Gulf states and then helped create it with the seizure of Kuwait.

Next Sciolino talked about how Saddam ruled Iraq through carrots and a ruthless stick which shaped how he dealt with the Gulf War. Saddam started off as a low level member of the Baath Party mostly working as an enforcer. As he moved up he removed his opponents until he became the leader of Iraq and then continued with purges of the military and the Baath to eliminate any threat to his position. Most of these people met an untimely death. His world view therefore was shaped by double dealings and violence. When it came to Kuwait he accused it of economic warfare against Iraq by overproducing oil causing a drop in price when Baghdad needed to earn as much cash as possible from petroleum to pay for the debts of the Iran-Iraq War. He also said that Kuwait stole over $2 billion in oil from the Rumaila oil field which straddles the border between the two countries, and that his neighbor was part of a U.S. led plot against him. Saddam was set upon bullying his neighbor and even when it made some concessions would not give up on his attacks. Likewise after the invasion of Kuwait he was never serious about talks with the U.S. or other countries. This was why Sciolino called Iraq an outlaw state. She believed that Saddam didn’t understand the rules of negotiations because his whole life was based upon using force which meant that was how he was going to deal with Kuwait.

There’s a lot of other information contained within The Outlaw State as well. It covers things like how Iraq built up a huge military. How it created its WMD and nuclear programs mostly with the help of the West. Most importantly how the Reagan and Bush administrations always believed that they could get Iraq to become an ally of the U.S. by offering it endless incentives such as trade deals and credits to buy American products while never being serious about challenging the country about its many egregious actions like using WMD during the Iran-Iraq War and against the Kurds. Even as the dispute between Iraq and Kuwait grew Washington didn’t believe Saddam would resort to force because it was so set upon good relations. That’s an important piece of the story to the Gulf War and another reason The Outlaw State is a worthwhile read.