Review Iraq, A Report From The Inside

Hiro, Dilip, Iraq, A Report From The Inside, London: Granta Books, 2003 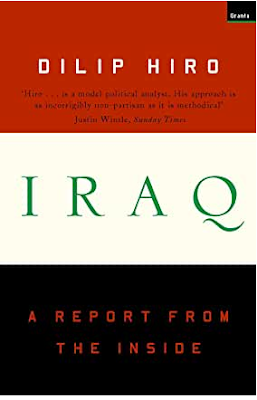 This book got two releases. It was originally published as Iraq, In The Eye of the Storm in 2002. Then it switched publishers and came out as Iraq, A Report From The Inside the next year. There was absolutely no difference between the two other than the title. Dilip Hiro was one of the few people consistently writing about Iraq from the 1980s-2000s. This book covers the country from the Gulf War to just before the 2003 invasion. The two most interesting parts were the plots against Saddam and the U.N. inspections.

There were two major attempts to overthrow Saddam in the 1990s, both of which failed miserably. First, in 1995 the Iraqi National Congress (INC), the Patriotic Union of Kurdistan (PUK) and the Kurdistan Democratic Party (KDP) wanted to start a military revolt by taking the northern cities of Mosul and Kirkuk. The INC was working with former military intelligence chief General Wafiq al-Samarrie who claimed he knew military commanders who could kill Saddam. The rival Iraqi National Accord (INA) had its own plot underway and went to the CIA and successfully got it to pull its support. That led the KDP to abandon ship as well. The INC and PUK went ahead anyway and completely failed. The INA fared no better as Iraqi intelligence infiltrated the group from the start and humiliated it and the CIA. In the wake of the Gulf War, many Iraqi opposition groups believed they could get western backing and get rid of Saddam. Unfortunately the divisions within the movement also meant lots of rivalries and back biting and no real successes.

The discussion on U.N. inspections focused upon their increasing aggression and the U.S’s attempts to manipulate them in the 1990s. First, exasperation at the Iraqis continual denials led to the U.N. switching from finding their weapons programs themselves to how the Iraqis were trying to hide them. The inspectors worked with American, British and Israeli intelligence to try to break Iraqi communications to find out what the Iraqis did before a team arrived at a suspected site to discover which organizations and officials were behind the deception campaign. On the other hand, the Clinton administration went from backing the inspections to using them to try to overthrow Saddam. The White House wanted the U.N. to create confrontations with Baghdad that could then be used to justify military strikes. The CIA ended up placing their agents within the U.N. teams, planting their own devices within the U.N. monitoring and communication systems to spy on Iraq, and even used the inspections in the Iraqi National Accord coup plot. The U.S. didn’t believe Iraq was ever going to come clean about it nukes or WMD, so decided to use the inspectors for its own policies. The grand irony was that the inspections led Iraq to destroy its WMD and end it weapons programs in the early 1990s but neither they nor the U.S. ever knew about it.

Iraq, A Report From The Inside provides lots of details about Iraq in the 1990s. It starts with the common people, and then moves to the regime and the outside interference. It gives a well-rounded view of the country when many books just focus upon either Saddam or the United States.