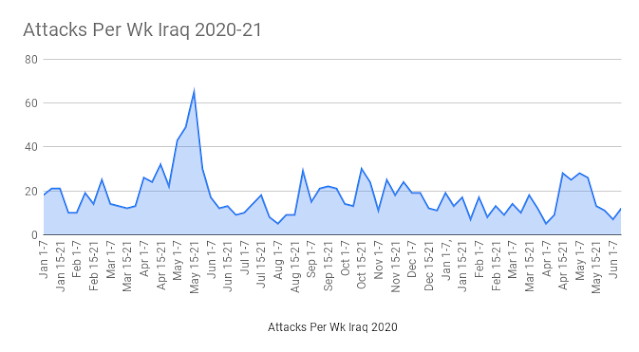 The Islamic State has gone back into hibernation after a very unimpressive Ramadan offensive. Pro-Iran groups however are continuing with their campaign against U.S. targets in Iraq. 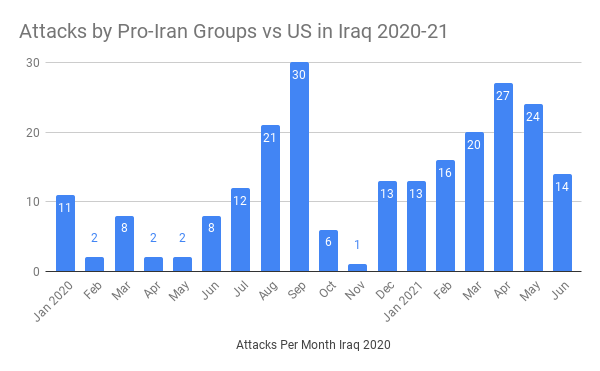 10 of those incidents were by pro-Iran groups. IEDs hit logistics convoys working for the Americans in Baghdad, Dhi Qar, Diwaniya, Muthanna and Salahaddin. The Dhi Qar attack led to one foreign contractor and two Iraqis being wounded. A bomb was dismantled in Dhi Qar as well. Additionally, drones hit the Baghdad International Airport twice and rockets were fired at the Balad Air Base in Salahaddin. Rockets that were reportedly meant for Balad were also discovered in Diyala. Most of these types of incidents have become routine but the drone strikes are something new. Some Hashd groups recently held a military parade where they showed off the array of drones they have received from Iran. While the explosive payloads on these vehicles are likely small they can be more accurate then unguided missiles which have been the traditional way to hit targets like bases and airports.

There were just 14 casualties during the week. 7 were killed including 3 members of the Iraqi Security Forces (ISF), and 4 civilians and another 1 ISF and 6 civilians were injured. The low number of dead and wounded are another sign that IS is hardly active in the country right now.

In Anbar a car bomb was dismantled in the Rawa district. Vehicle bombs are very rare and there are hardly any attacks in Anbar so the device was likely heading to another province. In Babil an IED exploded in the Jurf al-Sakhr district in the northeast. Insurgents infiltrate into this area from neighboring Anbar because it is a large Hashd base with army units on the outskirts providing plenty targets. In the Tarmiya district of northern Baghdad a farmer was killed. IS has recently activated its cell there with attacks happening there about once a week now. The killing might be intimidation or to extort money from the man’s family. There were two incidents in Diyala in the Muqdadiya are in the center. That included an IED and an attack upon the army which left 1 civilian wounded and two soldiers dead respectively. Diyala is the center for the Islamic State in Iraq but this week it was hardly active even there. An old IED went off in the Makhmour area of southern Irbil killing 1 and wounding 2 others. It might have been a relic of the war versus IS. In Ninewa two electricity towers were blown up in the southeast.

Kirkuk ended up being the most violent governorate in Iraq during the week. Powers towers were destroyed in two separate incidents. There was also a kidnapping and two shootings, one on a police convoy. IS has major camps in southern Kirkuk where it was never expelled. Attacks have gone up and down there however. With incidents being up since the start of the year after declining at the conclusion of 2020.

Iraq Newspaper, "Iran detonates an explosive device targeting a convoy of the international coalition's supplies on the outskirts of Salahaddin without losses," 6/13/21

NINA, "3 Convoys Of Logistical Support For The Int'l Coalition Targeted With IEDs In Three Governorates," 6/13/21

- "An officer was martyred after being attacked by a sniper fire west of Kirkuk," 6/12/21

Shafaaq News, "Drone targets a military base at Baghdad airport," 6/13/21

- "Injuries in an explosion targeting a support convoy for the international coalition in southern Iraq," 6/13/21

- "Thwarting an explosion that was intended to target a logistical support convoy for the coalition in southern Iraq," 6/8/21

- "An officer was killed and an affiliate wounded in an attack south of Kirkuk," 6/12/21