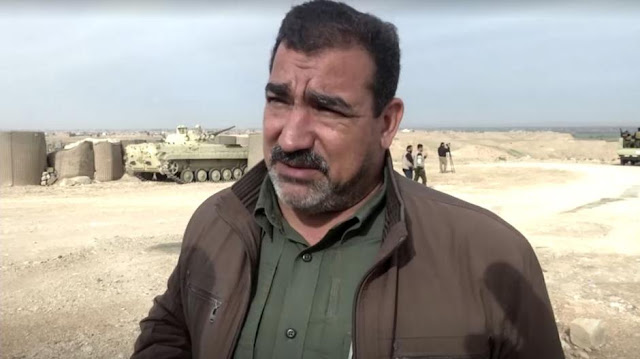 Arrest of Qasim Musilh set off the third confrontation between PM Kazemi and the Hashd
Prime Minister Mustafa al-Kazemi decided to take on the pro-Iran factions once more and this time appears to be standing his ground. After the Hashd commander for Anbar was arrested there was a standoff between the Iraqi forces and groups aligned with Tehran in Baghdad. There were plenty of reports that the premier caved once more and released the suspect, but that proved untrue. It’s now up to the Iraqi courts to see whether the government is serious about holding these groups accountable.

On May 26 Qasim Muslih the head of Hashd operations in Anbar and the commander of the Tufuf Brigade was arrested. He was detained by a task force sent by the Anti-Corruption Committee led by Ahmed Abu Ragheef. Muslih is suspected in the death of Karbala protest leader Ihab al-Wazni who was assassinated on May 9, along with attacks upon other activists and involvement in firing rockets at the Ain al-Asad base in Anbar. Pro-Iran groups have been carrying out a steady stream of assaults upon U.S. targets in Iraq since December. They were also blamed for a campaign of threats and killings against the protest movement that started in 2019.

This led to an immediate confrontation with pro-Iran Hashd units. Hashd forces inside and outside of Baghdad’s Green Zone mobilized and carried out a show of force and demanded the release of Muslih. That included bringing men from Babil and Basra and surrounding the homes of Kazemi and Abu Ragheef. The Counter Terror Service and other forces were deployed to the Green Zone to stand up to them. During this period there were tons of reports that Kazemi had given into these threats. Those proved to be Hashd propaganda releases and the government assured the public that Muslih was still in custody. The Hashd groups eventually backed down and the Defense Ministry gave a stern warning to them that they would lose if any shooting started. There have since been stories that Muslih confessed to the assassination of protesters and that the men responsible for the death of Wazni were arrested as well. The Hashd are officially part of the government’s security forces but that exists in name only. They follow their individual commanders and the most powerful groups are funded and aligned with Iran. This was the latest example of them showing their contempt for Baghdad and the rule of law.

Premier Kazemi has consistently said that he stands with the demonstrators and that he would bring to justice those that have attacked them. He has failed every time he’s tried to follow through with that promise. In June 2020 Iraqi forces raided the Kataib Hezbollah headquarters in Baghdad and arrested 13 men including three commanders for attacks upon Iraqi bases that housed American personnel. Kataib Hezbollah threatened Kazemi and negotiations eventually led to the prisoners being turned over to the Hashd Commission who then released them. This pattern was repeated in December when a commander and three other members of Asaib Ahl Al-Haq were detained for rocket attacks on the Green Zone. Armed Asaib Ahl Al-Haq men paraded around Baghdad and said they were waiting to take on the government to free their compatriots. Kazemi had the Counter Terror Service deployed to the capital, but then released the Hashd members again. These were two slaps in the face for Kazemi which highlighted the limits of his power. He appeared weak and vulnerable to intimidation.

The arrest of Muslih showed that the premier will not be intimidated this time. He not only did not release him but threatened the Hashd right back. That’s only half the story however. Muslih’s case has to go to court and he has to be found guilty for this to be a real victory. Powerful people are routinely freed by the justice system as it is vulnerable to political interference and witnesses have been intimidated into not giving evidence. Still this is the first time Kazemi has not caved and asserted that he is the leader of the country.

Buratha News, “The arrival of Qasim Muslih to the house of the head of the Popular Mobilization Authority,” 5/26/21

- “Brigades of the Popular Mobilization Forces cordon off sites inside Al-Khadra including Al-Kazemi’s home,” 5/26/21

Al Hurra, “Conflict over the fate of Qasim Muslih … and a government source denies the Al-Hurra website as rumors,” 5/27/21

Iraq Newspaper, “Now, news is reported of the arrest of a leader in the Popular Mobilization, Hassan Isbah, Hamza Al-Kaabi, the intelligence officer of the Al-Tofuf Brigade, and 3 others in Karbala,” 5/29/21

NINA, “The Green Zone Closed And Counter-Terrorism Service Forces Deployed Within It,” 5/26/21

- “A Joint Security And Military Committee Formed To Investigate The Issue Of The Arrest Of Qasim Musleh,” 5/26/21

- “Al-Kadhimi: Qasim Musleh Is Now In The Custody Of The Joint Operations Command Until The End Of the Investigation With Him,” 5/26/21

Reuters, “Iraq arrests chief of Iran-backed PMU over attacks on base hosting US forces: Sources,” 5/26/21

Shafaaq News, “The crowd elements are gradually withdrawing from the Green Zone entrances,” 5/26/21

- “Dozens of vehicles belonging to the crowd enter Baghdad, coming from two provinces,” 5/26/21