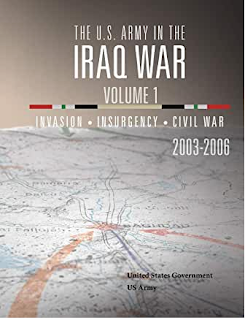 In March 2003 the United States invaded Iraq. It only lasted three weeks, much quicker than was expected. While the U.S. was assured of a victory everything did not go as planned which is the topic of the third chapter of the U.S. Army history of the Iraq War.

On March 17, 2003 President Bush gave Saddam Hussein and his two sons 48 hours to leave Iraq. The war was supposed to start four days later, but the Americans received intelligence that Saddam was at a location in Baghdad and ordered a cruise missile strike to kill him on March 19. He was never there but that marked the formal declaration of war. Special forces from the U.S., England and Poland seized ports in the southern province of Basra. Another American special forces unit was placed in Dhi Qar province to seize important bridges, one was sent to Anbar to hunt for ballistic missile sites, while more special forces and an airborne brigade arrived in Kurdistan to work with the Kurds to seize major cities in northern Iraq. The ground invasion started on March 21. The Iraqis were caught off guard because they expected a long air campaign like the Gulf War to come first. Leaflets were also dropped on Iraqi formations telling soldiers to surrender and calls were made to officers telling them the same thing. There is a popular narrative that most Iraqi soldiers deserted and didn’t fight. The Army history points out that in the south many troops left their posts but there was not the unit collapse that was expected. After the war Iraqi soldiers told the Americans their leaflets had such bad Arabic they couldn’t understand what they meant.

There were two faults with the U.S. invasion plan. First, it expected the main opponent to be the elite Republican Guard and second it wanted to skip the cities in the south and drive straight for Baghdad to decapitate the regime. Neither of those worked out. The Republican Guard were largely destroyed by air strikes and there was no major tank battles like when the two clashed during the Gulf War. Instead, the Fedayeen Saddam militia put up the biggest fight in the south and Baghdad. Their presence was first reported on March 22 but the U.S. command did not take them seriously. Then combat began against them in the cities of Samawa, Nasiriya and Zubayr. This threatened the American lines of communication and logistics in the rear and some units were diverted to clear and hold those areas as a result. The invasion was still over quickly and Saddam overthrown but there are always surprises in war. The U.S. was just focused upon Iraq’s conventional forces and knew little to nothing about the Fedayeen. The drive for Baghdad was also the result of Rumsfeld and U.S. commander General Tommy Franks believing that the capital was all that mattered and most other aspects could be ignored.

After the invasion some like Rumsfeld claimed that it was proof that the Revolution in Military Affairs theory worked. That was the idea that modern warfare would be determined by technology, air power and speed rather than large ground forces something the Secretary of Defense told the Senate in July 2003. The Army history argues that wasn’t true. It believes the main reason why the Iraqi regime fell so quickly was that it was a weak opponent that didn’t put up much of a fight. Saddam for instance didn’t believe an invasion would happen until right before it did and was convinced that the main U.S. force would come from Jordan and refused to move forces to face south where the Americans were really approaching from. The Iraqi military was also severely degraded due to the sanctions. Of course, the fall of Saddam wasn’t the end of the war either and a long occupation would show that U.S. didn’t have enough troops to secure the country.