Review Turkey, the US and Iraq 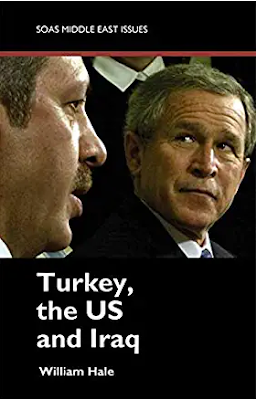 Turkey, the US and Iraq by William Hale is a history of Turkish-Iraq relations and the role of the United States from the foundation of Iraq in 1920 to the start of the U.S. occupation. Hale believes the relations between Turkey and Iraq went through three main phases. First, Turkey laid claim to northern Iraq after World War I. Then the Kurds became a major issue in the 1980s. Finally the U.S. began demanding that Turkey help it with its conflict with Iraq starting with the Gulf War and then the 2003 invasion. In the process Turkey completely changed its policy towards Iraq, which is the main point of the book.

The creation of Iraq after World War I was one of the first foreign policy issues for the new state of Turkey. Ankara laid claim to the Ottoman province of Mosul in northern Iraq which the British had occupied after the armistice. The British being one of the victors in the war held the advantage and the League of Nations ruled in 1925 that Mosul should go to Iraq which was upheld by the Permanent Court of International Justice. Turkey eventually decided it wasn’t worth going to war over the province and that it would be better to forge good relations with England. This was assisted by the British agreeing to pay Turkey 10% of the royalties from Iraq’s oil production. Afterward this would set a precedent for Turkish foreign policy. After claiming Mosul it would then demand that Iraq’s territorial integrity be maintained to make sure that its Kurdish population did not push for independence.

The Kurds became an issue in the 1980s. That was when the Kurdistan Workers’ Party (PKK) began an insurgency against the Turkish government. They were able to set up bases in Iraq because Baghdad lost control of the border during the Iran-Iraq War. The two countries signed agreements in 1983 and 1984 that allowed incursions into the other’s territory to chase the Kurds which Turkey did in 1983, 1986 and 1987. During Iraq’s 1988 Anfal campaign against its Kurds thousands of refugees entered Turkey. This would shape relations between Turkey and Iraq until the present day. First, Turkey was always worried about the PKK leading to constant military operations against the group leading it to often moving into Iraq. Second, Iraqi Kurdish refugees would become an even bigger issue after the Gulf War. Ankara’s response was to force the displaced back into Iraq and demand a security zone be set up until the crisis ended. Turkey would make a similar demand during the 2003 invasion. Finally, Turkey had to decide on how to deal with Iraq’s Kurds. It was worried that they would take advantage of the instability in Iraq after the Gulf War and Iraq War to declare independence. At the same time it sought alliances with the two main Iraqi Kurdish parties to gain influence with them. Hale has plenty of details on how the Kurdish issue dominated Turkey’s foreign policy. He points out that Ankara always dealt with the PKK as solely a military threat and was unwilling to make political concessions as a result. Likewise, its fears of Iraqi Kurds led to both apprehension and new relationships as Turkey tried to co-opt them.

The last point of the book deals with America’s influence upon Turkey’s relationship with Iraq. This went through two periods and was always driven by Ankara’s desire to maintain close ties with the U.S. First, during the Gulf War Turkey cooperated with Washington on sanctions and allowed its bases to be used in the war. Second, the 2003 invasion proved a crisis for Turkey. It didn’t agree to allow the U.S. to use its territory for the war and believed it had lost influence with both Washington and Iraq in the process. Hale argued this turned out to be a blessing in disguise as Turkey was kept out of the Iraqi occupation and the Kurds didn’t declare independence. Its friendship with the U.S. wasn’t affected long term either. The author made an interesting observation that Turkey looked west and wanted to be integrated into Europe but the Americans only saw its importance due to its possible influence upon the Middle East.

Turkey, the US and Iraq explains how Turkey’s policy towards Iraq has changed over the decades. Ankara for instance went from claiming northern Iraq to making the territorial integrity of Iraq being its main priority to make sure the Kurds didn’t declare independence. That also shifted its focus from dealing with Baghdad to Kurdistan. Finally, Turkey was drawn into America’s two wars with Iraq being a supporter of one and an opponent of the other. In the end, Turkey increased its influence in its neighbor’s affairs becoming the main partner of the Iraqi Kurds. Hale provides a good history of these ins and outs of Turkey’s foreign policy. It’s a very short read but full of information.