The Islamic State was busy during the third week of June carrying out 20 attacks in Iraq. Its main target was infrastructure with a series of bombings of power towers. Pro-Iran groups were responsible for four incidents as well in their continued campaign against American targets.

There was a total of 24 security incidents recorded in Iraq from June 15-21. That was the most since 30 incidents during May 8-14 when IS was carrying out its very short Ramadan offensive. 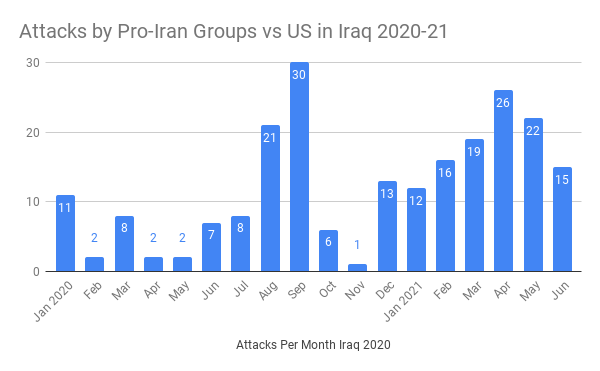 There were four incidents by pro-Iran factions. Two convoys carrying supplies for the U.S. were hit by IEDs in Anbar and Diwaniya. A third bomb was discovered and dismantled in Baghdad. Rockets were also fired at the Ain Al-Asad base in Anbar. Trucking is the main target of these groups because they are easy to hit. Those attacks used to just be in the south but have since expanded to central Iraq and Baghdad. Rocket fire has become a mainstay as well.

That was up from 12 incidents the week before and the most since the 2nd week of May.

Casualties rose as well. There were 14 killed made up of 1 Hashd al-Shaabi, 6 members of the Iraqi Security Forces (ISF), 7 Civilians along with 14 wounded including 3 ISF, 4 Hashd, and 7 civilians. Diyala had the most casualties with 16. The other provinces were in single figures.

There was just one incident each in Anbar and Ninewa. A checkpoint was shot at in the Rutba district of Anbar, while an IED wounded a civilian in Shura in southern Ninewa. These two provinces are used for supplies by the insurgency and only see a few attacks per week as a result.

IS cells are back to work in Baghdad. There was a gun battle in Tarmiya in the north which is the main base for the militants in the province. An IED went off in the south and another bomb was dismantled before it could blow up an electricity tower. The incident in the south is important. For two years the insurgents mounted a concerted campaign to infiltrate into Baghdad city from the north, south and west. Then they gave up and only recently restarted attacks in Tarmiya. If it has cells working again in the south that would be a new escalation.

Kirkuk and Salahaddin have major IS bases but violence constantly fluctuates there. The previous week Kirkuk had the most incidents of any province. This week there were just two IEDs. One of those blew up a power station. Salahaddin only had one attack during the first two weeks of June and then 5 this week. There were three bombings of electricity towers, along with two other IEDs. The power network was the major target of IS during the week. It’s summertime in Iraq where the temperatures regularly cross 100 degrees Fahrenheit so taking out the delivery of power has an immediate impact upon the population and seeks to undermine the standing of the government.

Diyala had the most attacks during the week which is the norm. Two electricity towers were blown up in one incident. There were two other IEDs, three checkpoints were assaulted, and a soldier was kidnapped and stabbed to death. One incident was in Khanaqin in the northeast and four others were in Muqdadiya in the center. Those are the most violent areas of the country.

NINA, "A Body Of A Soldier Found Hours After His Disappearance In Diyala," 6/19/21

- "Security Forces Open An Investigation Into The Death Of Two Citizens In An IED South Of Baghdad," 6/20/21

- "Three soldiers were killed and wounded in an explosive device explosion in Diyala," 6/15/21

- "Three soldiers were wounded by an explosive device, south of Kirkuk," 6/19/21

- "A young man was injured in an explosive device explosion south of Mosul," 6/16/21

Shafaq News, "3 members of the crowd were injured in an explosion in Salahaddin,” 6/17/21

- "An explosion targets a support convoy for the international coalition in southern Iraq," 6/16/21

- "Thwarting an explosion prepared to target a support column for the International Coalition, west of Baghdad," 6/16/21

- "A victim and two wounded form the Defense Mobilization in clashes with ISIS in Diyala," 6/20/21

Sotaliraq, "Wounded in an attack by armed men believed to belong to ISIS on a house north of Baghdad," 6/19/21

Al Sumaria, "An employee of the Interior Ministry was injured in an armed attack north of Baghdad," 6/17/21

- "Seven people were killed and injured in an attack on a mooring point in Diyala," 6/20/21