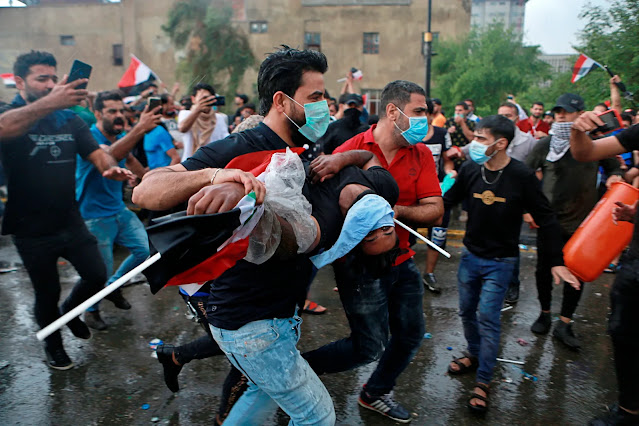 There has been no justice for activists that have been attacked and killed during protests U.N. finds (AP)

The United Nations has been recording assaults upon Iraqi demonstrations since they began in October 2019. It released a report in May 2021 on the government’s continued failure to protect people’s right to protest and hold those responsible for attacks responsible. The U.N. feels Baghdad is failing at basic governance.

When demonstrations began they immediately came under attack. From October 1 to 8, 2019 107 protesters were killed. That included gunmen firing at the Baghdad protest site on October 4-5, 2019. December 6, 2019 around 100 armed men entered that area and killed 22 people and wounded another 116. On February 5, 2020 7 protesters were killed and around 100 injured by gunfire in Najaf. Many of these acts were blamed upon the Hashd who targeted the demonstrators because they spoke out against Iranian influence in Iraq. The riot police have also consistently used live ammunition and killed people despite Prime Minister Mustafa Kazemi banning that practice. This points to a basic lack of authority by the premier not only amongst the Hashd who are only nominally under his control but the regular police as well.

Individuals involved in the protest movement have also been targeted. From October 1, 2019 to May 15, 2021 the U.N. documented 48 attempts on the lives of activists which led to 32 deaths and 21 injured. 32 protesters were also kidnapped during that period with 20 still missing. The Iraqi Human Rights Commission has much higher figures of 76 missing persons that have been identified and another 18 who have not along with 81 assassination attempts upon activists and journalists with 34 killed. Hashd factions have been blamed for these incidents. Those groups launched a concerted campaign of threats, intimidation, abductions and assassination attempts. Many people have fled their homes and some have even left the country because they feel their lives are in jeopardy.

The government’s response to this violence has been what it always does during controversies which is to set up investigations and committees that feign action. The first was opened in October 2019 by the High Judicial Council which created offices in each provinces to look into attacks. The second one was in December 2019 started by Prime Minister Abd Abdul Mahdi. It found 44 members of the Iraqi Security Forces responsible for killing demonstrators but nothing was done about it. It did not mention the Hashd at all. Then in May 2020 Premier Mustafa Kazemi created his own committee. That was followed by another in October 2020. Also in July 2020 the Judicial Council made a second commission specifically for Baghdad, and most recently told protesters a new investigation would begin in June 2021. The Iraqi government has never been responsive to the public. That’s why committees are always formed. It makes it seem like the authorities are doing something but nothing ever comes of them because they’re not meant to lead to any substantive results.

The committees were supposed to lead to arrests, trials and convictions but that hasn’t really happened. From February to May 2021 members of the security forces were arrested in Basra, Maysan and Karbala for assaults and deaths. Additionally in May 2020 five people were detained for shooting at protesters. 3 were released for lack of evidence while two are still being held today. There have only been two cases where people have gone to trial and been convicted and that was for low ranking police officers. Otherwise there has been no justice for those that have been shot at and murdered. This is the main criticism of the United Nations that Baghdad is not holding anyone responsible and neglecting its basic duties.

The government did classify murdered protesters as martyrs so that they could be compensated but even that hasn’t gone off well. PM Abdul Mahdi announced this on October 5, 2019. The Head of the Martyrs Foundation told the U.N. in January 2021 that over 90% of the murdered activists had received money even though it provided no details. In March 2021 the United Nations interviewed 47 families that had lost someone. Only 3 had gotten money from the Martyrs Foundation, 27 said they had been contacted but not received anything while the rest either didn’t care or never got any information from the Foundation. Again, the bureaucracy is failing even at something that should be straight forward.

Iraq has witnessed demonstrations for the last eleven years. The demands have always been the same for political reform, better services, an end to corruption, etc. The authorities have never made any serious attempt to meet these requests. Instead they have tried to clamp down on the protesters. Premier Kazemi was the first to say that he stood with the activists but even he hasn’t been able to keep any of his promises for justice. He can’t even get the police to stop shooting at people even though they should be under his direct control. Baghdad has never held itself accountable so it can’t be expected to do anything about the abuses activists have faced.

Al Sumaria, “Al-Kazemi calls for the use of live ammunition not to be used during securing civilian protests,” 3/17/21

United Nations Assistance Mission for Iraq, “Update on Demonstrations in Iraq: Accountability for Human Rights Violations and Abuses by Unidentified Armed Elements,” May 2021