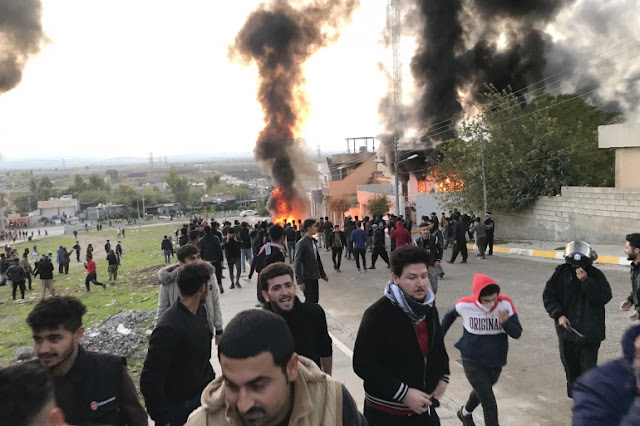 Protest in Sulaymaniya 2020 (Anadolu Agency)
The Kurdistan Regional Government (KRG) recently had a high profile case where it sentenced five activists and journalists to six years each on trumped up charges of threatening the security of the region and ties to the Kurdistan Workers’ Party (PKK). The real reason why they were imprisoned was because they reported on and took part in protests against the regional government. The United Nations issued a report in May 2021 noting that this was just one of many situations where freedom of expression and the press were being curtailed in Kurdistan.

The United Nations found dozens of cases where reporters, human rights activists and protesters were intimidated, threatened, harassed and arrested and legal procedures were not followed. There were 33 cases where people were arrested without being told of their charges and were denied access to lawyers. Others were held for long periods of time, sometimes for months without being brought before a judge and then released. In August 2020 a reporter was arrested for covering a protest in Dohuk. He was held for 10 days without seeing a judge, lawyer or family and then released. There were other cases where journalists and human rights activists were arrested, charged, released on bail and then re-arrested on different charges. One man was detained after posting on Facebook that the KRG was using COVID curfews as an excuse not to pay government workers. He was held for two weeks, released and then re-arrested two days later for defaming a senior official. All these situations were seen as being critical of the regional government. The arrests were meant to be a message to the public to not get involved and not criticize the KRG.

The government has also gone after media outlets. Offices in Dohuk, Irbil and Sulaymaniya were all raided last year for covering protests although that was not the official reason. Again, the KRG was going after organizations not just individuals to intimidate them into not reporting on demonstrations.

Kurdish officials have repeatedly said that they support freedom of the press and speech but their actions speak louder than words. The KRG has been doing this for years but it is doing it more often now because of the region’s financial troubles. A bloated civil sector, bad decisions, the collapse of the oil market, COVID and disputes with Baghdad over the budget have left Kurdistan deeply in debt and unable to pay its bills. That has led to a wave of protests, subsequent media coverage, and then crackdowns.

Human Rights, “Freedom of Expression in the Kurdistan Region of Iraq,” May 2021