Review Basrayatha, The Story Of A City 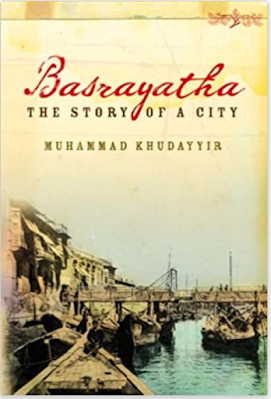 Muhammad Khudayyir wrote that every city spawns storytellers and Basra was what created him. He is a true wordsworth. He has an amazing style and a way with vocabulary that makes much of his writing seem like poetry sometimes. His book Basrayatha, the Story Of A City is a true experience.

The first thing that strikes you about Basrayatha is the use of language, metaphors, etc. For instance, Khuddayir writes, “Dawn: gray life emerging from a cracked egg, the heavy air sweeping the streets, preparing for a new day. The roads were moistened by the dew, and the umbrellas of traffic cops ballooned like mushrooms, even though the street lights still shone.” One of the author’s greatest strengths is his ability to create an entire world with his use of language and transport you there.

Each chapter has a topic which goes in all different directions. One is about how Basra has grown. Another is on the Shatt al-Arab waterway. He says that the river is one of dreams that brings back the past to the present. There’s history of how the Tigris and Euphrates eventually joined together to form the Shatt al-Arab to then how that gave rise to an environment and habitation and development; that it was the life of Basra. Another time he writes about how visitors to a mosque might find a book about dates and then writes about the date trees and the trade caravans and more. He doesn’t let his ideas be contained but rather uses them to explore all kinds of different subjects.

Basrayatha is a joy to read. I found myself excited to turn the page to see where Khudayyir was going. It’s also extremely short at under 200 pages and can easily be read in one day.

My brother recommended I would possibly like this web site.
He used to be totally right. This publish actually made my day.
You can not consider simply how much time I had spent for this information! Thank you!