Review When God Made Hell, The British Invasion of Mesopotamia and the Creation of Iraq, 1914-1921

Townshend, Charles, When God Made Hell, The British Invasion of Mesopotamia and the Creation of Iraq, 1914-1921, London: Faber and Faber Limited, 2010 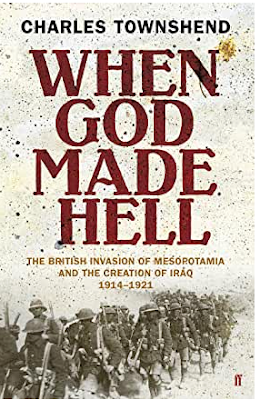 Charles Townshend wrote a very engaging history with When God Made Hell, The British Invasion of Mesopotamia and the Creation of Iraq, 1914-1921. What started out as a military expedition to protect England’s oil interests in Persia led to an extended campaign to seize as much Ottoman territory as possible in Mesopotamia during World War I. The whole time London never enunciated its goals or strategy and that continued after the war as well. It proved to be a classic example of mission creep with an unintended consequence of the new country of Iraq being created.

Part of Townshend’s thesis is that London saw Mesopotamia as a target of opportunity even before World War I started. The author shows how two months before the Ottomans joined the Great War in November 1914 the British were planning to seize its province of Basra. The British wanted to secure its oil concessions in Persia and dominate the Persian Gulf. There were also constant unfounded fears that the Germans were attempting to rally the Persians and attack India England’s most important colony. First gunboats were sent to the area and then an infantry brigade from India was diverted to seize Basra even before war was declared on the Turks. From there the British generals constantly marched north until it had seized the Ottoman vilayets of Basra, Baghdad and Mosul. Sometimes this was justified as protecting what the English had already gained. Other times it was said a show of force would convince the local Arabs to accept British rule. Finally, English officials in India dreamed of making Mesopotamia a colony. The book has plenty of quotes from the British leadership about how haphazard a campaign it was taking modern day Iraq. That was due to lack of any strategy. The British kept marching north simply because it was there. Baghdad province for instance was seized because the commanding general wanted to. This was unbridled imperialist expansion. That’s the first strong point of the book. Again and again it shows how the English seized more and more territory sometimes without even orders to do so.

The ad hoc nature of the war continued after it was over. London couldn’t decide what to do with what would become Iraq. India and the chief political officer Sir Arnold Wilson wanted direct rule and to run Iraq like a colony. In London there were thoughts about setting up an Arab government under British hegemony. That was supported by Arabists such as T.E. Lawrence. That brought up another problem of who should be the Arab leader and there was no consensus there either. The Paris peace conference to end World War I decided that Iraq would be a British Mandate under the League of Nations but even then no one knew exactly what that meant. The new country of Turkey was also laying claim to the Mosul province so nothing could be done until that issue was resolved. That left Wilson to do as he pleased and continue with setting up a British administration and largely excluding Arabs which he believed incapable of self-government. That would lead to the 1920 Revolt as southern and central Iraq rose up against the English. That was when it was finally decided to make Faisal from what is today northern Saudi Arabia the king of Iraq. Townshend repeatedly notes that the British entered Iraq with no plan. It took them six years to figure out what to do. This was the unintended consequence of the war. London didn’t even plan on creating a new country but that’s what it ended up doing. It faced a near disaster in doing so with its mismanagement and the revolt that led to.

Townshend did his research on the British campaign. There are plenty of quotes from both the generals and common soldiers about how hard it was in Mesopotamia with the weather and the lack of supplies and preparation due to there being no strategy. On the other hand, there’s little to nothing on Turkish views and only a bit better with Iraqis after the war. This wasn’t the only history that only focuses upon one side in this conflict. It appears that few Westerners have gone through any Turkish histories or archives. When God Made Hell is still a good read and its thesis is convincing that the British didn’t know what it was doing in Iraq. There are also plenty of parallels with the U.S. invasion and occupation although the book doesn’t explicitly go over them.