Iraqi Crude Prices And Revenues Continued To Rise In July 2021 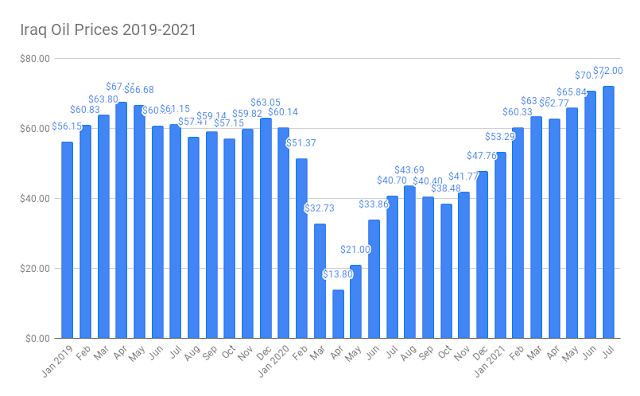 Iraq’s oil exports and revenues increased in July as petroleum prices continued to rebound in 2021.

In July prices and revenues went up as well. A barrel of Iraqi crude went for $72 per barrel, the highest in three years. Prices started at $53.29 in January and has consistently risen since then as world demand has increased after a crash during the COVID pandemic. In 2021 the country is averaging $64.04 per barrel an improvement over 2020’s $38.80. That has meant Iraq’s profits rose from $6.141 billion in June to $6.513 billion in July. Last year Iraq averaged $3.493 billion a month. This year that figure is at $5.669 billion. This is good news for the Kazemi government which passed the largest budget in history. It also had the largest predicted deficit which has now disappeared due to the oil market.

Al Zawraa, “Oil: Our revenues for the month of July amounted to more than 6 billion dollars,” 8/1/21