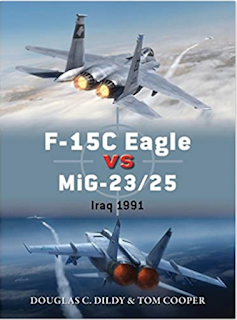 F-15C Eagle vs MiG-23/25, Iraq 1991 was part of Osprey’s Duel series where they took two weapons systems that faced off against each other and compared them. All the books follow the same format. They explain how the weapons were developed, their specifications, the two sides that used them, the combat that took place and then a closing evaluation. This one focuses upon the U.S. facing Iraq in the Gulf War where the U.S. achieved a resounding victory but not without some losses and difficulties.

The first thing that stands out is the inferiority of many of the Soviet designs. The MiG-23 for example was put together quickly before all its components were ready. It had bad handling, lacked maneuverability, its radar was unreliable and it was accident prone. It was constantly redesigned and upgraded but never fixed some of those problems. The irony was that every time the USSR put out a new plane it caused a scare in the West. Many times the Americans were able to get examples of these planes and found out that they were not such a threat and that U.S. designs were far ahead. That didn’t stop Washington from constantly claiming that it was falling behind in the arms race.

The best part of the book is the descriptions of the encounters during the Gulf War. The first Iraqi MiG-25 flight actually resulted in a victory with a U.S. Navy F-18 being shot down. After that however the Americans won every engagement. That led the Iraqis to constantly try to change tactics but none of them worked. The situation got to the point that Saddam lost faith in his air force and ordered a large chunk of it to be flown to Iran in the twisted idea that he would get them back after the war. In the end Iraq lost a dozen of its fighters to F-15s but the majority were in Iran never to return. It’s also interesting that despite the high number of kills the F-15s scored their weapons were unreliable. They used two main missiles one only hit 25% of the time and the other 50%. The Iraqi missiles did no better. The book also uses both Iraqi and American pilots’ recollections which is a big plus because many just focus upon the latter.

One of the drawbacks of the book is the plethora of military abbreviations and military jargon. There’s not even an appendix to look them up. You should just skim over them.

F-15C Eagle vs MiG-23/25 is one of the better releases in the Duel series. The problems with the Soviet jets are interesting. There’s lots of first-hand combat accounts and you get both sides of the war.