Violence Picks Up Again In Iraq In July 2021 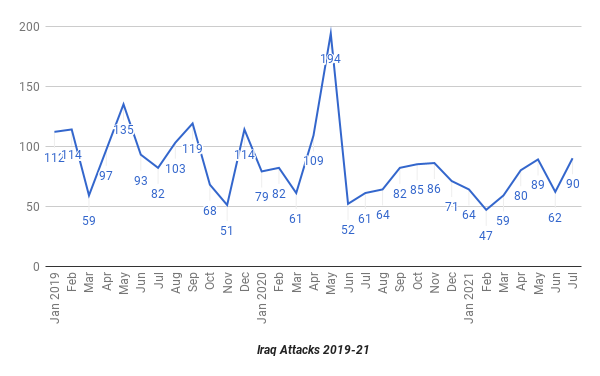 Violence increased in Iraq in July. The number of incidents by pro-Iran groups stayed the same between June and July. The uptick was due to the Islamic State who’s attacks went from 62 in June to 90 in July. That was the highest amount of monthly attacks since May 2020. This included more incidents in areas that have previously been quiet and a mass casualty bombing in Baghdad. 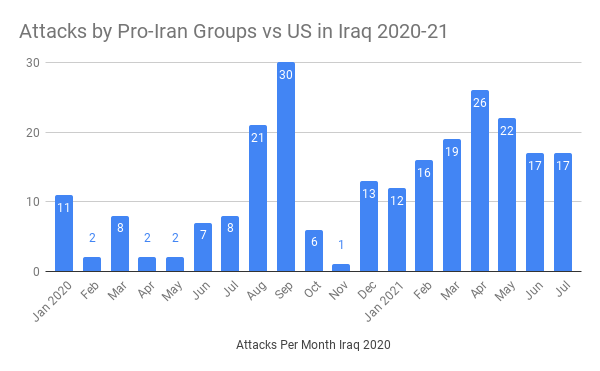 There were 17 attacks by Pro-Iran groups in July plus two failed incidents. Convoys carrying supplies for the U.S. were hit with bombs 13 times in Anbar (2), Babil (2), Baghdad (1), Basra (1), Dhi Qar (4), Diwaniya (2), and Salahaddin (1). A drone hit a military base in Irbil, and rockets were fired at Anbar’s Ain Al-Assad base twice, Baghdad’s Green Zone twice, and Irbil Airport. Rockets were also dismantled in Baghdad and drone was shot down over the Green Zone. Most of the attacks occurred during the first two weeks and the last week of the month. Two U.S. soldiers were wounded during one of the rocket attacks in Anbar. This was the same amount of incidents in June.

There were a total of 106 killed and 164 wounded in July. 3 Hashd al-Shaabi, 27 members of the Iraqi Security Forces (ISF), and 76 civilians died and 2 U.S. soldiers, 18 Hashd, 30 ISF and 114 civilians were injured. That was the highest amount of casualties for the year. It also showed that the militants were targeting civilians against in previous months members of the security forces had the most casualties. 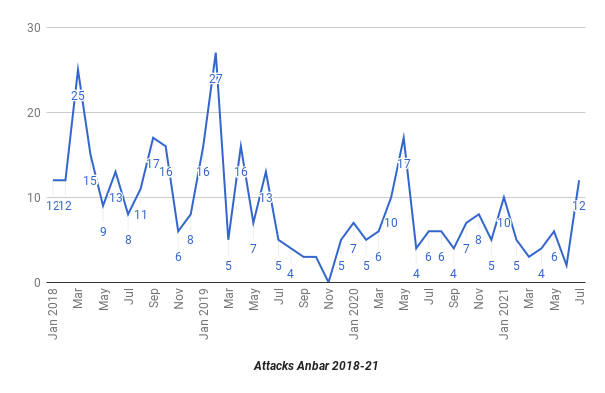 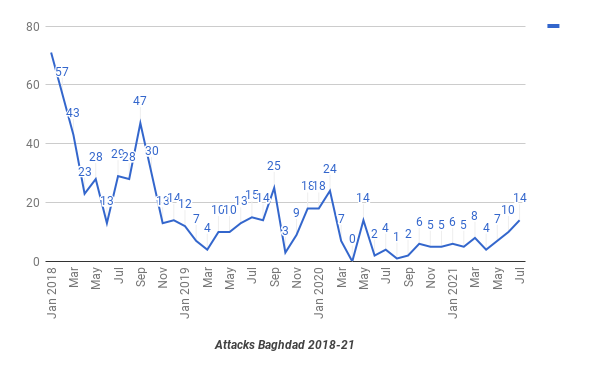 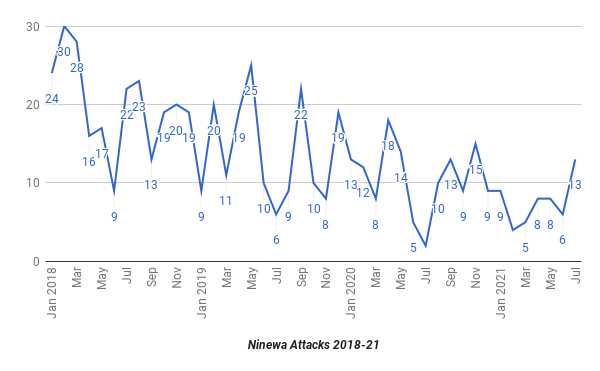 Security changed in Anbar, Baghdad and Ninewa in July. Anbar and Ninewa usually see single digit attacks because they are used for logistics instead of operations but in July they had 14 and 13 incidents respectively versus 2 and 6 in June. In Anbar a power tower was blown up and an ISF camp was attacked, while in Ninewa two power towers were bombed, IEDs were dismantled around two more, and a checkpoint was attacked. In the capital province the insurgents have reactivated its cell in Tarmiya in the northern section and are trying to infiltrate into the city proper once more. That resulted in a suicide bombing in Sadr City that left 35 dead and 59 wounded. The previous suicide attack in Baghdad was in January. 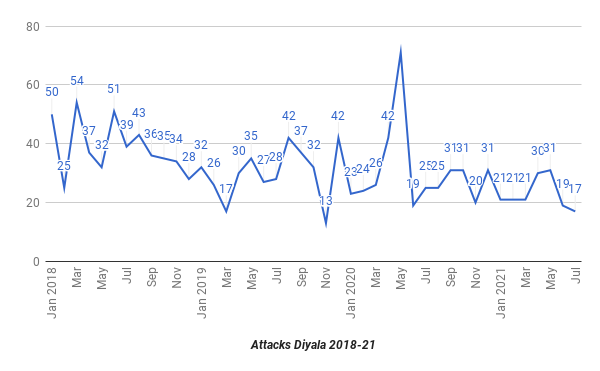 Diyala is the center of the insurgency in Iraq but violence has been going down there. Incidents went from 31 in May to 19 in June and 17 in July. As usual almost all the attacks were in the Muqdadiya district in the center and Khanaqin in the northeast where IS has de facto control of many rural areas. Most attacks are meant to keep locals and ISF out of those places. 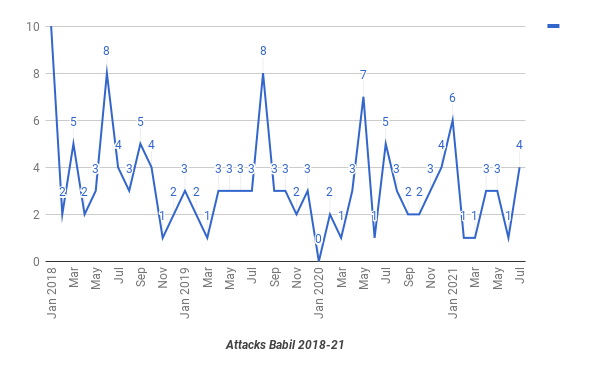 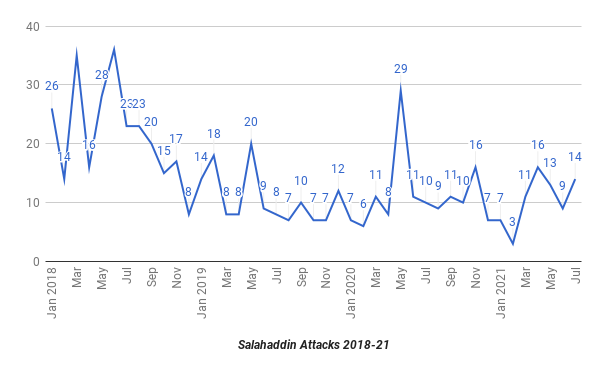 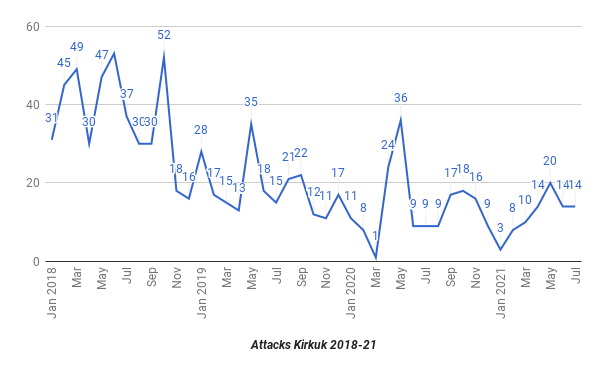 Babil and Salahaddin saw a jump in incidents, while they remained the same in Kirkuk. Attacks in Babil went from 1 in June to 4 in July. Three of those were in the Jurf al-Sakhr district in the northwest which is a Kataib Hezbollah base with army units around it and a favorite target of IS. There were 14 incidents in Salahaddin in July up from 9 in June. Power towers were a main target with three attempts and repair workers were bombed at another tower site. It’s also believed that IS shot down an army helicopter in the Amerli district in the east that left 5 soldiers dead. Kirkuk saw 14 incidents in June and July each. There were two bombings of power towers, a village and an army camp were attacked, the North Gas Company and two villages had rockets fired at them last month. Salahaddin and Kirkuk have well known IS camps yet violence constantly fluctuations up and down there. The insurgents appear to be more interested in rebuilding their cadres in the two governorates more than carrying out operations.

Iraq Newspaper, "A logistical support convoy belonging to the American coalition was targeted with an explosive device in Diwaniya, southern Iraq," 7/11/21

Al Monitor, "Militias launch spate of attacks on US positions in Iraq," 7/7/21

NINA, "2 Electricity Transmission Lines And 5 Towers Targeted With IEDs In Nineveh And Kirkuk," 7/3/21

- "2 Electricity Transmission Lines And 5 Towers Targeted With IEDs In Nineveh And Kirkuk," 7/3/21

- "A convoy of logistical support for the International Coalition forces was targeted with an explosive device in Babylon," 7/2/21

- "A force from the 25th Brigade in the Popular Mobilization thwarts an attempt to detonate the electric towers south of Nineveh," 7/4/21

- "Targeting a convoy of logistical support for the International Coalition forces in Salah al-Din," 7/2/21

- "A Convoy Of Logistical Support For The Int'l Coalition Targeted With An IED In Basra," 7/11/21

- "A bombing targets a logistical support convoy of the International Coalition on the outskirts of Baghdad," 7/4/21

- "A fuel tank driver was injured in two explosions, one of which targeted an international support convoy in southern Iraq," 7/29/21

- "Injuries among the ranks of the Iraqi army in an ISIS attack, southeast of Mosul," 7/4/21

- "Investigation results: The Iraqi helicopter was downed in an attack in Salahaddin," 7/31/21

Al Sumaria, "An explosive device targets a convoy of the International Coalition in Nasiriya," 7/15/21

- "Two attempts to blow up electric power towers in Ninewa and Diyala thwarted," 7/11/21