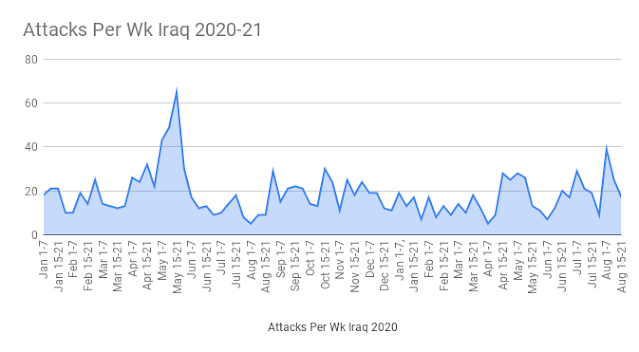 The Islamic State’s summer offensive appears to be coming to an end in August. On the other hand, pro-Iran groups are increasing their attacks upon U.S. targets in Iraq.

There were a total of 25 security incidents recorded in Iraq from August 15-21. That was down from 31 the previous week and 44 the first week of the month. 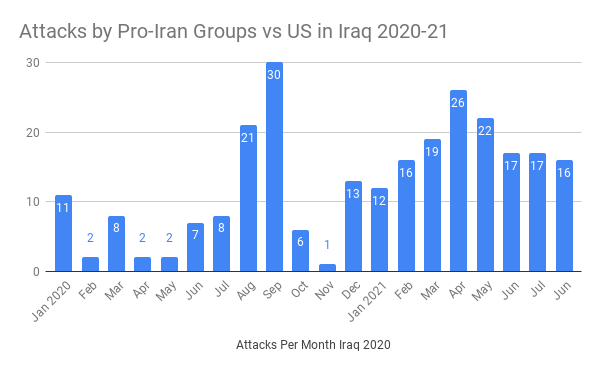 8 of those incidents were by pro-Iran groups. They hit logistics convoys working for the U.S. in Anbar (1), Baghdad (2), Dhi Qar (1), and Salahaddin (1). Three other IEDs were dismantled in Babil and two in Diwaniya. There have been a total of 16 successful attacks by these groups in August. In July there were 17. According to the United States Tehran has approved this uptick in assaults.

There were 17 incidents by the Islamic State during the week. Those were in Babil (1), Baghdad (1), Diyala (8), Irbil (1), Kirkuk (3), Ninewa (1), and Salahaddin (2). That was down from 25 the second week of August and 39 the first week. This could mean that IS’s summer offensive which started in July may be coming to an end. August saw some of the highest violence levels in a year.

IS caused 12 deaths and 18 wounded. 1 civilian, 3 members of the Iraqi Security Forces (ISF), and 8 Hashd al-Shaabi were killed along with 3 ISF, 4 civilians and 11 Hashd who were injured.

The main focus of the summer campaign was hitting Iraq’s power grid. During the week power towers were blown up in Babil and Kirkuk. These operations have knocked out electricity across the country during the summer heat.

The deadliest incident of the week happened in the Tarmiya district in northern Baghdad province. There the insurgents attacked a Hashd brigade headquarters killing 6 including the commander and wounded 6 others. This year IS re-activated its cell in the area and started carrying out weekly attacks. This was biggest one so far.

During the summer the militants had moved away from Diyala for other governorates but during the third week of August they returned. There were 8 incidents including a gun battle, a village being attacked and two checkpoints hit. Diyala is where IS is usually most active having de facto control of many rural areas in the center and northeast. Its operations are mostly aimed at driving off locals and the security forces from these areas so it can continue with its rebuilding.

Incidents in Kirkuk, Ninewa, Salahaddin have gone back to normal levels. There were three in Kirkuk including an oil well being bombed. There was an IED in the Mosul area, and two shootings in Salahaddin.

Finally, a village was attacked in the Makhmour district of southern Irbil. IS has been hitting this area ever week of August probing for gaps in security.

Al Hurra, "Dead and wounded from Al-Nujaba in an ISIS attack north of Baghdad," 8/21/21

NINA, "4 Soldiers Killed And Wounded In A Terrorist Attack Northeast Of Baquba," 8/17/21

- "An Act Of Sabotage Puts An Electric Power Transmission Line In Kirkuk Out Of Service," 8/16/21

- "An Attempt To Target The Logistical Support Convoys Of The Int'l Coalition Thwarted In Babylon," 8/19/21

- "The Commander Of The Popular Mobilization Regiment And an Affiliate Martyred And Others Wounded In An Armed Clash North Of Baghdad," 8/21/21

- "A Man Kidnapped Another Wounded In Two Separate Incidents In Diyala," 8/21/21

- "Two Convoys Of Logistical Support For The Int'l Coalition Targeted With Two IEDs In Dhi Qar and Salah al-Din," 8/17/21

- "Unidentified Gunmen Burn A Brick Factory And Attack A Military Patrol With An IED In Diyala," 8/19/21

- "A policeman was injured and a thermal camera destroyed in an ISIS attack in Salahaddin," 8/15/21

- "Unidentified persons attack a convoy of the International Coalition in Baghdad," 8/16/21

- "Within hours, the second attack hit a convoy of the international coalition in Iraq," 8/17/21