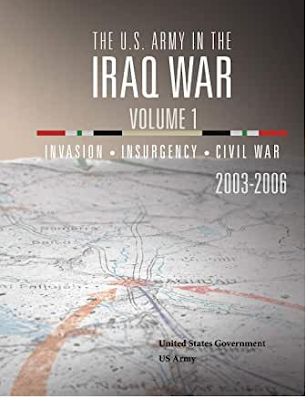 The 14th chapter of the U.S. Army history of the Iraq War covers the end of 2004. At that time the U.S. military was focused upon securing major cities including Fallujah to allow the January 2005 elections to take place. On the other hand, Abu Musab Al-Zarqawi was becoming the face of the insurgency while the first splits in the resistance were beginning to emerge.

In the winter of 2004 the new U.S. commander in Iraq General George Casey decided to clear seven cities of insurgents and militiamen to prepare for the January 2005 elections. The first operation was started by the Mahdi Army when they clashed with the new U.S. unit in Najaf at the start of August. The American response would lead to the second battle for the city. Things did not go as plan with three battalions of the new Iraqi National Guard disintegrating and a ceasefire being brokered by Ayatollah Ali al-Sistani which allowed Sadr’s militia to fight another day. The later operations in Tal Afar in September, Samarra in October and Fallujah in November went off much better in the short term. The cities were cleared but then the U.S. went onto the next area and the insurgents moved right back in. That was because the Americans did not have enough troops in Iraq to clear and hold any area in the country. This pattern would be repeated in the following years. The U.S. could temporarily improve security but it could never maintain it across the country.

During this period Zarqawi began asserting his power over the insurgency. He made Fallujah his main base and showed what he wanted for the country. He tried to enforce strict religious rules upon the city with religious police and started killing Shiite inhabitants. His men along with Ansar al-Islam were able to take control of Tal Afar in western Ninewa in the summer of 2004 which became an important way station with Syria where men and material were brought in. During the second Battle of Fallujah Zarqawi’s chief of operations Omar Hadid was killed who was also a rival within Tawhid Wal-Jihad. With Hadid out of the way Zarqawi was able to consolidate his control. This was one of the first indicators to the insurgency and the Americans what Zarqawi had planned for Iraq. He wanted to start a sectarian war between Sunnis and Shiites, impose his religious beliefs and insert himself as the head of the resistance. The Americans actually found out about some of this at the start of 2004 when it captured a letter between Zarqawi and Al Qaeda but made no changes. He was able to achieve many of his goals while the U.S. were floundering.

The differences within the insurgency were finally coming out in 2004. In Fallujah for instance, one insurgent leader Sheikh Abdullah Janabi clashed with Zarqawi to try to stop another battle for the city. The argument got to the point that Janabi called for the killing of Zarqawi’s emir in Fallujah. Then the two made up and collaborated to attack the local National Guard units. The Sunni militants had always been made up of a variety of groups with different goals from the return of the Baath Party to an Islamic revolution throughout the Middle East. They were only united by their opposition to the new order in Iraq. These were the first open splits between them which would continue into 2005. It would take until 2006 for the Americans to exploit these divisions.