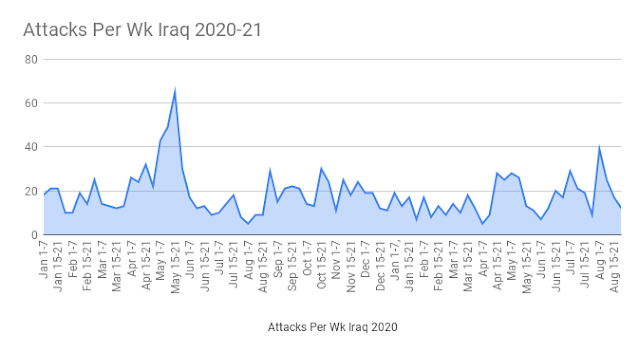 The Islamic State’s summer offensive in Iraq officially ended in August. At the same time pro-Iran groups are picking up their attacks during that same period.

There were a total of 21 security incidents recorded in Iraq from August 22-28. That was down from 25 the week before, 31 the second week of the month and 44 the first. The steady decline is because the Islamic State winded down its summer offensive during the month. 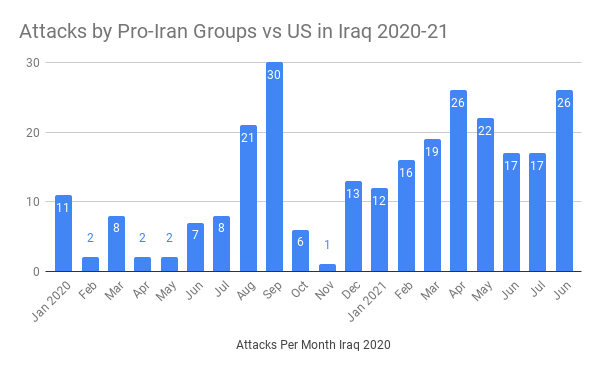 9 of those incidents were by pro-Iran groups. They carried out attacks across central and southern Iraq and an assault on Kuwait. Logistics convoys working for the U.S. were hit by IEDs in Babil (2), Baghdad (1), Basra (1), Dhi Qar (1), Diwaniya (2), and Muthanna (1). Seven of those attacks occurred on just one day, August 24. Rockets were also fired at the Basra-Kuwait border with at least a few landing in the neighboring country. This is not the first time pro-Tehran groups have attacked neighboring countries. The target was apparently a base where US troops are housed. These factions have been increasing their operations every week of August from 5 the first week, to 6 the second, 8 the third and then 9 the last. There have been a total of 26 incidents by these groups in August tied for the highest amount this year with April.

That left just 12 incidents by the Islamic State. Their incidents have been going in the other direction with 39 the first week, 25 the second, and 17 the third. That marked the end of the summer offensive which started in June.

Those left 8 dead made up of 4 members of the Iraqi Security Forces (ISF) and 4 civilians along with 10 wounded consisting of 8 ISF and 2 civilians. Salahaddin had almost all the casualties during the week with 14.

Incidents have been down in Diyala throughout August. There was just a  policeman killed by a sniper and an IED this week. This province is the center of the insurgency in Iraq, but the group has been going to other areas this month.

Southern Irbil has been one of those new IS targets during the month. A mortar was fired at a village and a checkpoint was attacked. The Makhmour district is a disputed area and the insurgents have been trying to exploit the gaps in security there between the ISF and Peshmerga.

There were three IEDs and a gun battle in Ninewa. Attacks there have gone up and down throughout the month. Usually there are few incidents there because it’s used for logistics by the militants.

The biggest incident of the week occurred in Salahaddin when a sniper killed 2 police and wounded 7 more at a checkpoint in Dhuluiya which is in the southeast along the Diyala border. There was another sniper incident and two IEDs as well. During the summer IS has been hitting Salahaddin more than usual.

Al Hurra, "Two Iraqi policemen were killed and wounded in an attack in Salahaddin," 8/29/21

Iraq Newspaper, "After the 12th and 22nd Brigades, violent clashes between the Popular Mobilization Forces, the 88th Brigade, led by Wanes al-Jabbara and the terrorist ISIS, and the killing of Brigadier General Mohammed Hamid," 8/23/21

- "Now, an attack by ISIS on the operation cutters of the 22nd Brigade of the Popular Mobilization Forces of the Shammar clan during operations in Tal Qusaiba in Ninewa Governorate," 8/23/21

NINA, "2 Convoys Of Logistical Support For The Int'l Coalition Targeted With Tow IEDs In Diwaniyah And Muthanna," 8/24/21

- "A hunter was killed and another one wounded when an explosive device exploded near Al-Tuz, south of Kirkuk," 8/22/21

- "Source: A Logistical Convoy Of The Int'l Coalition Forces Targeted In Basra," 8/27/21

- "Shooting between the Iraqi army and ISIS in the area separating Irbil and Ninewa," 8/26/21

Al Sumaria, "One civilian was killed and another wounded by an explosive device explosion in Salahaddin," 8/25/21