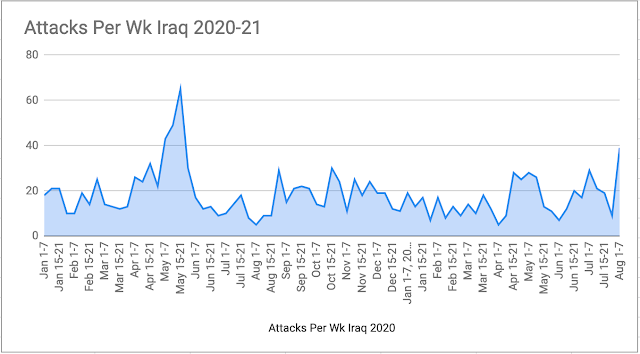 Violence spiked in Iraq during the first week of August 2021. There were the most security incidents since May 2020. That was due to the Islamic State’s continued campaign against the country’s electricity grid.

Security incidents in Iraq constantly go up and down and the first week of August was one of the former. There were a total of 44 incidents recorded in the country the highest figure of the year and the most since the third week of May 2020. 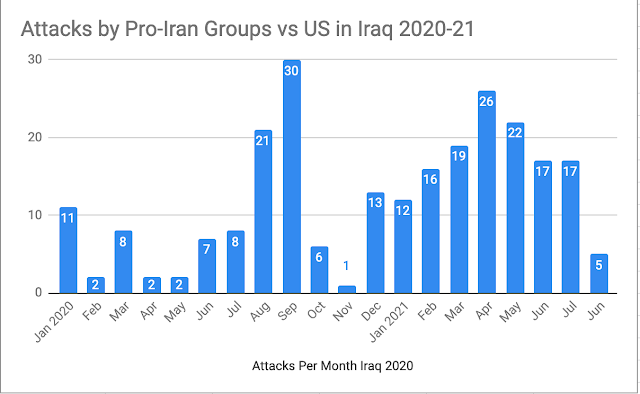 5 of those incidents were by pro-Iran groups. They hit five logistics convoys in Babil (2), Dhi Qar and Diwaniya (2). One of the attacks in Babil killed three Fijian contract workers. A recent report by the Inspector General for the U.S. Operation Inherent Resolve said that Iran had okayed an increased pace of attacks by these factions against American targets in Iraq. That started in December 2020. Incidents have been in the teens and twenties every month since.

All the incidents together left 12 dead and 19 wounded for the week. 1 Hashd al-Shaabi, 3 Fijians, 3 civilians, and 5 members of the Iraqi Security Forces (ISF) kill and 1 Hashd, 5 ISF and 13 civilians injured.

The main reason for the jump in attacks in August was IS’s campaign against the electrical grid. In Anbar four IEDs were dismantled around power towers in two different incidents both in Hit. A tower was blown up in northern Baghdad. Two more were destroyed in northern Diyala, and two more in Kirkuk in two separate attacks. Another bomb was discovered in Kirkuk. Finally in Salahaddin 14 towers were hit across two days. These are easy targets for the insurgents because they are usually in isolated areas with no protection. It also undermines the government during the hot summer a tactic the militants have used since 2003.

Anbar and Ninewa remain way stations for the Islamic State. Besides the two attempts on power towers in Anbar there was an infiltration attempt as well. The insurgents are constantly moving fighters and their families across from Syria to Iraq. In Ninewa there was an IED and mortar fire on a village. Because of their role as logistics hubs there are usually few attacks in either governorate.

Babil and Irbil are targets of opportunity. A Hashd commander was assassinated in the former and eight people were kidnapped in south Irbil and another 3 shot and wounded at a fake checkpoint.

IS is trying to pick up its operations in Baghdad. The power tower was bombed in Tarmiya in the norther where the militants have revived its cell. There was also a sticky bomb in central Baghdad that might have been done by the insurgents. Three police were also shot in the south. IS might also becoming active in that area of the province as well.

Insurgents have shifted their focus away from Diyala and towards Kirkuk and Salahaddin over the last few weeks. Diyala was regularly the most violent area of Iraq but There were only four incidents their at the start of August. There were 9 in Kirkuk in comparison. This included four attacks on checkpoints, a kidnapping, and the assaults on power towers. Salahaddin had 16 incidents, almost all of which were targeting electricity infrastructure.

Iraq Newspaper, "Iran targets an American convoy with two double bombings in Qadisiyah and a third in Babil, killing 3 from the Republic of Fiji," 8/1/21

- "Now a convoy of logistical support for the American occupation has been damaged with explosive devices in Nasiriya, near Al-Batha and the Qassim Al-Jabarin Brigade is adopting the operation," 8/4/21

- "An Attempt To Infiltrate Of Syrians Thwarted After Clashing With Them On Iraqi-Syrian Border," 8/1/21

- "A Civilian Killed And Another Wounded In An IED's Explosion West Of Mosul," 8/1/21

- "The Commander Of The 9th Brigade In The Popular Mobilization Forces, Martyred South Of Hilla," 8/2/21

- "A Lawyer Survives An Assassination Attempt And A Tribal Sheikh's House Attacked In Diyala," 8/2/21

- "A Number Of Electric Power Towers Fall Due To Sabotage Acts In Kirkuk," 8/5/21

- "A Real Estate Office Attacked By Gunmen In Khanaqin, Diyala, His Owner Injured," 8/6/21

- "Thwarting the bombing of an electricty power tower in Anbar," 8/6/21

- "A Village Southeast Of Mosul Subjected to Mortar Shelling," 8/5/21

- "In less than an hour, a second attack targets the international coalition in central Iraq," 8/5/21

- "The intelligence agency thwarted the bombing of two electric power towers in Anbar," 8/1/21

- "Pictures .. Exploding towers cut off electricity and water in areas in Baghdad and Salahaddin," 8/4/21

Sotaliraq, "3 police were wounded in an armed attack south of Baghdad," 8/6/21

- "Iraq..Darkness descends on Salahaddin after 14 electricity towers were targeted with explosive devices," 8/5/21

Al Sumaria, "Thwarting the bombing of one of the main power transmission towers in Kirkuk," 8/7/21