Review Iraq In World War I, From Ottoman Rule to British Conquest 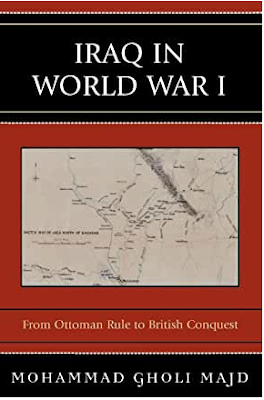 Iraq In World War I, From Ottoman Rule to British Conquest by Mohammad Gholi Majd is based upon primary sources. Namely U.S. diplomatic cables from Iraq as it was the only foreign delegation to stay in Baghdad during the entire war and the official British history of the Mesopotamian campaign. This turns out to be the major flaw of the book because it consists of one long quote from a document after another. There is very little original writing by Majd, absolutely no analysis and provides nothing from the Ottoman’s side. There’s not even a conclusion. The author also couldn’t say no to any paper that he liked which means there are all kinds of tangents included that could have been cut out. On the good side it does provide reasons why England invaded Mesopotamia and the day to day battles during the war. Those are overshadowed by its faults however.

A strong part of the book is that it gives some reasons why England invaded Mesopotamia in 1914. Two major factors were that London believed that Turkish rule was crumbling based upon its inability to consistently collect taxes and constant tribal revolts. There was also the belief that the people of Mesopotamia cared little for the Ottomans and were largely pro-British. This would be a claim that would constantly be brought up during the first year of the war. German influence was also increasing with things like building railways through Iraq. Finally, London was producing oil in Persia and believed that the Ottomans would threaten that if war broke out. Majd includes diplomatic cables from the Americans that disagreed with many of these premises. For instance, the U.S. thought that the Ottomans were very good at playing divide and conquer with the sheikhs of the provinces. It also recorded strong anti-British sentiments among the population. It noted that Germany’s ties to Istanbul were growing because London refused to help the Turks with things like transportation. The Americans proved to be more attuned to the situation than the English. That would lead to many problems during World War I.

Majd also outlines how the British planned to invade Basra province months before the war started and how its goals constantly expanded afterward. Iraq In World War I includes a paper by the British admiralty from August 2014 that ordered sending two ships to the Shatt al-Arab waterway that emptied into the Persian Gulf to protect its oil interests in Persia. By October on the eve of the war part of the 6th Division in India was preparing to seize southern Basra from the Turks. That meant when London declared war on the Ottomans on November 5, 1914 its forces landed in Basra the next day. From then on the English constantly seized more and more territory claiming that was necessary to protect what it already held. By the end of the war London wanted as much territory as they could seize and even took the city of Mosul after the armistice. This was a classic example of mission creep. What was supposed to be just the protection of oil fields in southern Persia concluded with seizing three Ottoman provinces which became the country of Iraq. The British would rule it directly and then have hegemony over the new country for the next forty years.

One can find plenty of parallels between the British campaign in Iraq and the American one although the author never mentions them. Both countries felt like the war would be easy and over quickly which proved untrue. The leadership of the two nations were convinced that the public didn’t like the regimes they were living under and thus must be pro-Westerner when they were far more opposed to foreigners. The British and Americans called themselves liberators rather occupiers but became the latter. Both countries relied upon best case scenarios and flawed assumptions which would undermine their plans. These would have all been good points to bring up in a conclusion but the book doesn’t have one.

The negatives of Iraq In World War I outweigh the positives. For one, it gets lost in the details. 95% of the book is one long excerpt after another with Majd’s original writing mostly being transitions such as “He said…” or “Another dispatch noted …” That also means there is no analysis at all. What did it mean for the British to have one of their largest defeats in the war in Iraq? Who knows because Majd doesn’t give his opinion. As stated above, there’s not even a conclusion chapter where he sums everything up and gives his ideas on the war. Instead, it ends with reports on a cholera epidemic that broke out in Baghdad after the war. There are also all kinds of meaningless events included such as U.S. dispatches on how Germany warned neutral shipping that it would be stopped if it tried to deliver supplies to England? What does that have to do with the Mesopotamian campaign? Your guess is as good as mine. Majd never discusses what the Ottomans thought of the war. That’s a huge gap in the history because it only has Western accounts. On the other hand, given the author’s love of quotations including the Turks might have doubled the size of the tome.

If you want to read documents on British plans for the Mesopotamian campaign and specific battles than Majd’s book is a good source for that. If you’re looking for the meaning of the war and a cohesive narrative you should look elsewhere. In the end, it’s really amazing that this book could get published with so little writing by the author. That makes Iraq In World War I read more like Majd’s notes he took while doing his research rather than his finished product.