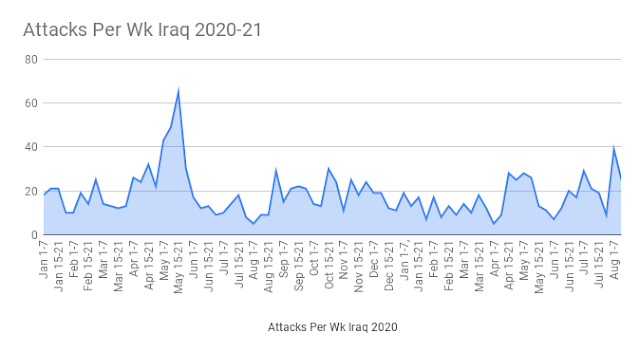 The Islamic States appears to be in a second phase of a summer offensive while pro-Iran groups continue their steady pace of attacks upon U.S. targets in Iraq in August 2021.

There were a total of 31 security incidents reported in Iraq from August 8-14. That was down from 44 the week before which was the highest weekly total for 2021. 31 was still a large number of incidents as well. 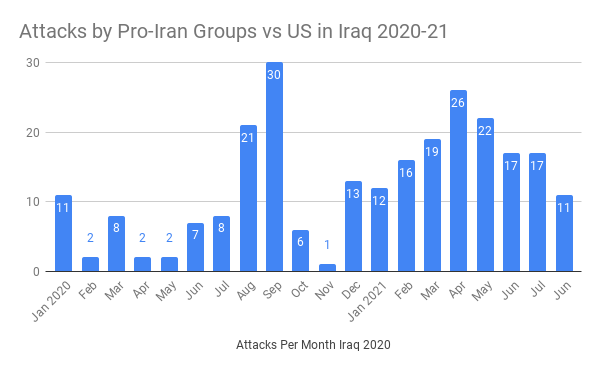 6 of those attacks were by pro-Iran factions. They hit logistical convoys working for the U.S. in Dhi Qar (1), Baghdad (1) Diwaniya (1) and Babil (3). There have been a total of 11 incidents by those groups this month. According to a recent U.S. government report Iran has sanctioned these attacks.

The Islamic State looks like it is in the middle of a summer offensive. That started in June when attacks began to rise. Then there was a dip at the end of July but they have since shot up again to some of the highest weekly figures of 2021.

A total of 17 people died and 23 were wounded as a result. 2 Hashd al-Shaabi, 5 civilians and 10 members of the Iraqi Security Forces (ISF) lost their lives and another 3 Hashd, 8 civilians and 12 ISF were injured. Salahaddin had the most casualties at 23, the only province in double digits.

Part of IS’s on going offensive is to hit Iraq’s electricity network. Power towers were struck in Baghdad, Kirkuk, Ninewa twice, and Salahaddin twice with bombs and mortars. An IED was also dismantled in Salahaddin aimed at the power grid. This is meant to undermine the government during the summer heat. It’s working as power was knocked out across western Baghdad due to one of these attacks.

The insurgents are also moving away from Diyala which is the center of their operations and usually the most violent area of Iraq for Kirkuk and Salahaddin. Kirkuk saw 9 incidents the first week of the month and three the second. That included two villages attacked. Incidents in Salahaddin went from 16 to 9 during that same period. The biggest incident was actually an accident when the security forces found a truck bomb and tried moving it when it exploded. 6 ISF were killed and 11 wounded as a result. Kirkuk and Salahaddin both have major IS bases but violence tends to ebb and flow there. Now it appears that militants are flexing their muscles a bit there during this new campaign.

- "IS Executes a Civilian, Kidnaps Another in Disputed Kurdish Areas," 8/9/21

Iraq Newspaper, "From them The terrorists ISIS claims responsibility for the bombing of an electricity tower in Jalam Al-Dour, north of Baghdad," 8/11/21

- "A convoy of logistical support for the international coalition forces was targeted with an explosive device in Babylon," 8/8/21

- "A convoy of logistical support for the international coalition forces targeted with an IED In Babylon," 8/10/21

- "An attempt to blow up a power transmission tower in the Amerli district, south of Kirkuk, was thwarted," 8/9/21

- "ISIS claims responsibility for the assassination of Mukhtar in Salah al-Din," 8/13/21

- "Three members of the tribal mobilization were killed and wounded in an armed attack southeast of Mosul," 8/9/21

- "Two Children Injured In A Detonator Explosion Left Behind By ISIS South of Mosul," 8/12/21

Shafaq News, "A child was killed and two others injured in an explosion in western Anbar," 8/14/21

- "The second attack within hours..a bomb exploded on a coalition convoy in central Iraq," 8/13/21

- "A terrorist attack causes casualties among members of the crowd in Salahaddin," 8/12/21

- "Two Iraqi soldiers were killed in a thwarted suicide attack on the Husseiniya procession in Baghdad," 8/9/21

Al Sumaria, "An explosive device targeting one of the electric power towers north of Baghdad," 8/2/21