Casualties and security incidents reached the lowest monthly totals of 2017 in July due to the end of the Mosul campaign. Before, the battle for the city was driving violence across the country. Now they will be heading downwards until the next offensive begins.


There were 477 incidents reported in the media in July 2017. That was the lowest monthly total for the year. The year started at 712 incidents in January, then 620 in February, 716 in March, 569 in April, 522 in May, and 533 in June. The vast majority of incidents have been in Ninewa province due to Mosul. Now that the battle for the city has concluded violence is going down. 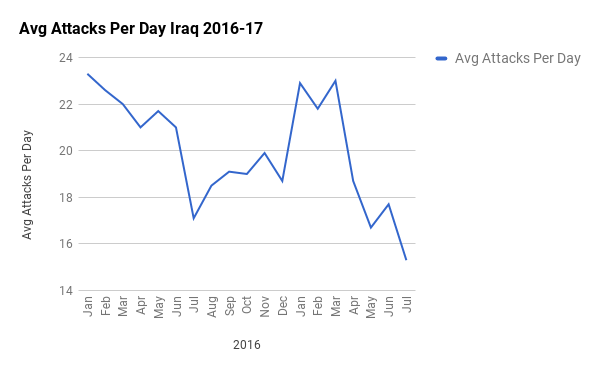 By province, there were 202 incidents in Ninewa, 103 in Baghdad, 43 in Salahaddin, 42 in Diyala, 33 in Anbar, 28 in Kirkuk, 12 in Babil, 5 in Basra, 3 in Kurdistan, 2 in Dohuk, 2 in Karbala, 1 in Muthanna, and 1 in Sulaymaniya. In Sulaymaniya an imam from the Kurdistan Islamic Group was shot and killed. A sticky bomb went off in Samawa, Muthanna with no casualties. The western desert of Karbala saw two attacks by the Islamic State. First, rockets were fired, and then eight suicide bombers were killed. These both originated from Anbar. Dohuk experienced Turkish air strikes and shelling targeting the Kurdistan Workers’ Party (PKK). Likewise, northeast Kurdistan was hit by the Turks twice, and Iranians aiming at their Kurdish opposition. Outside of tribal fighting there has been a rash of shootings of civilians in Basra. Babil, Kirkuk, Anbar, Diyala, Salahaddin, Baghdad and Ninewa are the seven main provinces beset by fighting IS and terrorism.

IS still holds western Anbar along the Syrian border, but violence there has been relatively low for the last year. Since October 2016 there has only been an average of one incident per day. That compared to the first half of 2016 when there were around 3 per day. Despite the low numbers, the Islamic State attempted a mass casualty bombing every week. The first week of July there were four suicide bombers, three of which were killed. The second week had 11 suicide bombers, six who hit their target, and 5 that were shot beforehand. The third week had nine suicide bombers, one successful, and a car bomb was destroyed. The fourth week saw seven suicide bombers, six killed, and five car bombs were dismantled. The last three days of the month had 1 suicide car bomb, and four car bombs were destroyed. Those accounted for the high casualties of 75 fatalities and 63 injured, despite just one attack per day. 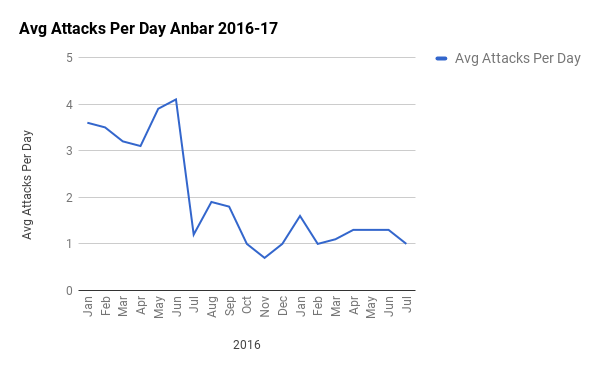 Terrorism has returned to Babil. For months, there were barely any incidents, but that has changed recently. In July, there were 12 attacks leading to 24 dead and 13 wounded, including one suicide motorcycle bomber being killed, and two car bombs destroyed. Just as important almost all of these attacks were occurring in the Jurf al-Nahda-Musayib area in the northeast that used to be the militants’ base in the governorate.

Baghdad continued to see some of the lowest violence since 2003-2004. Starting in April there have been roughly three incidents per day. That compared to most of 2016 when there were anywhere from 12-8 incidents. The Islamic State is still launching most of its attacks from the rural towns to the south and north of the city. There are still occasionally mass casualty bombings, but few are successful. During the month, there were six suicide bombers, only one of which was able to detonate his device, and five car bombs, four of which were destroyed or dismantled. 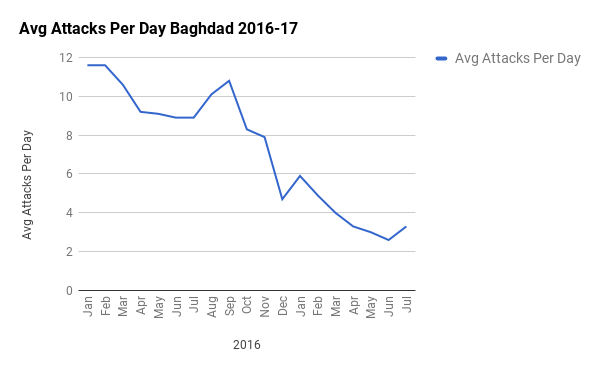 Diyala has witnessed the greatest increase in insurgent activity in recent months. Monthly incidents continued to go up and down, but in June, there were an average of two per day, matching the highest mark of 2016, before going down to 1.3 in July. Most attacks are low level shootings, 15 total, or IEDs, 24. But there are larger attacks such as four successful suicide bombers. IS has strongholds throughout the rural and mountainous regions of the province. These are usually isolated or contain lots of small towns, palm groves and rivers that allow the militants to avoid the security, give them cover from aircraft, and provide them access and transportation to the surrounding provinces. The security forces, which are controlled by Badr, carry out continuous sweeps in Diyala, but have not had any discernable effect. 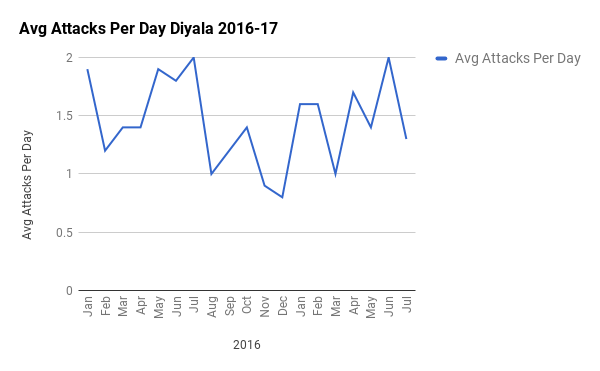 While there were occasional attacks upon the Peshmerga, the majority of incidents in Kirkuk were against people attempting to flee the IS controlled Hawija district. These displaced routinely run into IEDs or are shot at by the insurgents. Otherwise there has been less than one incident per day since December 2016. Hawija however, is the source for IS cells moving out to the surrounding provinces of Diyala and Salahaddin. 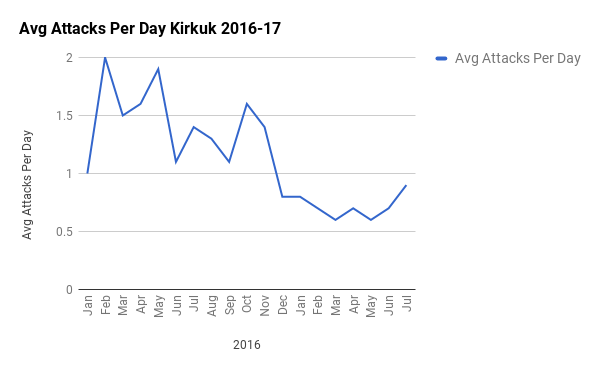 The Mosul battle finally concluded in July 2017. Almost all of the 202 incidents occurred in the city, although IS seized the town of Imam al-Gharbi for two weeks, and carried out occasional hit and run attacks in the liberated areas of Ninewa. Based upon the latest reports, a new total for casualties in Mosul was calculated. According to the media, human rights and United Nations reports, and Airwars, a total of 14,669 people died, and 20,614 were injured. Civilians were by far the largest victims with 13,192 dead versus 14 Hashd and 1,463 ISF, and 15,928 injured compared to 1 Coalition soldier, 16 Hashd, and 4,669 ISF. The Islamic State reportedly executed 3,078 people, while Coalition and Iraqi artillery and air strikes were blamed for 4,911 deaths and 3,705 injured. 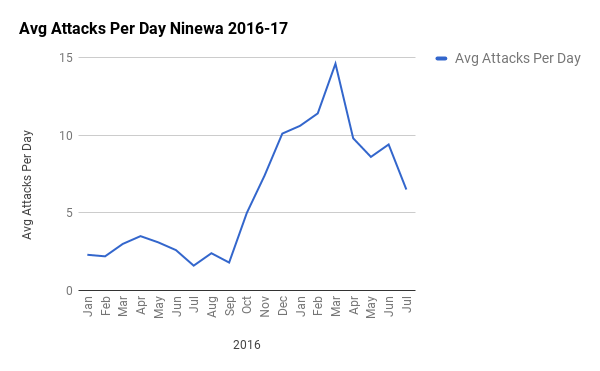 Salahaddin is the other province where IS is re-grouping, but security remains stable. Since February 2017 there has only been an average of around one incident per day. There are several mass casualty bombing attacks per month. In July, there were nine car bombs, seven destroyed, and 16 suicide bombers, only four were successful. Most incident however were attacks in the Makhoul Mountains in the northeast or shootings in and around Tikrit and Samarra. 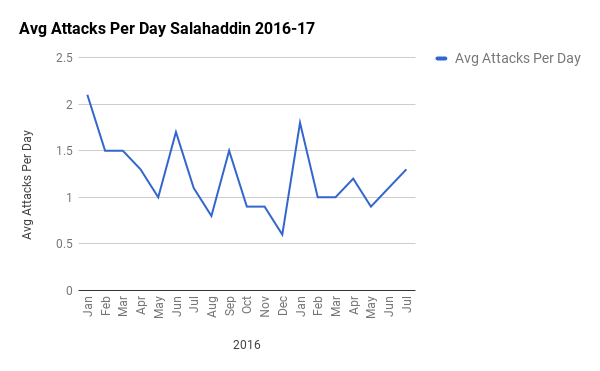 Al Forat, "Urgent picture .. Explosion of a sticky bomb and damage to two vehicles in Muthanna," 7/21/17

Shafaaq News, "Turkey army announced the killing of three members of the Kurdistan Workers' Party in bombardment targeting them in Kurdistan," 7/31/17