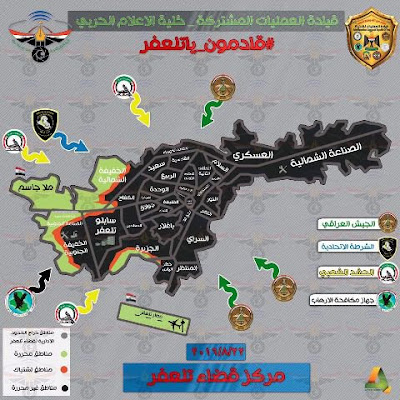 The Iraqi forces (ISF) have changed their tactics for the Tal Afar operation and charged right towards the center of the town. The army’s 9th Division and the Hashd breached Tal Afar in the northeast and southeast entering the al-Askari and Khadra neighborhoods. The Rapid Reaction units and Hashd freed Kifa in the northwest. The Hashd also took Nour and Tarmi. Instead of meticulously moving towards Tal Afar and clearing all the areas before taking on Tal Afar itself, they struck right for the town. In just three days they reached it. Another difference is the role of the Hashd. As the operation started the government said it would be like the Mosul battle with only the army and police entering Tal Afar, while the Hashd would remain on the outside. The speed with which the forces reached the town however has meant various Hashd are now inside. Badr for example, claimed it took an area.


Other elements of the attacking force were still on the perimeter. 7 villages were cleared in the process, along with an oil refinery in Kisk. These forces will likely penetrate Tal Afar soon as well, while others hold the outskirts.

The Coalition were providing support. The French were moving their artillery from around Mosul to the Tal Afar district. U.S. advisers were seen advancing forward with Iraqi army units. The Associated Press photographed members of the 82nd Airborne and Belgium Special Forces providing aerial surveillance with drones and over watch support with anti-tank missiles on the first day of the campaign. The U.S. is also operating out of an Iraqi base nearby. This is the same type of assistance they provided in Mosul.

The Coalition presence reportedly led several pro-Iran Hashd groups to leave. It was said that Kataib Hezbollah, Asaib Ahl Al-Haq, and the Nusab and Khorasani Brigades all departed complaining that Americans were on the ground and refused to work with them. This would be surprising if true. These groups have talked for months about taking the town. They see themselves as the protectors of the local Shiite Turkmen, and would like to control Tal Afar afterward because it has such a history as an important base for the Islamic State. If they did leave they could easily come back during or after the battle.

Iraq planes dropped leaflets over Tal Afar for the second time. They told people to stay away from Islamic State positions and called for the insurgents to surrender. This has become a common practice of the Iraqi air force to inform people still living under IS control that their liberation is coming.

For the last month people have been fleeing Tal Afar. That started when the bombing began. Now that the fighting has started the numbers have increased. The International Organization for Migration reported that 3,200 fled from August 18-22. They are being sent to the camps south and east of Mosul. The United Nations has been concerned about the distances they have to travel to safety, especially with the summer heat, but there is no real alternative.

Al Aalem, “Source: the sudden withdrawal of some Brigades and Kataib Hezbollah from the Tal Afar battle and the reason why,” 8/22/17

Iraq News Network, “Sadiqun: the withdrawal of the Kataib Hezbollah, Nusab and Khorasani Brigades from the Tal Afar liberation battle,” 8/22/17