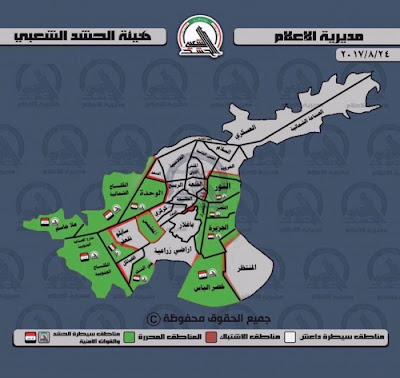 The Iraqi forces (ISF) continued three major thrusts into Tal Afar, which have nearly cut the town into thirds. The army, Golden Division and Hashd took Nour, Wahda, Kifa, the industrial district, the Education Directorate, and Jazira, which the Iraqi forces claimed they took on August 22. The Islamic State was said to be herding people with them as they retreated east. Ninewa Councilman Abdul Rahman al-Wakaa told the press that nearly 50% of the town had been taken. Joint Operations spokesman General Yahya Rasool added that over 300 IS fighters had been killed so far. The ISF coming from the south have nearly cut the town in half. The northwest and southeast fronts have linked up and are moving towards the center. The Iraqis’ strategy has been to charge towards the heart of Tal Afar as quickly as possible. At this rate, the Iraqis could finish off the battle in just a few more days.


There was still some controversy over whether several pro-Iran Hashd units withdrew from the offensive or not. Asaib Ahl al-Haq, Kataib Hezbollah and the Khorasani Brigades reportedly pulled out of the operation because they objected to the U.S led Coalition’s presence. The Joint Operations Command then issued a statement saying that didn’t happen. That was then pulled from the Command’s website however. These groups have coveted Tal Afar for months now. It would be surprising if they didn’t want to stay in the fight.

Al Ghad Press, “War Media Cell: the liberation of Wahda in Tal Afar and the continued fighting in Rubaee,” 8/24/17

Al Mada, “Conflicts over the withdrawal of parts of the crowd from the Tal Afar battle,” 8/24/17