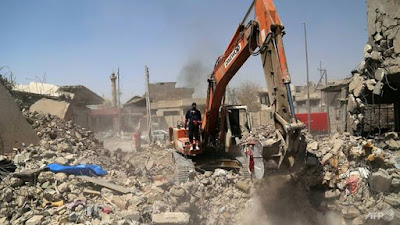 There are still Islamic State elements throughout Ninewa. In Mosul, three female IS members were arrested in Zuhur in the east. The security forces claimed they were spies. In Qayara, to the southeast of the city, the insurgents killed a member of the security forces and wounded another in a shooting. Finally, IS attacked two villages in the Tal Afar district, but were turned back by the Hashd. The Islamic State is obviously attempting to recover from their recent defeat in Mosul. That has led to sporadic incidents in Ninewa. While these have been largely ineffective, they do show that the militants have access to nearly every part of the governorate.


The Iraqi forces are still waiting for the go ahead against Tal Afar. National Security Adviser Falah Fayad was the latest to predict that it would be a short battle. He joined Ninewa Operations Command head General Najm al-Jabouri who similarly thought it would be a quick fight because IS was a broken force. The district has been surrounded by the Hashd for months now. That also gave plenty of time for any IS fighters or leadership that wanted to get out to leave. Contrary to what Jabouri said the insurgents have not lost their will to fight, yet Fayad and Jabouri are probably correct that Tal Afar will not last long because there are few fighters left there.

A source in parliament said that Prime Minister Haider Abadi was going to appoint General Abdul Amir al-Shammari to head security in Ninewa. A new Western Ninewa Operations Command was also likely to be formed. The security file in Ninewa has been chaotic for months now with too many units operating without any kind of direction. If Shammari were put in charge of everything in the governorate that might be an initial step towards bringing order to the situation. If however, he is just to head a new command that will only be adding to the problems with another organization working with all the others that already lack coordination.

The U.S. State Department has contracted the Janus Global Operations company to demine Mosul. This company has already worked in Ramadi and done training in Irbil. Observers believe it will take a year or more to remove all of the unexploded ordinance in the city. They are not only a security risk, but they are delaying the return of people to Mosul.

Even though the Mosul battle is over the number of displaced (IDPs) continued to go up. There were 838,044 IDPs on August 2, up from 837,450 on July 30. From July 28-30 more people departed camps than arrived. 185 families came into camps around Mosul, while 254 left. The summer heat was a main motivation for people wanting out of the camps. The United Nations interviewed 25 families who registered to leave. 12 said they would rent a place or stay with relatives in east Mosul because their houses were destroyed in the west or they were unable to return to their homes or IS still controlled their areas. Niqash talked with three IDPs who were living in southern Iraq. The first two did not want to go back to their homes because they were afraid of violence, their homes were wrecked, there were no services in Mosul, and they felt there were more opportunities where they currently lived. The third person was a Turkmen from Tal Afar who wanted to return, but couldn’t because IS still ran his town. Many of the IDPs going to Mosul head for the east, but don’t live there. That section of the city is safe, there’s housing available, and some work. Many people have wanted out of the camps for some time, because their freedom of movement is restricted. Add to that the lack of air conditioning during the summer, and there is another incentive to make people leave. Still, the continued stories of IS activities and the destruction in the west is leading many people to stay where they are.

Iraq continues to receive donations to help rebuild. France pledged $980,600 to the United Nations’ Development Programme to help with Ninewa. Luxembourg said it would contribute 500,000 Euros to help remove explosive from Mosul. That adds to the $117 million from Germany, $269 million from the United States, and $12 million from China. That’s roughly $399 million in four weeks since Mosul was freed. That’s a respectable start, but so much more will be needed.

Finally, Ninewa’s Governor Noufal a-Akub attacked his critics. He denied that he has been involved in any corruption and blamed his opponents for playing partisan politics. The governor is in a precarious situation as he has been expelled from the ruling coalition, and is heading for questioning by the provincial council so that they can move to dismiss him. This is what the local politicians are focusing upon, while the pressing issues should be rebuilding and ending the displacement crisis. Many other governorates that have recently been liberated are going through the same turmoil.

Ensor, Josie, “’Watching the torture of prisoners and bodies of Isil members floating down the Tigris’: What it’s really like to cover the war against Isil in Iraq,” Telegraph, 8/3/17

Al Ghad Press, “Head of the popular crowd: Tal Afar battle will be decisive and quick,” 8/3/17
- "The popular crowd repulsed a resounding attack on two villages in Tal Afar," 8/3/17

Iraq Newspaper, "Iraq Newspaper Reporter: Killing Of A National Security Guard And The Loss Of Another In Qayara," 8/3/17

Al Maalomah, “Governor of Ninewa: All those who accuse me of corruption were lying to me during my administration,” 8/3/17

Al Mada, “Washington tells US firm to clear mines and explosives from Mosul,” 8/3/17

Sotaliraq, “Member of the Ninewa Council: Akub faction of the National Renaissance Coalition,” 7/14/17

Sparks, John, “Families return to booby trapped homes after IS driven out of Mosul,” Sky News, 8/2/17