Displacement Crisis In Iraq, When Will People Go Home?


The International Organization for Migration (IOM) recently released two reports detailing the continued displacement crisis in Iraq. The IOM is the major organization dealing with this issue in conjunction with the United Nations and the Iraqi government. Since the end of 2016, thousands of people started returning to their homes. Those remaining however, are facing a series of difficulties that may keep them from going back for the foreseeable future.

The ebb and flow in fighting to liberate the country from the Islamic State shaped the displacement patterns in Iraq. From July 2015 to July 2016 for instance, there were 3,369,252 displaced (IDPs), while only 796,758 returned. From August 2016 to October 2017 the number of displaced went down to 3,174, 270, and the number of returns jumped to 2,331,678. There was a huge increase in the amount of people that fled, but that turned out to be temporary. The more areas were freed from the Islamic State, the greater number of people were willing to travel back. Roughly 90% of the remaining 3.1 million people still living without homes say they want to go back, but feel like they can’t do so right now. Those issues vary from province to province.

Displaced And Returns By Province 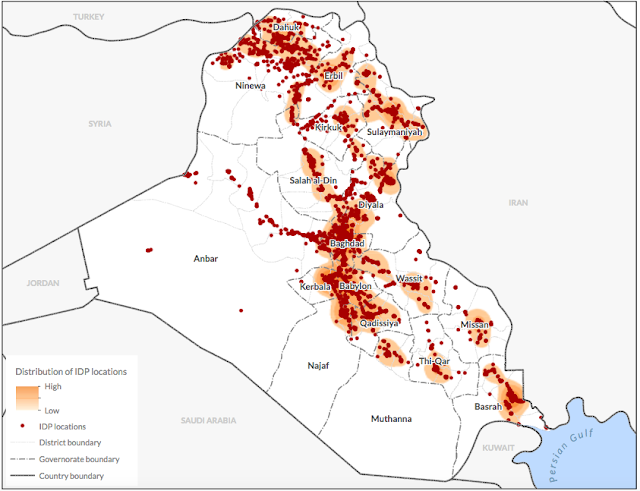 Location of Displaced in Iraq (IOM) 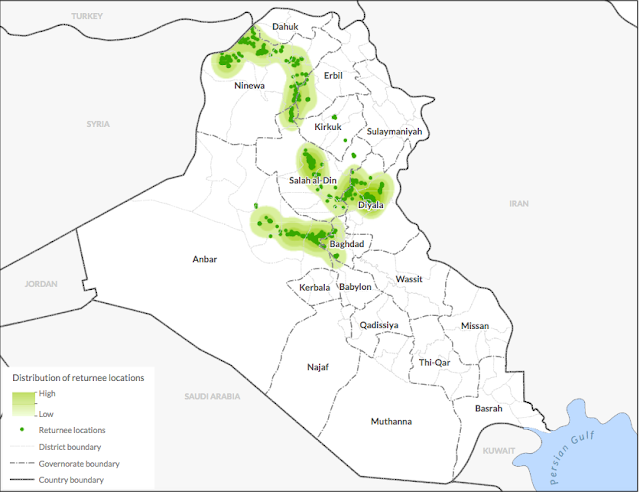 Location of Returns in Iraq (IOM)

The vast majority of the IDPs in Anbar have returned, but those remaining are deterred by the destruction of homes and infrastructure. There were 66,882 displaced, while 777,900 had gone home. Most had fled in 2015 and then headed back in 2016 and 2017 when there were roughly 450,000 and 770,000 returns respectively. This coincided with the center of the province being liberated, namely the towns of Fallujah, Ramadi and Hit. The major reason why people remain IDPs is because of property destruction and the lack of services. In Fallujah, 99% of respondents in a survey said their residents had moderate to severe damage. It was 100% for those polled from Hit and Ramadi. Over 80% said the electricity networks were destroyed or inefficient, and 64% of those from Fallujah, 49% from Hit and 49% from Ramadi claimed the water systems were in ill repair as well. Security was not a concern for the displaced, but the feeling that they had nothing to go back to was the main deterrent for doing so.

Baghdad is the home to displaced from within the province as well as from Anbar and Ninewa. Many people from Anbar came in 2014-15 fleeing IS, and half of those had gone home by 2017. That still left 304,560 IDPs in the governorate. Their major concerns were violence and mistrust. The IOM found that people feared terrorist attacks and kidnappings, and there was a general feeling of favoritism for certain groups and many believed they were threatened. In Abu Ghraib and Mahmudiya in the south the water and electricity systems were also destroyed.

Diyala is another place where large numbers of people made the trip back. 202,110 had returned, leaving 61,374 still displaced. The largest concentration of the latter was in Baquba the provincial capital. IDPs said that security was good and there was little tension or conflict going on. What they were concerned about was the war damage. Homes needed repair or were destroyed in all areas of the governorate, and basic services like water and electricity were wrecked or barely working for half of the IDPs and people that had gone back.

Security is the main reason why so few had made the trip back to their homes in Kirkuk. There are 256,176 IDPs versus just 2,964 returns. The tense security situation was cited by displaced as the reason why they had not returned so far.

The remaining displaced in Ninewa were worried about on-going violence and war damage. 267,690 people had gone back, and there 192,366 still without homes. The fighting left heavy property damage, especially in the Mosul and Sinjar districts. 40% of people also complained that there was a lack of water and electricity. IS was still active in Ninewa as well.

The war led to heavy displacement in Salahaddin, which is on-going. Salahaddin was the only province that had an increase in the number of people fleeing. That was due to the IS presence in Shirqat in the north and in nearby Hawija in Kirkuk that were two of the last places freed. The governorate also received people from Ninewa. The combination of poor security and destruction were maintaining the high number of displaced at 325,890. For example, in Dour, Faris, Baiji, Samarra, and Tikrit people reported 20-50% significant to total damage to their homes.

In Babil there have been no returns due to the authorities. In the Musayib district for instance, 90% said the security forces blocked them going home. Very few people, only 7%, said they wanted to return as well.

What the IOM reports bring up is that a huge number of people may remain displaced for quite some time. Property damage for example is a main concern, but there has been little to no government assistance with that. In fact, Baghdad has no strategy whatsoever for reconstructing the country. That has left rebuilding to the provinces, aid groups such as the United Nations, and individuals. In cities, they have worked hard to restore basic services, but in rural areas hardly anything has been done. There are intractable issues as well such as the fact that a large number of people have been banned from their homes due to being associated with the Islamic State. On the other hand, with the last areas of Iraq liberated from the militants hopefully security and the job situation will improve leading to a decline in the number of IDPs. Still, after the end of the sectarian civil war roughly 1.5 million people never returned. That’s likely to happen again this time around.