Review The Road to Iraq, The Making of a Neoconservative War 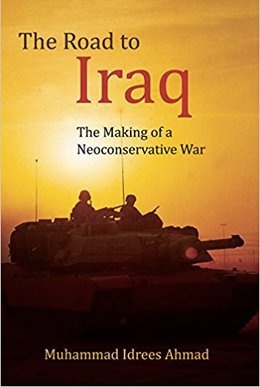 
First, the positive is the description of the neoconservative movement, its origins, its history, and the influence it was able to exert within the Bush administration. The term neoconservatives often gets bandied about when describing the factors that led to the 2003 Iraq war. Unfortunately, few understand it and often throw in many officials such as Vice President Dick Cheney and Secretary of Defense Donald Rumsfeld who were not part of the group. Ahmad traces their start to the 1930s when a group of Jewish leftist intellectuals converged in New York City. They eventually turned on the Left and moved towards the Right and the Republican party due to the upheaval caused by the Vietnam War, which they were afraid would lead the United States to give up its leadership in the world, become more isolationist, and refrain from the use of force. They eventually focused around seven main principles. One, they looked at the Holocaust as a pivotal point in history, which could be used to contrast with present times. Two, they promoted the use of military force. Three, they believed in American exceptionalism. Four, they argued for traditional values and the benefits of capitalism. Five, they believed that crisis was always happening in the world, and needed decisive action to deal with. Six, strong leadership was also part of the solution. Seven, the interests of Israel and the United States were one and the same so protecting Israel was protecting America. The neoconservatives were also able to make alliances within the Republican Party, went to work in various think tanks such as the American Enterprise Institute, founded magazines such as Commentary and the Weekly Standard, started interest groups like the Project for a New American Century, as well as working with many of the established Jewish ones. They matched that with increasing positions within government. This was the institutional power that the group was able to bring to bear upon the Bush White House to argue for war with Iraq. Even though they had secondary positions such as Deputy Defense Secretary Paul Wolfowitz, Undersecretary of Defense for Policy Douglas Feith, members of the Defense Policy Board Richard Perle and Richard Adelman, the Vice President’s Chief of Staff I. Scooter Libby, and others they were able to push their Iraq agenda constantly from the very start of the administration. While they weren’t able to win the bureaucratic battle at first, after 9/11 they were able to convince the president, the vice president, and the Defense Secretary who were looking for a demonstration of American power in the Middle East after the terrorist attack, and all agreed upon Iraq was the place to do it. That was what Ahmad meant by the institutional power of the group and how they were able to shape the debate on what American was to do after 2001.

Where the book goes wrong was arguing that the neoconservatives lacked an ideology and giving them far more power within the Bush administration than they had, giving it an almost conspiratorial spin to the decision to go to war. Francis Fukuyama in America at the Crossroads, Democracy, Power and the Neoconservative Legacy provided a good overview of the ideas that shaped the neoconservatives such as a belief in regime change, unilaterialism, spreading democracy, American exceptionalism, pre-emptive wars, benevolent hegemony, and avoiding social engineering. Ahmad touches on some of those same points, but dismisses them as shared ideals. Every group has a philosophy that brings them together, but The Road to Iraq rejects this without giving a convincing reason why. In fact, Ahmad does mention that they pushed democracy and had a group of principles, but doesn’t call that an ideology. The other fault is claiming the neoconservatives were able to shape almost all elements of the argument for the Iraq War. For example, Ahmad said that the problematic intelligence on Iraq’s weapons of mass destruction was all due to the neoconservatives. He writes that the neoconservatives and Vice President Cheney were able to browbeat CIA analysts in providing reports that matched the White House’s claims about Baghdad. Documents like the October 2002 National Intelligence Estimate Ahmad said was written by an Agency officer allegedly close to Cheney, and the CIA Station Chief in Germany stopped Americans from meeting the Iraqi defector CURVEBALL who was the basis for the Iraq mobile WMD labs story because he was close to the Vice President as well. These are specious stories. Reports such as those by the Senate Select Intelligence Committee and the Robb-Silberman presidential commission showed that the U.S. intelligence agencies were rife with bad tradecraft and failed to follow through with reports and analyze them when it came to Iraq’s WMD. They came up with the bad intelligence not the White House. At the same time, The Road to Iraq gives the neoconservatives near limitless ability to manipulate intelligence, but when it came to alleged Iraq-Al Qaeda ties the CIA never really found a working and operational relationship. The administration had to create its own reports via the Pentagon when it came to that topic. On WMD, the neoconservatives are nearly omnipotent in Ahmad’s eyes, but when it came to Al Qaeda they couldn’t get any traction with the Agency. It’s hard to believe such a dichotomy. In fact, Ahmad gives them so much influence the book begins to read like a conspiracy theory at times.

Writing about the neoconservatives and the Iraq War is an important one because there are few that doubt their role, but many don’t seem to know what the group actually was and did. On the other hand, Ahmad gives an incomplete picture of their development when he argues they didn’t have a unifying ideology. He also portrayed them being able to manipulate almost all the information coming out about Iraq in the lead up to the war when they did not have that much sway. Those issues far outweigh the book’s thesis, and there are other books that do a much better job describing what the neoconservatives were about and how the U.S. decided to invade Iraq in 2003.