Review Compulsion In Religion, Saddam Hussein, Islam, and the Roots of Insurgencies In Iraq 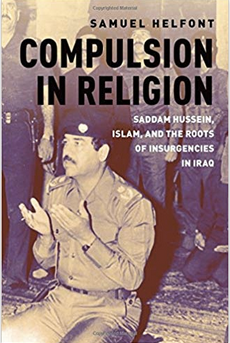 Samuel Helfont and Compulsion In Religion, Saddam Hussein, Islam, and the Roots of Insurgencies In Iraq deals with the much debated topic of the role of religion during the period of Saddam Hussein. Some have argued that Saddam embraced religion during the last few years of his regime, others believed that the Iraqi state weakened under sanctions allowing for more freedom at mosques and Islamists, others think the Baathists co-opted religion to maintain its control. Helfont takes that latter approach, but in a much more thorough way than previous authors based upon extensive research within the captured Baathist documents that now resident in the United States.


Helfont's book breaks down into four broad time periods. First, is the Baathist founder Michel Aflaq and how his ideas shaped Saddam’s stance towards Islam. Second, the 1980s when Saddam made his first effort to control the religious sphere in Iraq. Third, the 1990s when that policy came to fruition and the government was confident enough that it launched a Faith Campaign. Finally, how the 2003 U.S. invasion wiped away the institutions and bureaucracy that the Baathists created, which led to the emergence of religious, sectarian groups and an Islamist insurgency.

Michel Aflaq the Syrian founder of the Baath Party argued that Islam was the religion of the Arabs and could be used as part of his Arab nationalist cause. He wrote three essays on the topic in the 1940s and 50s that argued that Islam was the embodiment of Arab nationalism. Aflaq thought it would further the Baathists goals of creating a new Arab world. This is an important point that Helfont brings up because much of the writing about the Baathists believe that they were a secular party and had no interest in religion. To the contrary, Aflaq, who was himself a Christian, thought it was an important part of the Arab past and present that could be used to mobilize the masses. Saddam read Aflaq’s writings and would make it required reading for party members. Saddam felt it necessary to spread Aflaq’s views in Iraq because the country was facing the threat of the Iranian Revolution in 1979 and then the Iran-Iraq War in 1980, which both threatened to rally Iraq’s Shiite population against their government. That would set Baghdad’s course for the next thirty odd years.

In 1979 Saddam held a meeting with his advisers and decided that the government would take control of the religious sphere to protect the regime from threats not only emerging from Iran, but also from Wahabis and Salafis. In the 1980s Baghdad set about educating the public about the Baath Party’s view on religion, that it believed in faith, and that it was part of the drive for Arab unity. He ordered surveys and studies of all the religious men in the country to identify who was a potential threat and who could be brought into the government’s plans. Saddam then began setting up an infrastructure to monitor and use religion for the regime. That included turning the Endowments Ministry into the Religious Affairs and Endowments Ministry and putting it directly under the president’s office. Passing laws and rules that made all religious leaders and scholars pass tests to practice. Making imams and clerics clear all of their sermons with the authorities and make sure they followed government themes such as the evil of Khomeini during the Iran-Iraq War. Religious committees were created throughout each province that gave another means to observe religious leaders. Iraq would expand this program internationally with the Popular Islamic Conference that brought together clerics and religious scholars from around the world to meet in Baghdad. Another institution was the Saddam University for Islamic Studies created in 1988. All the students were given extensive background checks to make sure they would be pliant to the regime’s themes. When they graduated they would go out to mosques and communities and spread those messages. Imams and clerics were offered funding as another way to bring them into the fold. Finally, the security agencies were sent into the mosques to check what they were doing, and infiltrated religious groups to spy upon them. This was a calculated and long term program, meant to inform the government about the state of religion in the country. Then to co-opt and control the religious men over a series of years by making them pass tests, have their sermons checked, create a new cadre that were educated under the government, and monitor their activities.

There also a violent aspect to the campaign. As Helfont and other recent scholars that have looked at the Baath documents have found, Saddam preferred co-option as the first choice, but when that didn’t work he was perfectly willing to stomp out those that would not comply. The Muslim Brotherhood for example, was nearly wiped out by the security agencies, and most of its leadership either had to work secretly or went into exile. The Shiite community was harder to deal with initially because the clerics relied upon tithes, making them economically independent, had long standing religious schools, and a set hierarchy that promoted clerics. Even then, by the 1990s the government had been able to achieve widespread compliance at least, some supporters, and others that would not openly challenge the government. Those that did such as the Hakim and Sadr families had their leaders executed and others forced to leave Iraq.

By the 1990s, Saddam was confident enough that religion had been brought under control that he used it in the Gulf War and afterward launched a Faith Campaign. The West was shocked when Saddam made two speeches in 1990 calling on the Muslim world to rise up against the United States and declared a jihad. There was even more surprise when the Faith Campaign began in 1993. Many believed that either Saddam had become a committed Muslim or the government was so weakened after the war and due to sanctions that it could not stop the rise of Islamism which was sweeping across the Arab world at the time. Helfont dispels both of those showing that Saddam always had faith, but it was one shaped by Aflaq and the Baath Party, and two, the government had spent the last decade building up an entire system to control religion and get rid of any opponents that might come from that area. The jihad speeches and Faith Campaign did not come out of the blue then, but as the book clearly shows were the fruition of years of work.

The last section of Compulsion In Religion adds another new element to the history of Iraq. When the Americans invaded in 2003 they wiped out the Baathist state and the system that was in place to control religion. Without that groups that had been forced underground like the Sadrists emerged. Shiite exile groups like Dawa and the Supreme Council for the Islamic Revolution in Iraq returned. Foreign Islamists like Abu Musab al-Zarqawi came as well. None of these groups could openly operate under Saddam, but now had the freedom to do so under the Americans who were unprepared to rule Iraq. All added a new level of sectarianism and violence that would eventually throw the country into civil war by 2006, and seized nearly one-third of the country in 2014. The U.S. came into Iraq with little to no knowledge of what was going on within the country. Many believed that the Iraqi state was weak, the war would wipe it away, and the rest of Iraqi society would then be free. There was also the belief that the Shiite south would welcome the Americans and even rejoice being free of the dictatorship. Instead the Baath were still strong, and exerted control over all different aspects of society not just religion right up to 2003. The Americans would not only destroy its infrastructure but through a series of decisions like deBaathification and disbanding the military would enrage many people giving more room for militants to operate and sow dissension.

Compulsion In Religion is one of a series of recent books to use the Baathist documents to shed new light on the former regime. Helfont provides a totally original look at how Saddam observed, co-opted, repressed, and then operationalized religion to secure his rule and use it as another means to control society. He counters much of the previous research that largely dismissed religion in Iraq under the Baath. The book could also lead to a whole new range of research into how the insurgency and militias emerged in post-2003 Iraq. It’s therefore essential reading for Iraq researchers.
- June 24, 2018