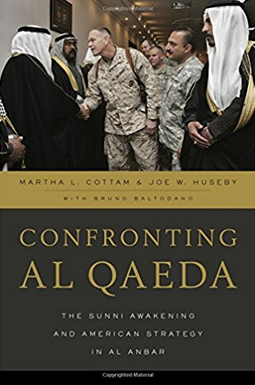 The Anbar Awakening was one of the great successes of the Iraq War when local tribes starting in Ramadi decided to work with the Americans to fight Al Qaeda in Iraq. In two years they were able to expel the insurgents from all the major cities of Anbar. That has led to a number of books in America on the topic. Confronting Al Qaeda, The Sunni Awakening and American Strategy In Al Anbar is an academic view of the Awakening that attempts to use Social Identity Theory, how groups see themselves and others and how that influences their actions, to explain why the tribes decided to join with the U.S. forces.


The book begins with an explanation of Social Identity Theory and how it applied to Anbar. The authors created several general categories that the actors in the province used to see each other, and then throughout the book explain how those images changed and led to the Awakening. In 2003 when the Americans invaded Iraq they were seen as benevolent imperialists. Many people in Anbar believed that the U.S. would need the sheikhs and tribes to govern, and therefore were not especially opposed to the war. This quickly changed with the Coalition Provisional Authority (CPA) that started deBaathification and disbanded the military. This was a threat to Anbaris as they lost their positions and livelihood. The CPA was now seen as bad imperialists who were a threat to the country. On the other hand, the Americans saw Sunnis, and especially the tribes as being Saddam loyalists and therefore did not have a role in the new Iraq the CPA was trying to create. This conflict led to the insurgency, which was perceived as allies in Anbar for trying to end the occupation. Al Qaeda in Iraq (AQI) eventually attempted to co-opt and destroy the militants and sheikhs who would not join it. AQI went from allies to barbarians, people who were savage, which opened the door to an alliance with the Americans, who by 2006 had realized their earlier mistakes and were now willing to reach out to the sheikhs and try to incorporate them into their counterinsurgency campaign. The authors argue that this change in perceptions about AQI and the U.S. was what led to the Awakening in 2006.

Confronting Iraq then goes through a history of the U.S. invasion, the CPA, how Anbaris reacted, the growth of the insurgency, and then how sheikhs first started turning against AQI in 2005, which eventually led to the Awakening in 2006. One bad part of this history, is that it covers too much. It starts with the Bush administration’s justification for the 2003 invasion and the Abu Ghraib prison abuse scandal, which has nothing to do with the subject at hand. That could have all been cut, and just started with the CPA, because it was a root cause of the resistance to the occupation. The chapter on how Anbaris saw the overthrow of Saddam and went towards the insurgency is very good because many books simply focus upon the Americans’ actions. That’s because the authors talked to 27 sheikhs and notables from Anbar and used another set of extensive interviews done by the Marines with tribal leaders. The book also covers all of Anbar, when many others just focus upon Ramadi. American outreach and tribal willingness to work with them was a process that took a lot of time to develop, and there were plenty that refused to do so, while others were strongly with the insurgency. That highlights what happened in the province was due to a developing relationship rather than just some American officer coming up with the idea and making it a reality. The unique situation in the province with all of these actors and how their images changed also show that trying to replicate the Awakening in other countries as the U.S. tried in Afghanistan are unlikely to work. To think that Anbar can be replicated in other places misses all the elements that came together to make it happen in the first place.

Confronting Al Qaeda, the Sunni Awakening and American Strategy In Al Anbar is a very short read, and for an academic book doesn’t get bogged down in theory. Social Identity and how it relates to Anbar is easy to understand. That makes the book worthwhile for a quick overview of what happened in Anbar.